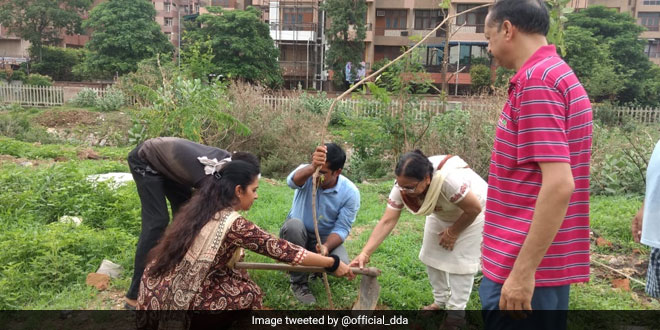 New Delhi: Concerned with the increasing levels of pollution and diminishing levels of green cover in the capital city, the Delhi Development Authority (DDA) has initiated a plantation drive. To make Delhi clean and green, the DDA has decided to plant 10 lakh saplings during the ongoing monsoon. From parks, roadside lanes, to Yamuna flood plains, the authority plans to cover different areas of the city and give it a green makeover. The green drive started from July 15, and will continue till September 30. Talking to NDTV about the plan, Mr. Shripal, Principal Commissioner, Horticulture, DDA, says,

We all are well aware about the fluctuating levels of pollution in Delhi. Also, not to forget, Delhi features in the list of 20 most polluted cities in the world. Our aim is to increase green cover and meanwhile help reduce pollution. We started from July 15 and have already planted 1.6 lakh (1,60,000) saplings. Our main focus areas are Dwarka and Rohini because there we have ample land.

Apart from Rohini and Dwarka, the authority plans to plant trees along the road, parks, bio-diversity parks, green belts, and the Yamuna flood plains. As far as type of saplings are concerned, only native saplings- neem, peepal, Arjun, Royal Poinciana, and others are being planted, reason being, these can adjust to the geographical and climatic conditions of the particular area.

We have our own horticulture department which is looking after the project. Once the plantation is done, our department only will look after the planted saplings.

Also Read: Delhi To Have A Wall Of 31 Lakh Trees Around It To Shield It From Dust Storms

Japanese Park in Rohini, Coronation Park in Burari and Astha Kunj Park in south Delhi are some of the DDA parks which already have rich green cover in India.

Towards A Greener Delhi: Plantation Drives So Far

On July 19, the Horticulture department of Dwarka conducted tree plantation drive with in Sector-3, Dwarka. The department received support from members of Resident Welfare Association (RWA) and residents.

Towards a greener Delhi!

In our efforts to build a greener Delhi, the Horticulture dept. Dwarka conducted tree plantation drive with the members of RWA and local residents in Sector-3, Dwarka. pic.twitter.com/v3tmfFY9p9

In a bid to build a city forest in sector-14, Dwarka, the horticulture department carried out a plantation drive on July 22. From Delhi Police, Super Sikh Runner Group, to director general of Tihar Jail and residents, people from different walks of life participated in the plantation rive.

Towards a greener Delhi!
In an effort to build a City Forest in Sec-14, Dwarka, the Horticulture dept. carried out a tree plantation drive in the locality. The drive saw an encouraging turnout as @DelhiPolice, Super Sikh Runner Group, DG (Tihar Jail) & citizens also took part. pic.twitter.com/Stn7I5u7Mx

To make people a part of the green drive, DDA is making use of social media by putting up notices beforehand. The next plantation drive will take place this Friday that is on July 27, at DDA Park, Sector-13, Dwarka.

DDA Horticulture dept. is organizing a tree plantation drive on 27 July 2018 at DDA Park, Sector-13, Dwarka. Be a part of this initiative to help build a greener Delhi. pic.twitter.com/snHrafW41S