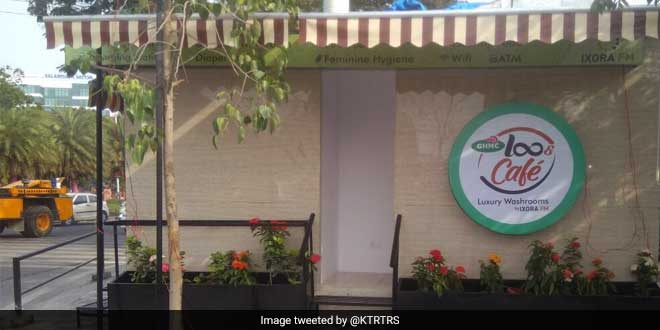 New Delhi: After the success of first Loo Café in Hyderabad, one that is equipped with three different washrooms that can be used by men, women and the disabled, a swanky café and ATM services, Greater Hyderabad Municipal Corporation (GHMC) is now preparing the ground to create 130 similar facilities in different parts of the city. This initiative also comes in the wake of Municipal Administration and Urban Development Minister KT Rama Rao’s instructions to the municipal corporation to take up the work of setting up this modern facility on priority.

The first Loo Café was constructed at Shilparamam in May this year with an estimated cost of nearly Rs 10 lakh. Now, like Shilparamam, areas such as LB Nagar, Malkajgiri, Begumpet, Kukatpally, Charminar, Musheerabad, Secunderabad and Amberpet are all preparing to get modernised Loo Cafes.

Talking to NDTV, a senior official from GHMC said,

The first Loo Café was a grand success in the city, since its launch at Shilparamam, approximately 8000 people till date have used the facilities. Now, for making 130 Loo Cafes, we have contacted a lot of private companies, many have also come on board to set up these facilities in Hyderabad. They will be maintaining the facilities by the revenue generated through cafes.

Loo Cafes are made of pre-fabricated-wood, one that is fireproof, insect-proof. Moreover, the Loo is equipped with CCTV cameras, Wi-Fi, centrally air-conditioned kind of facilities. There is also a dedicated radio station on ‘hygiene’ and Swachh Telangana, facial recognition software for enhanced security and a sanitary napkin dispenser.

The locations of Loo Cafes will also be there on an app called LooCafé Locator.

Another good thing about these facilities is that they are precast, so in future in case there is any kind of road widening or any developmental works, all we have to do is the shift and reinstalled these at other locations, added the senior official of GHMC.

In the recently conducted Swachh Survekshan 2018, Hyderabad city slipped four positions; it was ranked 27 from 22 in 2017. Now, taking a lead Greater Hyderabad Municipal Corporation is leaving no stones unturned to change the cleanliness game in their area.