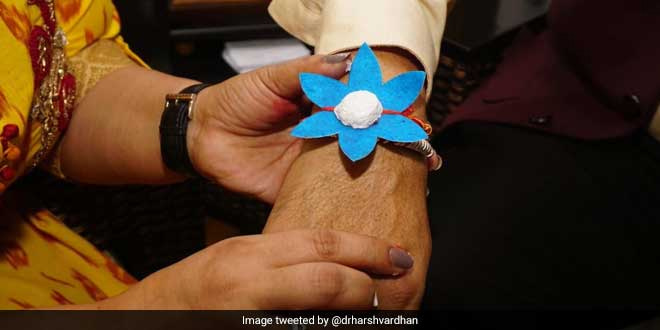 Jaipur: A silent movement to curb pollution is underway in Jaipur with thousands of people working to produce plastic-free plantable ‘SeedRakhi’ for the upcoming Raksha Bandhan festival. Artisans from women self-help groups, Ficci Ladies Organisation (FLO) and start-ups are working together to make these rakhis which can be planted and grown into a tree once it is sown in the ground. Nitin Jain, one of the co-founders of the start-up Indibni said,

Every year, 620 million rakhis are dumped in waste that never decomposes, generating 1.18 billion tonnes of carbon footprints. This made us ponder and it took us two years of intense research and hard work to bring ‘SeedRakhi’ into existence.

He added, “Around 60 crore people celebrate Raksha Bandhan across the world each year, but no one has ever thought about where does the rakhi end up after the grand celebration?”

It actually goes into the waste, adding to millions of existing tonnes of garbage. This made us ponder on the issue and thus we innovated the concept of ‘SeedRakhi’. This is a rakhi which can be sown and grown into plants, helping India become greener and cleaner.

The usual rakhi is embedded with stones and glitters and it is of no use once the celebrations are over. They are thrown away and the non-degradable waste ends up polluting the environment. As an alternative, we make our rakhis with seeds of sunflower, amaltas, papaya, rice and basil. These can be grown into plants once the festival is over, he said.

Also Read: From Chhattisgarh To Rajasthan, How Raksha Bandhan Has Brought The Gift Of Safe Sanitation For Sisters

Nitin Jain said that their start-up joined hands with FLO and other self-help groups in Nagpur, Kerala and Rajasthan to get more trained and skilled hands to bring around 30,000 such rakhis into the market this year. “We are also running camps to teach people how to make seed rakhis for a green environment”, he added. Nitin Jain said,

We are also planning to empower women self-help groups to ensure they have equal opportunities as men. We have ordered coir from a women’s organisation in Kerala while other organic material is being ordered from self-help groups in Nagpur, Maharashtra and other parts of Rajasthan.

We are also working with organic farmers in Madhya Pradesh and Rajasthan to bring our organic rakhis and organic yarn, he added. FLO, Jaipur Chairperson Shweta Chopra said,

FLO skilled women are learning the art of making seed rakhis for a sustainable living. In the long run, they shall learn what they are doing. As the project promises sustainability, we are working with this group which is producing organic seed rakhi.

The ‘SeedRakhi’ kit comes with coir and manure to sow the seed and grow the plant while making India greener and cleaner. The kit also includes a handmade paper diary which is eco-friendly and the entire packing is also done with recyclable and biodegradable paper and cloth, said Nitin Jain.

Besides Indibni, another organisation called AnanTaya, which was awarded the Unesco Seal of Excellence five times, is busy engaging local artisans to bring out handmade rakhis. As the festival falls on August 15 this year, when Independence Day is celebrated, AnanTaya has brought up tri-coloured handmade rakhis with a message — “Bonds of love: Saluting the real heroes”.

We are saluting our armed forces this Raksha Bandhan in a green way and hence we have launched exclusive rakhis dedicated to the heroes in our lives.

These rakhis are crafted by master zardozi embroiderers of Varanasi. They come with a myriad of themes — ‘Bond For Life’, ‘The Torch Bearer’, ‘Captain Param Veer’, and others. The handcrafted, recyclable, plantable, non-toxic rakhis are giving a message of sustainability and come with recycled fabrics and paper, Ms. Kasliwal said.

Also Read: Five Organisations That Plant Trees Across India On Your Behalf