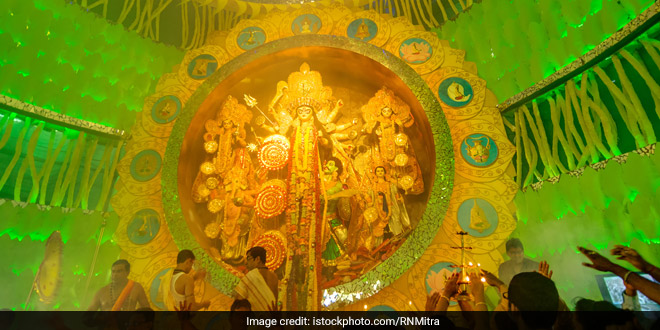 Every year, the festive season of Duga Puja in the national capital region turns to be a nightmare for the city from traffic congestion to waste generated from each of the pandals to the idol immersion mostly in Yamuna, a river that is already in dire straits. Breaking the tradition, this year, Gurugram has decided to take a green leap. Twelve Durga Puja committees this year have decided not to do idol immersion in the polluted Yamuna and instead prepare a makeshift pond for a mass immersion. Talking to NDTV, about the green initiative, Sector 56-based puja committee President said,

It is very important for us to think about the environment we live in. If the idols we are praying ends up harming the environment then these prayers are of no use. The twelve committees in Gurugram have decided to take this green step because we know how polluted Yamuna already is and we don’t want to further add to the pollution burden with the idol immersion.

Also Read: Having Replaced Close To 5 Lakh Single Use Plastic Straws, This Teenager From Gurgaon Is Slaying The Battle Against Plastic

The joint Puja Committee has decided to prepare the artificial pond in sector 56, for which the land has been provided by the local municipal councilor of the city. Explaining what will be done to the artificial pond after the immersion takes place in the pond, the President of Sector 56-based puja committee said,

We will do idol immersion in the artificial pond after removing all kinds of non-biodegradable items such as accessories. Once all the idols have been immersed, we will cover the pond with mud and plant saplings at top.

Apart from this, the pandals in the city are also making provision for compost pits that will help in managing the bio-degradable waste like flowers in the area. These compost pits will be temporarily set in each of the pandals for effective waste management.

After Four Years Of Swachh Bharat Abhiyan, Is The National Capital Delhi ODF Only On Paper?