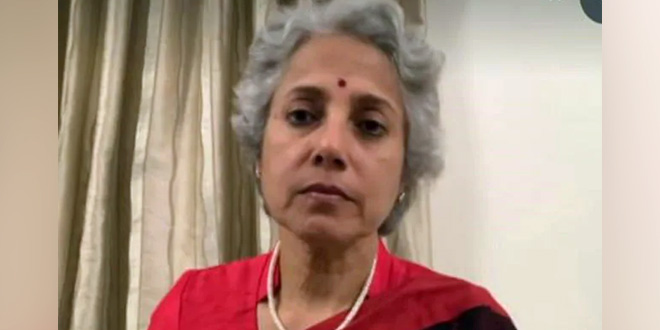 The COVID vaccines that we are using for protection in terms of reducing hospitalisations and deaths are working very well: Dr Soumya Swaminathan

New Delhi: “India has done a commendable job in vaccinating a large population, given its size and complexities involved in getting people vaccinated, WHO Chief Scientist Dr Soumya Swaminathan told NDTV. Dr Swaminathan further asserts that the idea of attaining herd immunity through natural infection to fight against COVID-19 is ‘foolish’. She says that in this way, there are huge costs to be paid, and WHO has always maintained this stand.

Dr Swaminathan further talked about the Omicron sub-variant, BA.2, she said that it is more potent than BA.1 and its transmission is more than other sub-variants.

It’s taking a grip in some countries, especially India and Denmark. The global health body cannot yet comment on the impact of Omicron as it’s a relatively new variant. Two months is too little time to know if it causes reinfection and how it affects long term immunity. We saw some studies where the blood of patients who recovered from the new variant helped with Delta infection but we don’t know if that will be true for future variants, she said.

When it comes to the debate of how current vaccines are responding to Omicron, Dr Swaminathan said that lab level studies show antibodies are less likely to neutralise the new variant. She said that this will be even less than the Delta variant, which was already less responsive to the vaccine than the previous variants, around which vaccines were developed.

Nevertheless, clinical data shows fewer cases of deaths and severe disease in vaccinated patients. There’s no need to be concerned about whether the current vaccines work on the Omicron strain, she asserts.

The vaccines that we are using for protection in terms of reducing hospitalisations and deaths are working very well. All of them help us. The elderly and vulnerable are much better protected now. It shows that the vaccines are effective and a good defence mechanism, Dr Swaminathan said.

She further explained that we shouldn’t take just the antibody response into account, but also carefully look at clinical data and study other factors like T-cell response as well.

Hybrid immunity is the strongest immunity we can have at the moment. It is when one has been infected with Omicron and has also got the vaccine doses, she said.

Dr Swaminathan also warned that the COVID-19 is an RNA virus and that it’s natural for it to keep mutating, therefore there can be more mutations in the future. Therefore, she said, the WHO has been discussing a universal vaccine that works against all variants of the virus.

A pan-coronavirus vaccine or pan-SARS vaccine is the Holy Grail and would be ideal. Scientifically, it is plausible and possible, but all these are being worked on and we will have to wait and see, she said and compared it with efforts to create a universal influenza vaccine.

Currently, the influenza shot has to be modified every year because of new strains. Heterologous booster shots, different vaccine used for a booster shot than the one taken earlier, as well intranasal vaccine to provide local mucosal immunity are also being developed to tackle other variants, she said.

Moreover, she stressed on studying the local data to take calls on booster shots.

It is ideal to have one’s own data coming from one’s own studies. It is not ideal or possible to take another country’s data and try to work out one’s strategy. Having local scientific research and data is crucial. WHO has been clear on the need to prioritise some groups to start the booster vaccines. Increasing age and underlying comorbidities are risk factors, Dr Swaminathan explained.

When asked why senior citizens with comorbidities are prioritised for booster shots when many young people also live with comorbidities, she said that the immune system wanes as one gets older and that’s why it needs additional stimulus to raise immune levels.

COVID-19 Vaccine: Here Is All We Know About Corbevax