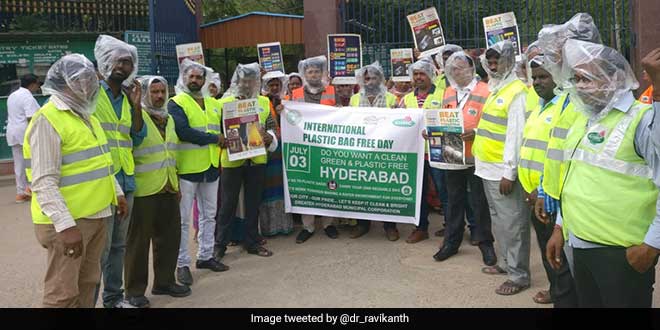 Mumbai: On an average, plastic bags are used for 25 minutes and unfortunately, they take minimum 1000 years to degrade, thus polluting world’s oceans and lands. Most of the people are unaware of the fact that one million plastic bags are used every minute. To educate people about its ill-effects and put an end to the rampant usage of plastic carry bags in Hyderabad, the civic body has organised a city-wide rally called ‘Plastic Suffocation Campaign’. Under this drive the sanitation officials tie a plastic bag around their faces and walk in public areas to mark International Plastic Bag Free Day which is celebrated on July 3 every year.

While conducting the rally, the officials will talk about the disadvantages of using plastic bags along with suggesting alternatives like jute, paper or cloth bags.

Plastic is literally choking our planet, marine life, environment and water bodies. We keep on hearing about how marine animals are becoming extinct or how tonnes of plastic is recovered from a dead marine animal. This very message has to reach people and for that our officials will give a symbolic demonstration on the streets of Hyderabad, says Zonal Commissioner Hari Chandana Dasari, Greater Hyderabad Municipal Corporation (GHMC).

The rallies started from 8 am to target people on their way to offices to attract maximum attention. It will go on till late evening. Public places like malls, bus stops, railways, markets, parks are being targeted.

Besides, the symbolic procession, the GHMC has also roped in more than 50 schools in each of the zones in the city to take a pledge against single use plastic items.

Around ten lakh students are expected to commit themselves towards a plastic bag free lifestyle to mark this day.

Maha oath on ban of single use plastic by mahavidyalaya pic.twitter.com/lEufj1bv14

“Children are most obvious option for bringing about a long-term change. If they stop using plastic now, then after a few decades a significant change will be seen. We have asked children to discontinue using plastic bottles and tiffins and instead carry a steel dabba and bottle. Many school authorities have also taken a decision to discourage usage of plastic items in school activities,” says Ms Dasari.

After a blanket ban was imposed by the Telangana government last month, all the government offices started following a plastic free life and all the plastic cutlery, bags, boxes have been removed from the offices.