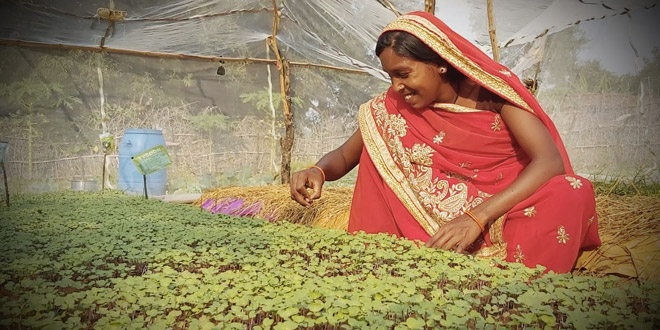 Panikas, a family of four, had become the face of a completely new form of agriculture that prevented loss and provided remunerative revenue in some of Madhya Pradesh’s poorest areas

New Delhi: In Godbahra, a small village in Madhya Pradesh’s Singrauli District, the livelihood of the majority of people depends upon agriculture and farming. As farming was viable to earn livelihood only during the monsoons, especially due to the increased challenges posed by climate change, Godbahra farmers usually used to migrate to distant places and work as daily labor to earn wages. There were times when eating two meals a day seemed a luxury for them, and Foolmati Panika and her family’s life was no different.

Foolmati and her husband are farmers and have suffered from the same fate as their fellow villagers when she decided to enroll for an orientation workshop on Agriculture Entrepreneurship with the NGO PRADAN (Professional Assistance for Development Action), while she was pregnant with her second child.

While attending the sessions, I thought of the idea of a centralised vegetable nursery because local farmers did not have a reliable place to buy seeds or saplings, Foolmati told NDTV.

Slowly, but steadily, she started believing in her ability to change the prospect of vegetable cultivation, she offered her services to all the nearby five villages, where she now operates in along with the Krishi Sakhi to ensure a reasonable income for vegetable farmers.

Collecting bamboo, constructing the structure, and arranging nursery beds all seemed like difficult tasks for me to complete alone, especially in a pregnant state. So I seeked help and support from my husband and Veena Self Help Group sisters. Together, we managed to set up a greenhouse capable of holding 40,000 saplings. Tomato, chilli, brinjal, cabbage, and cauliflower were planted, and my nursery was ready with 25,000 beautiful green saplings, she explained.

Foolmati planted 10,000 trees in coco peat, a soil created from coconut husk pith, and the rest in raised beds. VAM, Pseudomonas, Trichoderma, and cow dung were the only organic materials she used.

With her relentless efforts, Foolmati managed to make more than Rs 40,000 in three months with an initial expenditure of Rs 12,500 in seeds and other inputs.

Panikas, a family of four, had become the face of a completely new form of agriculture that prevented loss and provided remunerative revenue in some of Madhya Pradesh’s poorest areas, while Foolmati’s husband eyed an 80,000-capacity nursery for the coming Monsoon, and in just one month, they helped 550 farmers from five separate villages in Madhya Pradesh earn their livelihoods.

I wasn’t satisfied with just selling the saplings, Foolmati said.

Therefore, she checked up with the Krishi Sakhis, who assist farmers in accessing centralised nurseries and are eventually groomed to become entrepreneurs, to make sure the farmers were following the farming process correctly.

Over video conversations, I checked on the health of the plants and produce with the farmers, she explained.

Foolmati’s prompt action in the form of a centralised nursery assisted them all in minimising their losses. The water resources in Sarai tehsil had risen as a result of Foolmati’s efforts, followed by the villagers’ and panchayat members’ collective planning, which was aided by PRADAN.

Slowly but steadily, I began to believe in my potential to improve the prospects of vegetable agriculture, Foolmati explained.

The iron lady managed to achieve all this, while she was expecting her second child. Foolmati single-handedly changed the face of the village, with the help of PRADAN’s rural development program.

My village, which struggled to feed their families in all other seasons except monsoon, has now become self-sufficient in no time, this is the story of new beginnings for me, she told NDTV.

Foolmati gave birth to Arpit, her baby boy, as her husband looked for an 80,000-capacity nursery for the upcoming Monsoon. And the Panikas, a family of four, has become the face of a completely new style of agriculture that avoids loss and guarantees remunerative income in some of the poverty hotbeds of remote Madhya Pradesh, all thanks to a woman who decided its time for a change.

Related Topics:
Women’s Day
Up Next

International Women’s Day 2022: From Suing Indian Government To Knocking Doors Of The UN, This Teenage Climate Warrior Is Calling To Save The Earth