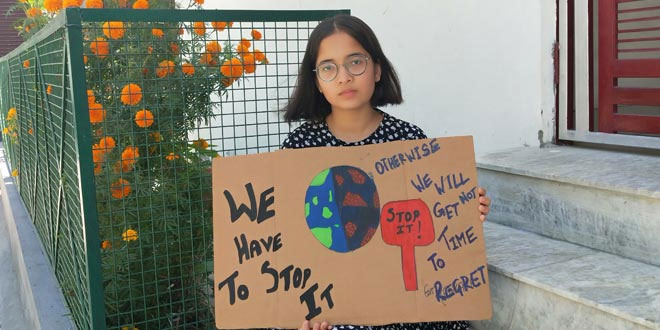 International Women's Day 2022: In 2021, Ridhima and 13 other youth activists filed a legal petition to the UN secretary-general urging him to declare a “system-wide climate emergency”

New Delhi: In March 2017, a nine-year-old girl from Uttarakhand grabbed headlines as she filed a petition in the National Green Tribunal (NGT) against the inaction of the government to mitigate climate change and protect the environment. The petition urged NGT to order the government “to take effective, science-based action to reduce and minimise the adverse impacts of climate change in the country.” However, after almost two years, in 2019, NGT dismissed the case, reasoning that climate change is already covered in the process of impact assessments under the Environment Protection Act of 1986.

Ridhima Pandey, the young activist was barely 5-year-old when she saw devastating visuals of Uttarakhand floods in 2013 and that’s when she got her first lesson about the environment. Recalling the time, Ridhima said,

Back then my father used to work for Wildlife Conservation Trust and when flash floods occurred in Kedarnath, he went out to rescue animals. Back home, my mother was consuming every piece of news related to the floods. It was like a basic talking point of my house at that time. I remember sitting beside my mom and asking, “What’s happening?” On the television, I saw houses being washed away and people crying because they have lost their family members and needed help. I had never seen that kind of destruction in my life so it was new and scary and obviously, I had questions. My mom briefly explained to me what flash floods are.

From then on, Ridhima started having nightmares of floods, cloud burst, losing her house and parents to heavy rain, and eventually dying due to flood. A loud thunder at night would make her anxious. The young girl didn’t want to live in this constant fear so she approached her parents who introduced her to the concept of global warming and how it results in flash floods.

If my memory serves me right, it was 2015, when I started learning about climate change in-depth, reading and watching videos and my parents answering my questions. At that time, the 7-year-old me saw only cars emitting pollutants and I used to wonder, how can driving cars change the temperature of such big Earth! Even if the temperature is changing, why is that a bad thing? So, my mother explained how our actions like the burning of fossil fuels result in global warming and climate change. Also, an event of a flash flood is not the only repercussion; there are other issues as well like pollution, and temperature rise.

Determined to bring back a smile on the face of planet Earth, Ridhima started taking small steps like avoiding single-use plastic, reducing her carbon footprint by turning off lights and appliances when not in use, saving water, going to tuition on cycle, and urging her parents to do the same.

Despite making efforts, I couldn’t see the desired changes and that’s when I realised the gravity of the issue and filed a petition in 2017. Since my mother works in the Forest Department and my father also works on the ground for the ecosystem, they know how the system works and how environmental clearances are given to various projects, sometimes for the government’s own benefit. I, as a citizen, felt that government has the power to make and amend laws and act against polluting industries but it wasn’t doing enough, as promised in Paris Agreement 2015. Hence, the petition called out the government’s inaction and urged to take concrete measures, says Ridhima.

And that’s when began Ridhima’s journey as a climate activist and she went on to participate in climate strikes and start a conversation. Ridhima believes she is part of a population segment that is most vulnerable to climate change but is not part of the decision-making process.

In 2019, 11-year-old Ridhima along with 15 other young climate warriors, including Greta Thunberg, from 12 countries around the world presented a landmark official complaint to the United Nations Committee on the Rights of the Child to protest the lack of government action on the climate crisis. In her address, Ridhima called for urgent action and said,

I am here because I want all the global leaders to do something to stop climate change because if it not going to be stopped, it’s going to harm our future.

In 2021, Ridhima and 13 other youth activists filed a legal petition to the UN secretary-general urging him to declare a “system-wide climate emergency”. But what’s the point of striking and petitioning? Does that bring any change on the ground? Responding to the obvious questions, Ridhima, who is currently 14-year-old, said,

A strike creates awareness about the issue at hand, mobilises and motivates people to come out in big numbers in their cities and countries. We have seen our tribe grow with each strike. And we have brought change like in Kerala, people were protesting against the petroleum project proposed by the government. We strike, wrote letters, talked about it, opened a conversation and the government took the project back. Filing petitions, questioning the government and expressing our views are some of our rights. Also, this is the least we can do to control the global warming and rising temperature.

Ridhima, who hails from Haridwar in Uttarakhand, home to River Ganga says that the Namami Gange project, designed to clean up river Ganga is bearing little to no results. She believes that instead of fixing the issue from the start point, the government is focusing on collecting the waste from the river.

Why not ban single-use plastic completely, especially around the river? Why not stop people and penalise them for throwing waste in and around the river? The government is spending money on cleaning waste. But what’s the point if people will continue to litter?, asks Ridhima.

While signing off, the young activist reiterated the common saying “every drop count” and urged people to take small steps to bring about a bigger change. Recalling an incident, she said, 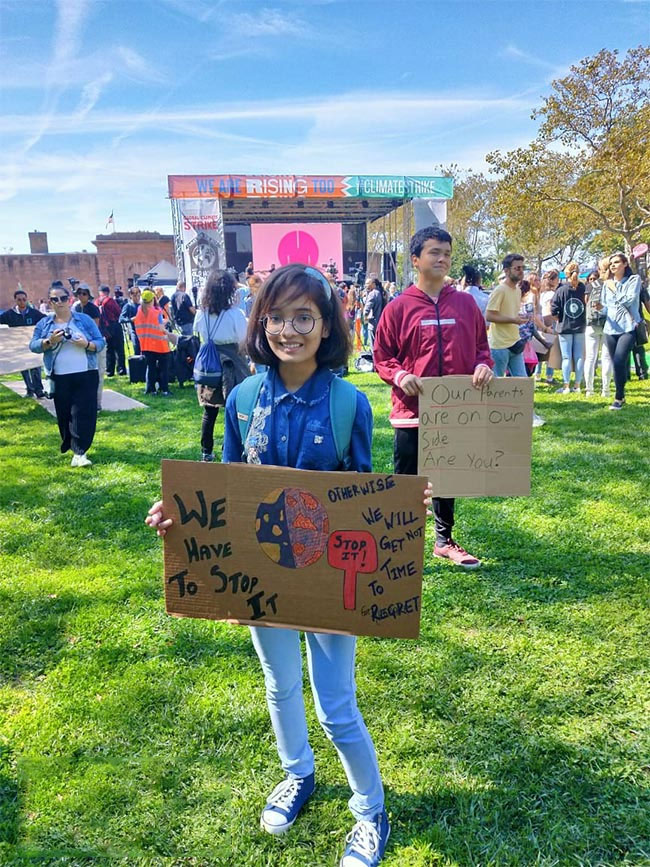 Once when I stopped a senior from throwing a wrapper outside the window of a school bus, she replied, ‘Kaunsa mere akele ke karne se tera bharat saaf ho jayega? (How will your India become a clean country by me not littering around?)’. It is the mentality of people that their actions alone won’t change anything. No action is small or insignificant. Together we can bring a change. We have to stop it (devastation) otherwise we will not get time to regret.

Dinesh Pandey, Ridhima’s father, is proud of the awareness, dedication and love his teenage daughter holds towards the environment. Mr Pandey who used to work for the protection of wildlife says,

I feel happy seeing that my daughter is doing what I couldn’t. Currently, I am practising law so that going forward I can support Ridhima and work legally for the environment. It is our planet and our shared responsibility to protect and nurture it.

International Women’s Day 2022: Meet Foolmati, A Farmer Who Changed The Face Of Agriculture In Her State