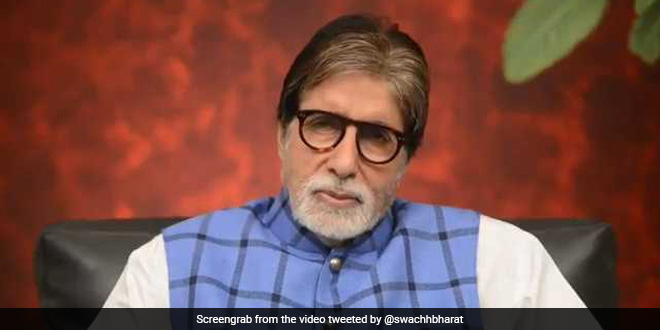 Looking the stupendous success of Swachh Bharat, it is quite clear that it is not just a government scheme. Government may be managing the programme, but it is truly a jan andolan (people’s movement).

Calling himself as Swachhta worker, he urged people to continue backing this campaign and taking it further. He asked people to ensure that apart from constructing toilets, everyone should ensure that their family members are using the toilets regularly and keep it clean and pay attention to its maintenance. Mr Bachchan goes on to say,

A twin pit toilet is constructed by creating two pit holes around the toilet, one of which stays functional while the other is closed until the pit in operation is filled to capacity with human waste. The filled pit is then closed for composting, and the second pit is put to use. The waste collected in pit one is then converted into bio-fertiliser through composting.

Also Read: ‘This Is Not Human Waste, This Is Gold’, Says Actor Akshay Kumar Urging People To Build Twin Pit Toilet And Use Human Waste In Farming

With 96 per cent of sanitation coverage today from mere 38 per cent back in 2014 and construction of nearly 9 crore toilets in four years, India celebrated these achievements in the sanitation field on the occasion of World Toilet Day on November 19. Since the launch of Swachh Bharat Abhiyan, more than 5 lakh villages, 530 districts, 25 states and Union Territories have achieved the open defecation free (ODF) status. This year, the Ministry of Drinking Water and Sanitation (MoDW&S) decided to celebrate November 19 as “Swachh Bharat World Toilet Day ” and started a special ‘World Toilet Day Contest’ from November 9 to November 19, wherein all districts and states in India were asked to conduct various sanitation related activities so that individuals can be motivated to do their best in achieving country’s open defecation free targets by October 2, 2019 and to achieve ODF sustainability in the areas that have successfully achieved the ODF status.