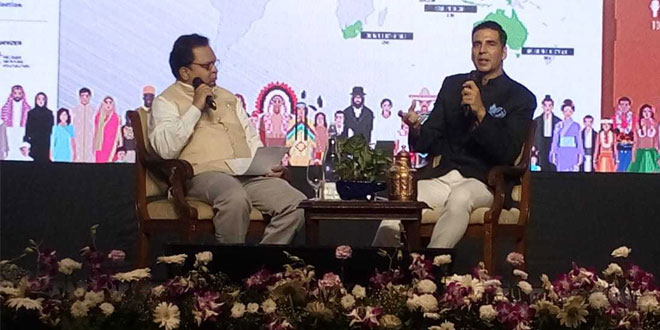 New Delhi: As a part of the World Toilet Day celebrations, actor and Swachh Bharat Ambassador Akshay Kumar interacted with the audience to discuss the present conditions and realities of sanitation in India at the World Toilet Summit-2018 in Mumbai. The actor talked about movies being the ultimate platform for creating awareness about a social issue and how access to toilets affects women’s health and safety. The actor noted,

Half the people in India know a toilet as an everyday convenience. But a toilet is still a luxury to the other half. Our mothers and sisters in rural India are suffering.

Akshay Kumar has worked in movies Toilet – Ek Prem Katha and PadMan that promote social causes like ending open defecation and need for menstrual hygiene. Mr. Kumar said that these movies had a great impact on the citizens of both rural and urban India and worked well by generating the awareness that was needed. He went on to explain the magnitude of the problem of those who do not have access to clean toilets or even basic sanitation facilities. 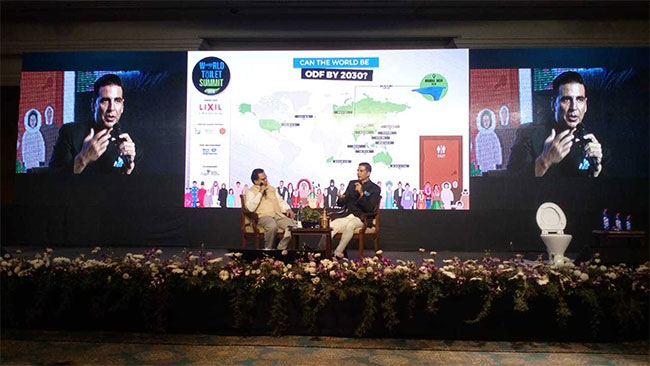 Akshay Kumar at World Toilet Summit: I have seen great impact of my film Toilet – Ek Prem Katha, it inspired people to construct toilets in their own home.

The actor pointed out that there is still a stigma attached to using or even building toilets at home, which has adverse effects on public hygiene and sanitation. As per United Nations statistics, 892 million people worldwide still defecate in the open, which means on a massive scale, human faeces is not being treated. It is essential to treat and manage the human waste as it can cause deadly diseases.

Mr. Kumar stressed on the need to maintain the existing toilets. He pointed out that although we have public toilets nationwide but the problem of cleanliness and lack of certain basic facilities remain an issue.

I feel there are enough public toilets in India but these are not well-maintained or not well-equipped for women, when it comes to sanitary pads. We need to work on that.

Earlier in April, Akshay Kumar had sponsored a mobile toilet near the famous Juhu beach in Mumbai, months after his wife and actor turned author, Twinkle Khanna tweeted a picture of a man defecating at another sea shore in Mumbai. The actor also offered the Brihanmumbai Municipal Corporation (BMC) to set-up the toilet by bearing all its expenses.

World Toilet Day is observed on November 19 round the globe, to create awareness about the open defecation, sanitation and hygiene problems in the world.

This year the theme for World Toilet Day is based on – “When nature calls, we need a toilet..but billions don’t have one.” This narrative enlightens the adverse realities of hygiene, sanitation and open defecation globally. World Toilet Day is about inspiring action to tackle the global sanitation crisis. The world is way behind on its ambition to achieve the Sustainable Development Goal 6 (SDG 6), to ensure availability and sustainable management of sanitation and water for all by 2030. Today, 4.5 billion live without a safe toilet and 892 million people still practise open defecation.