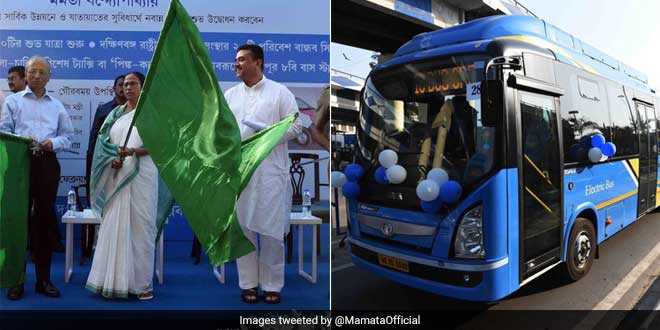 New Delhi: On Wednesday, Kolkata, the city of joy, climbs took another green ladder step by flagging off 20 electric buses on three major routes of the city – Airport-Joka, Shyambazar-Nabanna, and Tollygunge-Bidhannagar. The city has already 22 per cent of its daily travel dependent on electric transport services such as Metro, Tram, and Suburban and Circular rail systems. With this new move of electrifying the bus transport, which covers 56 per cent of the daily travel trips in the city, Kolkata will become one of the only cities in India with most of its transport dependent on electricity.

With Electric Buses and CNG Buses being added, West Bengal will be the pioneer in introducing environment-friendly transportation in such large scale.

With 80 Electric Buses and 20 CNG Buses being added, West Bengal is the pioneer in introducing environment-friendly transportation in such large scale pic.twitter.com/QACjlmKx1c

All About The New Electric Buses In Kolkata

These new zero-emission Electric buses are air-conditioned, have modern interiors and comfortable seats for 31 passengers. To make the journey more comfortable for the passengers, these buses also come with air suspension for both front and rear axles. The buses are equipped with Li-Ion battery that offers a range of up to 150 km on a single charge. The Li-ion batteries have been placed on the rooftop to prevent breakdown due to waterlogging and are liquid cooled to maintain the temperature within an optimum range thereby ensuring longer life span.

Moreover, integrated electric motor generator in the bus with a peak power of 328 bhp can deliver 194 bhp continuously ensuring effortless driving in congested roads and frequent start stops needing no shifting of gears. The charging facilities for these buses have been constructed at 17 different depots of the West Bengal Transport Corporation.

The homegrown company Tata Motors will be supplying 80 electric buses into the city in a phased manner. The order includes 40 units of 9-metre Ultra Electric AC E-buses and 40 units of 12-metre e-buses, out of which 20 units of the 9-metre e-buses have already been delivered in the city.

Lauding this move by Tata Motors and Kolkata, Centre for Science and Environment (CSE), the New Delhi-based research and advocacy body said that West Bengal government’s proactive move to phase in the electric bus programme will help the city to lead the zero-emission pathway in the country.

Anumita Roychowdhury, Executive Director, Research and Advocacy, CSE added, “Kolkata has a much bigger opportunity than most other metro cities in India to phase in zero emissions mobility quicker because of its inherent advantages of very strong public transport culture and short average travel distances – this makes the city most suitable for electric vehicles. The faster Kolkata moves away from internal combustion engines in the targeted and high mileage segments, the more health benefits will be ensured in the city.”

According to a recently released report by Centre For Science and Environment, West Bengal has the highest air pollution based deaths in India. It stated that nearly 40 per cent of air pollution deaths in 2017 were reported from Uttar Pradesh, West Bengal and Maharashtra.

Moreover, after Diwali last year, Kolkata surpassed Delhi in becoming the most polluted metropolitan city of India. Even in 2019, the city of joy’s Air Quality Index hoovered in between ‘very poor’ and ‘severe’ category.

Keeping the Air Pollution history in mind, the recent move towards electric vehicles will give Kolkata some sigh of relief.

Now, It’s Possible To Charge Your Electric Vehicle Within 15 Minutes, Thanks To This Start Up’s Low-Cost Innovation