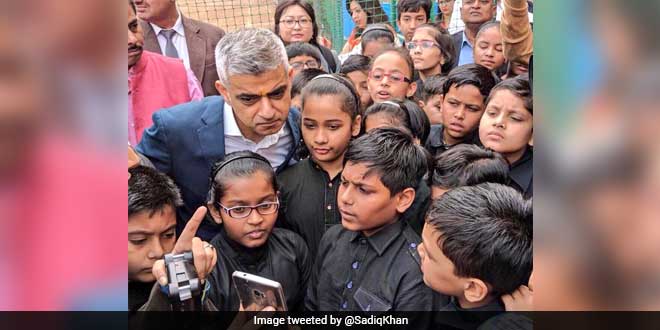 New Delhi: London Mayor Sadiq Khan, on a visit to Delhi on a “severe” smoggy day, launched a global network to find solutions to improve worsening air quality in cities worldwide. Bengaluru Mayor R. Sampath Raj will co-chair with Mr Khan the newly formed ‘Air Quality Network’ under the C40 network to tackle rising air pollution. The decision to work together on the issue of air pollution was announced at a meeting held by Mayors here on Tuesday. C40 is a network of major cities like London, Paris, Los Angeles and Copenhagen working together to reduce greenhouse emissions and creating models that other cities and governments can adopt. With support from the network of cities, London will set up a trial $1 million worth street-by-street air monitoring system to analyse pollution in over 1,000 areas in London including in schools, hospitals, construction sites and busy roads, the statement said.

All the members will have access to the learnings from the Air Quality Network.

The results from London’s new air quality sensor monitoring trial will be used to target policies, engaging citizens in cleaning up London’s air, and will be shared with Bengaluru and other cities in the C40 Air Quality Network. Air pollution is a global problem that harms the lives of millions of people and only by working together will we help beat this international health crisis, it stated.

Mr Khan said he was “proud to announce that London and Bengaluru will be leading a new air quality partnership. We hope to work with key cities across the world and in India, including Delhi.” Mr Khan is on a six-day trip to India and Pakistan in a bid to improve London’s trade relations with the two countries. He arrived in Mumbai on Sunday.

Here at Maharaja Agrasain Public School in Delhi – where I met pupils studying air pollution, and announced a new @c40cities partnership, led by London and Bengaluru, to help protect the next generation. ???????? pic.twitter.com/WVlmHM6reE

“Thank you to London’s Hindu community for the huge contribution you make to our city,” he tweeted, posting a video of his visit.

On Day 4 Of India vs Sri Lanka Test Match, Suranga Lakmal And Mohammed Shami Vomit Due To Delhi’s Notorious Smog