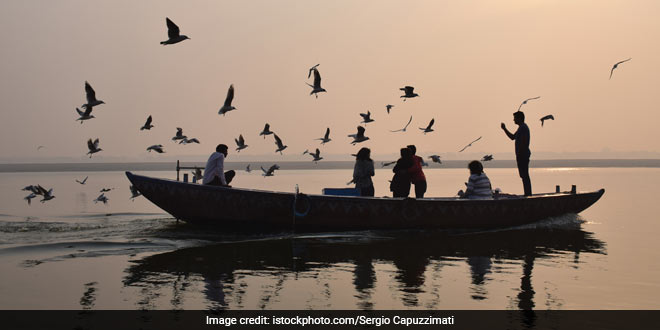 Kolkata: The Hooghly or Kati-Ganga flows south for about 260 km into the Bay of Bengal, through a heavy industrialised area with more than half of West Bengal’s population. Household wastewater and industrial effluents flowing directly into the river are the major causes of its pollution. Tolly Nullah, a British-era canal, discharges a large quantity of sewage waste into the river. Under the pollution abatement and rehabilitation works, three sewage treatment plants will be set up with funds from the Namami Gange to stop the flow of sewage from Tolly Nullah into the Hooghly.

It has been converted into a big nullah. At one point it was called Adi Ganga. So, it was the king of the river. But, it has degenerated over a period of time. We have some problem with that project. 26 MLD STP we want to construct and then intercept this sewage to that STP and clean it up. We have sanctioned the project and the state is calling up tender.

There are certain issues of encroachment and people settling along that nullah, so I think all these things are taken care up by the state and local authorities and we will ground this project.

A few kilometres from Kolkata is Barrackpur, the site of the first cantonment of British East India Company.

Located on the banks of Hooghly, Barrackpur is now a densely populated city. It lacks sewage treatment plants, and consequently, its wastewater flows directly into the river. Under the Namami Gange programme, work on 150 km long sewage network is going on at a rapid pace. It will connect over 35,000 households.

Chandranath Mukherjee, Asst. Construction Manager, L&T said, “Dirty wastewater was flowing directly into the Ganga. After completion of this project, this will not happen. Sewage will be treated and solid waste will be used for the agricultural purpose as organic manure. Treated water will be diverted to the Ganga through a canal”.

When we were talking to people about the benefits of this project – cleanliness and eradication of mosquitoes by treating of wastewater – they were positive about it. The locals are cooperating with us.

As part of its pollution abatement initiatives, the National Mission for Clean Ganga has also constructed and renovated old Ganga ghats in Barrackpur and its adjoining areas. Under the Namami Gange programme, various activities such as treatment of municipal sewage, treatment of industrial affluent, river surface cleaning, ghats and crematoria work have been taken up. All these efforts aim towards fulfilling the objective of Namami Gange, which is a continuous flow and unpolluted flow of the Ganga.