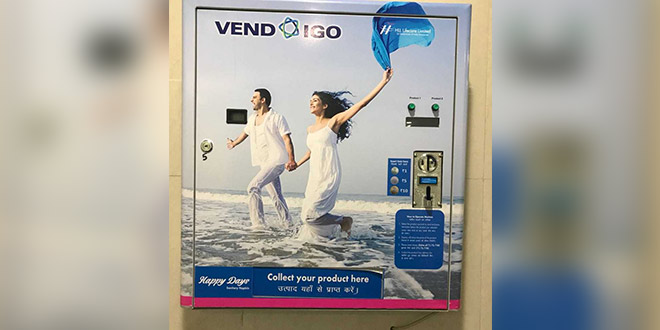 New Delhi: Women can now get sanitary napkins at a subsidised rate from vending machines installed at 14 public toilets in south Delhi markets, the area’s civic body said on Monday. The South Delhi Municipal Corporation (SDMC) said out of these toilets, three are ‘pink toilets’ which are meant exclusively for women. “Sanitary vending machines at 14 toilets situated in various markets were today made functional. The rest 11 toilets are partially being converted into pink toilets (painted pink) as well,” the SDMC said in a statement.

Napkins will be easily available at a subsidised rate of Rs 5 from the vending machines. The toilets are also being provided with incinerator machines for decimation of the used napkins. This was felt necessary to ensure cleanliness in and around the toilets, it said.

The pink toilets were developed with the aim to provide safe public conveniences for women with separate baby-feeding and changing area in its premises. Adequate arrangement for security, safety, electricity and water supply, apart from proper maintenance of the fixtures has also been made.

Pink toilets are currently functional at markets in PVR Vikaspuri, Lajpat Nagar and GK Part-I, the civic body said. The vending machines were made functional as part of the ongoing sanitation themed fortnight-long activities under the Swachh Bharat Mission.

The SDMC also said a drive to weed out plastic bags was underway in all of its four zones. “During the first nine days of the drive, around 700 kg of plastic bags has been seized; the major seizure of 400 kg is from the South Zone and 170 Kg from the West Zone,” the statement said. The SDMC in its effort to supplement its waste management has encouraged the RWAs and residents to make use of the wet waste for preparation of compost.