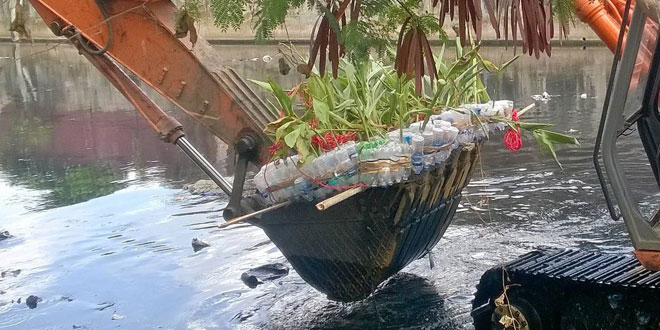 As a resident of Mumbai, if you visit the Poisar river near Hiranandani Heritage, Kandivali you may find an artistic model. But as you go closer, you will see a bundle of old plastic bottles and plants weaved together in a mop like structure. This mop like structure could actually be an answer to the problem of river pollution. A group of environment conscious people on May 28 constructed a floating island or a makeshift mop out of plastic bottles and uprooted plants to clean Mumbai’s one of the most polluted rivers – Poisar.

On a Sunday morning, 15 people from a group called River Marchers divided themselves into two groups and marched on to contribute their bit for Swachh Bharat Abhiyan. Putting governments educative campaign on waste management into practice, one group collected 500 plastic bottles from restaurants, households and ragpickers with an aim to recycle them. Whereas another group embarked on a 14 kilometre journey from Kandivali to Andheri to collect plants uprooted due to metro construction. 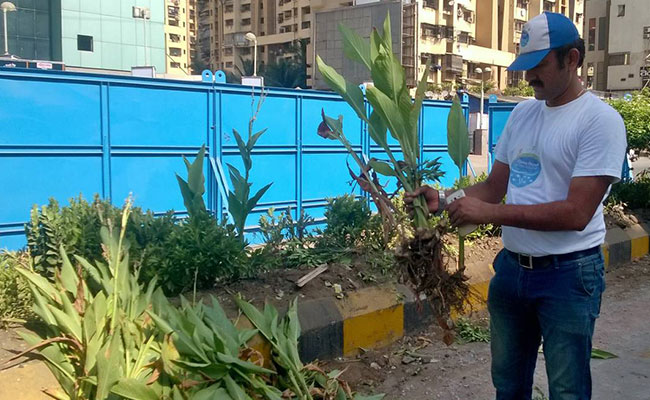 Uprooted plants were used to make the floating island

About 7.30 am the volunteers from River March group gathered at Kandivali with plastic bottles and canna indica- a wetland plant species and within 5 hours they created a 25- square feet floating wetland. The wetland was placed in the Poisar stretch behind Hiranandani Heritage complex by River Marchers, a group which aims to clean four rivers of Mumbai- Poisar, Mithi, Oshiwara and Dahisar.

We had gone to various companies with this idea but it turned out to be very expensive. So a group of us googled the technique and then all we had to do was, get the materials, says Tejas Shah, one of the volunteers.

The process was simple says Tejas, “We made holes in the bottles and infiltrated the plants into them. We placed the bottles upside down to ensure the plants do not fall off. And finally we tied with ropes,”

The volunteers made the floating island out of 500 plastic bottles

The pilot project is in its experimental stage and the results will be out only after 4-5 months, adds Tejas.

Once you put this (floating wetlands) onto any water body they pull out nitrogen and phosphorous and help in reducing the water contamination levels, says Swati Singh Sambyal Programme Manager, Environmental Governance (Municipal Solid Waste) from Centre for Science and Environment.

She further adds, “Though time consuming; these wetlands are a sustainable alternative to the existing chemical methods of removing effluents from water bodies.” 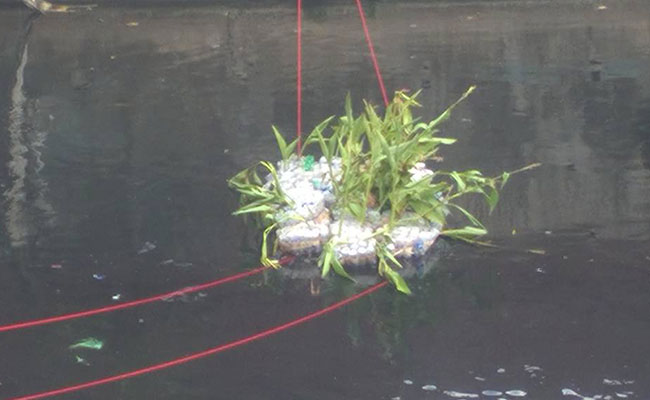 The river marchers have already submitted a proposal to the Storm-Water Drain department (SWD) of the city’s civic body. As per the proposal, these volunteers have suggested creating these wetlands to clean 1.5 kilometre of stretch of Poisar.

The SWD department has forwarded the proposal to the Municipal Corporation of Greater Mumbai (MCGM).

We welcome such positive efforts from Mumbaikars. The corporation is in constant touch with the MCGM, said Laxman Vhatka, Chief Engineer, SWD department.

Why Poisar Needs An Immediate Attention

As per a report by the Environmental Policy and Research India (EPRI) in 2014-15, Poisar is polluted over 100 times the prescribed safety limit. It was found that the oxygen levels required for the river to sustain life forms were dangerously low. The report further highlighted that issues like floating garbage were blocking up the flow of the river due to indiscriminate waste disposal.

It is also posing to be serious health problem for the people living along its banks, “Lack of toilets leads to open defecation along the river and people even access the river water to bathe and for other daily chores which eventually contaminate the river beds,” says Avick Sil, Regional Director of EPRI.

The river marchers had earlier conducted a cleanliness drive to purify Poisar over a period of five Sundays under the Swachh Nadi (River) Abhiyan. They were successful of removing 1.7 Lakh Kilos Of Garbage in five kilometres stretch of the river.