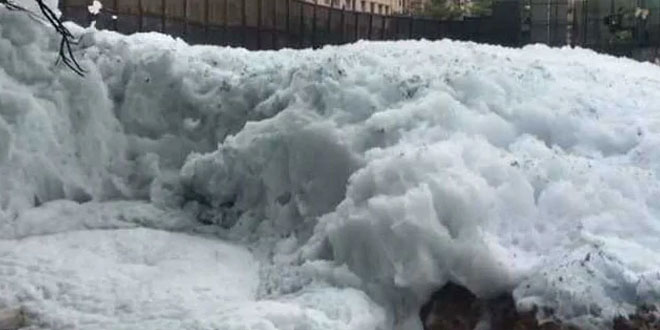 New Delhi: The National Green Tribunal (NGT) on Thursday imposed Rs. 50 crore penalty on Karnataka for allegedly neglecting two lakes, Bellandur and Varthur, in the city’s southeast suburb, said non-governmental organisation Namma Bengaluru Foundation (NBF) here. “Karnataka has been directed to pay Rs 50 crore as environmental compensation or penalty, which shall be deposited with the Central Pollution Control Board (CPCB) for restoring the environment,” said the Foundation in a statement, citing the Tribunal order.

The Tribunal also directed the city corporation to pay Rs 25 crore to the CPCB and transfer Rs 10 crore to the Karnataka State Pollution Control Board (KPSCB) for the logistics of Justice Santosh Hegde Committee which was formed to oversee the implementation of its orders. The Tribunal has directed the state government to furnish a performance guarantee up to Rs 100 crore to ensure execution of the action plan.

“State of Karnataka will also undertake to pay Rs 100 crore if there is a failure to implement the plan,” said Foundation’s senior counsel Sajan Poovayya, who appeared for the petitioners, including the Foundation (NBF). The lakes, about 20km from the city centre, are filled up with sewage, effluents, solid municipal waste, construction and demolition waste and weed, leaving no clean water in them.

Also Read: An Innovation To Prevent Waste From Flowing Into The Sea, Rivers And Lakes, Can This Solve Water Pollution Problem?

The twin lakes have been in the news due to immense foaming and frothing as they became the largest septic tanks in the city due to sheer callousness and indifference of the authorities concerned.

Declaring the grave situation as an environmental emergency, the Tribunal noted that the authorities concerned have failed to discharge their obligations to the society and their dues. “The colossal neglect has caused immense harm to citizens and brunt of which will be borne by generations. There is no justification for such environmental loss,” said the green tribunal.

On the basis of various inquiry reports, including the Panjwani Committee, the Tribunal found the state government negligent in protecting its lakes and in keeping the stormwater drains free from encroachment.

“As water pollution is a criminal offence, measures have to be taken to control such pollution and close polluting units,” said the Tribunal, adding that the officers charged with the duties are accountable for their failures.
The watchdog also directed the state government to ensure no pollutant or waste is discharged into the water bodies, lakes and streams.

‘Pollution’s Dangers Can Be Passed On To Next Generation’, Finds A Study