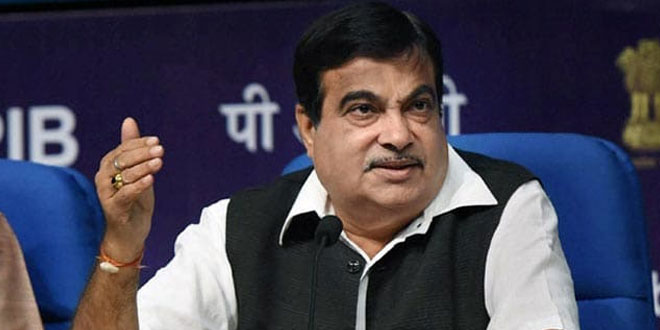 Haridwar: Union Minister for Water Resources Nitin Gadkari on Thursday said there is no dearth of funds for the implementation of projects under Namami Gange. Mr. Gadkari, who was here for the foundation laying and inauguration of a slew of national highway projects worth nearly Rs 5,555 crore, was addressing a gathering at Chandi Ghat here.

There is no dearth of funds for the Namami Gange projects aimed at cleaning the river and maintaining its uninterrupted flow and the Centre will ensure that nothing impedes their implementation, Mr. Gadkari said. Ban Ganga in Laksar will be revived to add to the flow of water in the Ganga, he said.

He also sought individual monetary contributions from people to the mission assuring them that their contribution will be credited straight into the Namami Gange accounts. Speaking about the status of the Namami Gange projects in Uttarakhand, he said out of 33 sewage treatment plants to be set up in the state work on 19 had already been completed, work is in progress on 12 and two are in the pipeline for Dehradun.

Har ki Pauri will be beautified at a cost of Rs. 40 crore, the Union minister said. Speaking of his future plans, he said he dreamt of travelling in a motor boat from Gangotri to Ganga Sagar.

A plan is being worked out in that direction, he added. On the all-weather roads project to Char Dham, Mr. Gadkari said by this time he would have inaugurated it if the Supreme Court had not intervened raising some environmental concerns.

He, however, hoped work on the project under which 900 kilometre of roads are to be built in Uttarakhand at a cost of Rs 12,000 crore will soon be started. National Highway projects whose foundation stones were laid by Mr. Gadkari included Haridwar-Laltappar, Laltappar-Mohkampur, Purkaji-Laksar-Haridwar, Haridwar-Nagina, Roorkee-Chutmalpur-Gagalhedi, Chutmalpur-Ganeshpur roads besides construction of a bridge over Mayapuri scap channel on Haridwar national highway.

Reconstructed Roshnabad-Biharigarh motor road and three bridges on Jollygrant-Thano-Raipur-Sahastradhara road were among the projects inaugurated by Mr. Gadkari.

100 Per Cent Mechanised Cleaning Going To Be A Reality In Railways: Railway Minister Piyush Goyal