Mumbai: It is 6.45 in the morning and Mumbai, the city that never sleeps, is gearing up for yet another action-packed day of traffic, chaos and people rushing to their workplace. Ramcharan, who has been defecating in the open for the last 23 years is getting prepped for his morning chore out of habit. Carrying a mug, he carefully steps onto the steep rocks of Worli Sea Face to defecate. Meanwhile, for Shanti, who lives 16 kilometres away in a Govandi slum, toilet continues to remain a luxury as she has to wait for nearly 20 minutes for her turn to use a public toilet. People like Ramcharan and Shanti mirror the reality of Mumbai’s Open Defecation Free (ODF) status. 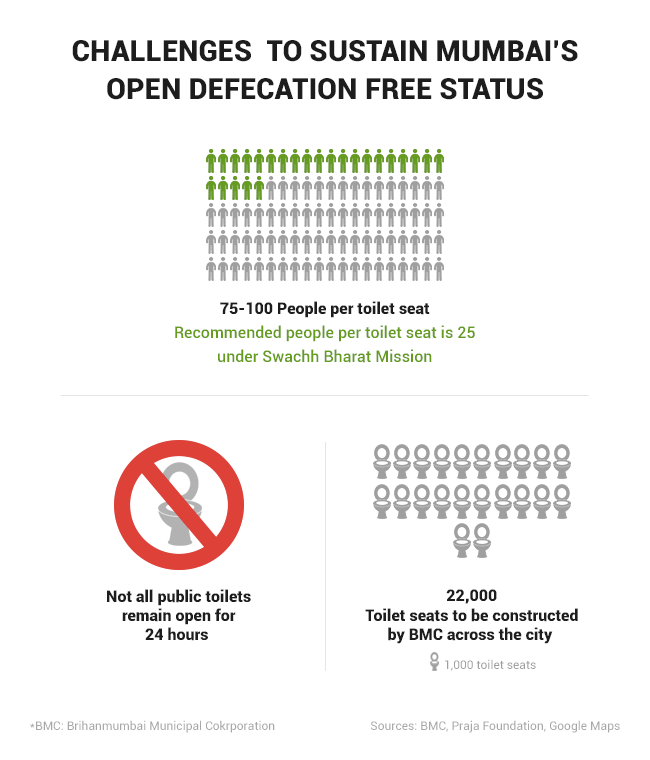 It has been a year and a half since Maharashtra Chief Minister Devendra Fadnavis had proudly declared India’s second most populous city open defecation free (ODF). 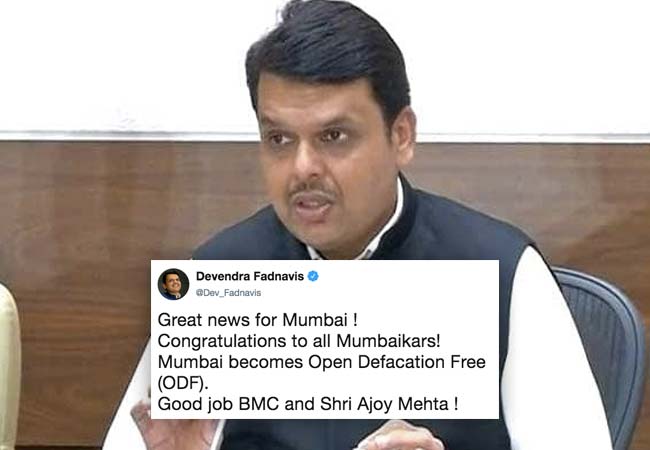 Within days of the declaration, Mumbaikars from all walks of life started expressing doubts about the ODF status and even posted pictures on social media networking sites to counter the claim. 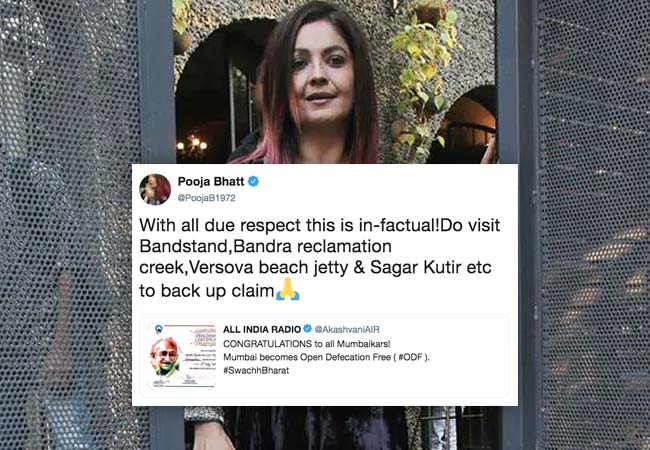 Sir it's premature to declare Mumbai ODF.Pls ask your team to visit Central Mumbai. U will see many people there!! 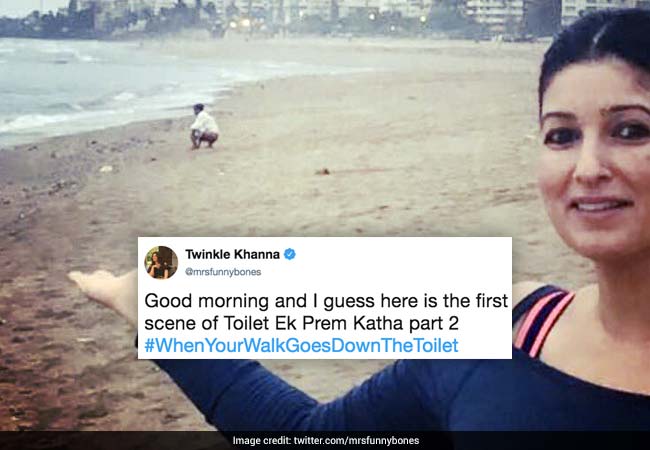 However, as per the BMC’s claim it had fulfilled the following norms mentioned under the Swachh Bharat Mission-Urban (SBM-U) to declare the city ODF:

The Quality Council of India had officially validated the claim and granted an ODF certificate to Mumbai (an area of 437.7 sq km with over 12 million people) on July 6, 2017.

According to the BMC reports, 110 toilet blocks have been constructed respectively since the inception of Swachh Bharat Abhiyan in 2014. As per the SBM-U guidelines, one toilet seat should not be used by more than 25 people ideally, but in Mumbai the current ratio is anything between 75 to 100 people per seat. It is this gap that is proving to be a challenge for the city to live up to its ODF status.

Before understanding the situation, it is important to establish the authorities involved in constructing toilets. Public and community toilets have been built by the BMC, Maharashtra Housing & Area Development Authority (MHADA) and through MLA funds. When it comes to maintaining the toilets, public toilets are either maintained by private agencies like the Sulabh International or the authority which has constructed the toilet. As for the community toilets, which are constructed for slum dwellers in the city, they are maintained by Community Based Organisations (CBO). CBOs is a team consisting of slum dwellers who are paid monthly (by the residents who use the toilet) for daily maintenance of the toilets.

When these public or community toilets are not maintained properly, people go back to open defecation. Lack of cleanliness in toilets of Badhranagar slum in Kandivali West forces men to defecate on railway tracks which are only a few metres away. “There is not much to say about the toilets. It is simple. Railway tracks are cleaner than the toilets provided to us,” said a resident on the condition of anonymity.

Challenge 2: Too Many Users Per Toilet

Coming back to Shanti’s case, overuse of toilet is a serious problem. She has to wait every day for at least twenty minutes as the number of people using the same toilet is very high. However, like her, four lakh people living in 12 clusters of Shivaji Nagar slum in Govandi have to wait for their turn. As per a sanitation survey done by city-based Apnalaya NGO, the ratio of people using one toilet seat is 145 in Shivaji Nagar.

The attendants have to open the toilets sharp at 6 every day to avoid commotions and fights among people for using the toilet. It is not possible for everyone to wait for their turn and thus open defecation in the area is rampant. There have been serious health implications of diarrhoea in the community because of open defecation, says Chandrika Rao, from Apnalaya NGO.

Behavior change is another major issue that comes in the way of ending open defecation in Mumbai. People who were habituated to open defecation before a toilet access was given to them, find it difficult and in some cases odd to use a toilet. Take for example the case of Ramcharan and other open defecation instances near Worli Sea Face.

When NDTV spoke to a family with toilet access residing in a nearby slum, it found that the oldest family member didn’t like using a toilet.

We have started using a toilet now but my grandfather still prefers open air and the rocks of sea face out of habit, says 28-year-old Santosh who lives with his family of five in the slum area.

Challenge 4: Resistance To Pay To Use Toilets

To use the pay-and-use toilets, a Mumbaikar has to shell out anything between Rs 3-5. Even if one uses a toilet once in a day, an urban poor has to spend nearly Rs 150 per month just to avail the most basic necessity. This has been another reason for open defecation.

20 per cent of the people (nearly 11 lakhs) living in Mumbai’s slums reside in ‘illegal slums’ or slums that were constructed after 2000 as per the Slum Rehabilitation Authority (SRA) guidelines. “People living in illegal slums have no access to any civic amenity including municipal water or sanitation. They have no other alternative but to either defecate in the open or access the free-to-use MHADA toilets, which, by their very design are flimsy load-bearing structures with rudimentary septic tanks that are never de-sludged, with no water or electricity,” states a 2018 report by Observer Research Foundation.

What The BMC Is Doing To Curb Open Defecation

To reduce the number of people using one toilet, and discourage people from defecating in the open, the BMC is going to build 22,000 toilet complexes in the city. These toilet seats are being installed in what is known as ‘Vertical Toilets’ or two to three storey toilet structures. The project is divided into two phases. In the first leg, the BMC is expected to spend Rs 422 crore to construct 15,000 such seats by end of 2019. The remaining will be constructed in Phase II. Since availability of land is an issue, the old public toilets will be dismantled or repaired, and the vertical toilets will be added to them. 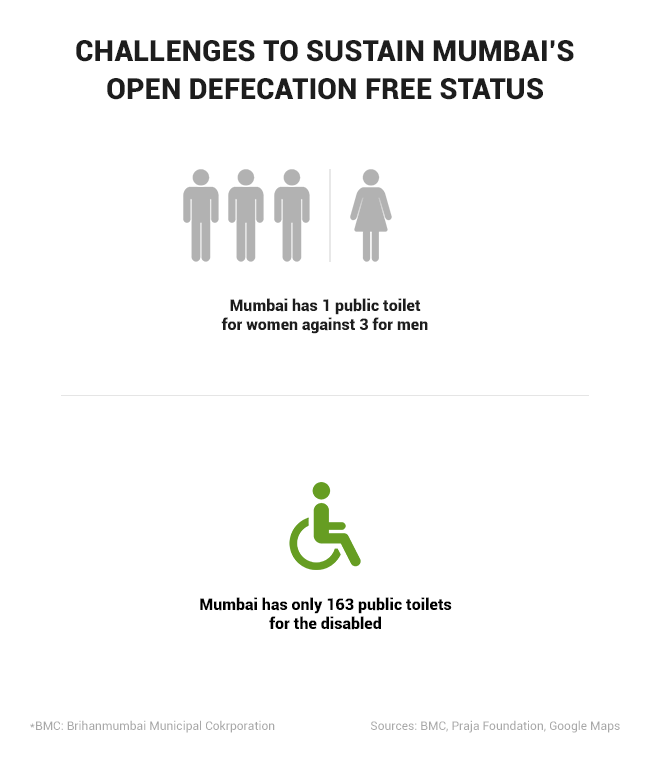 To eliminate those spots, the BMC has imposed a fine of Rs 500 in January last year and in the last three months it has collected around 82 lakh of fine that includes spitting, urinating, littering and open defecation.

In March last year, the BMC finished mapping 3,465 toilets across Mumbai on Google Maps. All kinds of toilets including pay-and-use toilets, toilets at railway stations, government offices, parks, petrol pumps, toilets maintained by NGOs and contractors have been mapped. On typing ‘Public toilet’ the maps will show a list of nearest public toilets and give details like timings, reviews and in some cases pictures as well. It will also help the user know the time that will be required to reach the spot and shortest route, with live traffic updates. 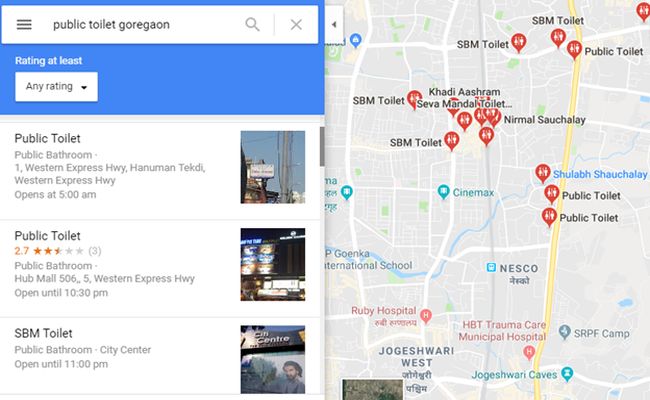 While on paper Mumbai may have met all the parameters to be called open defecation free, it needs to solve the ground realities of the public and community toilet usage.

We need to understand that Swachh Bharat Abhiyan focuses on achieving the target of toilets in numbers. The entire narrative is on toilet figures and doesn’t focus on maintenance of toilets and sustenance of ODF title. It is only when the focus shifts will the problems pertaining to using toilets reduce, says Supriya Sonar, an activist with the Right to Pee, which campaigns for sanitation facilities for women.

Ms Sonar also points out that uniform policy or guideline with respect to maintaining the toilets need to be made.

A fixed set of guidelines explaining the basic dos and don’ts of cleaning toilets must be handed over to all the CBOs and caretakers of public toilets. Basic infrastructural facility like water, electricity, door latches, sewer pipelines should be a must in every toilet to ensure that people use it, she adds.

Open Defecation Free Mumbai – A Reality Check is an on-ground report on the condition of public and community toilets across Mumbai. Through a series of five articles, it aims to establish if open defecation still persists in the city that was declared Open Defecation Free in July 2017 by Maharashtra Chief Minister Devendra Fadnavis. It also delves into the lifeline of Mumbai, local trains and analyses the cleanliness on railway tracks and platforms.

Dattatraya Sawant, a teacher by profession, drives the auto-rickshaw by himself and provides a free ride to COVID-19 patients while taking all precautions like wearing a PPE kit, sanitisation and others

Langar Sewa At The Doorstep? The Sikh Community Shows The Way As It Provides Food To COVID-19 Patients At Home

COVID-19 Spreads To Rural India, Villages Ill-Equipped To Fight It

COVID-19 Spreads To Rural India, Villages Ill-Equipped To Fight It