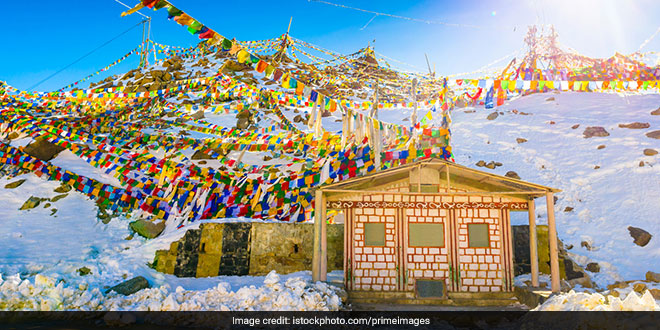 Leh: A grand carnival of Buddhist spirituality, culture and tradition beginning at the 17th century Hemis monastery of Drukpa lineage here on Monday will see the minimum use of single-use plastic with an aim to reduce carbon footprints in the Himalayas, organisers said on Sunday. Youth volunteers of Live To Love India will be discouraging the use of single-use plastic and plastic cutlery by vendors at the five-day annual Naropa Festival, an organiser told IANS.

This is in alignment with Prime Minister Narendra Modi’s action plan to stop usage of single use plastic by October 2. The organiser said there was a provision of segregation of waste as wet and recyclable.

Reusable utensils and water bottles (glass bottles) will be used for all VIPs and participants and a green team will ensure no plastic wastage at the festival venue.

Naropa festival, a celebration of the 1003rd birth anniversary of the great Indian saint Naropa, will see tens of thousands of devotees, mainly from Ladakh, Bhutan and Nepal, during the celebrations.

Union Minister of State for Finance and Corporate Affairs Anurag Thakur will be hoisting the national flag at the festival and commence the celebration of the Union Territory status for Ladakh.

The festival also attracts people from across the globe, including celebrities.

Italian Ambassador to India Lorenzo Angeloni and High Commissioner (Designate) of Republic of Nigeria, Chris Sunday Eze, will be attending, among others.

The organiser said special focus would on spreading awareness of the eco-cultural initiatives in the Ladakhi region through a panel discussion with emerging entrepreneurs.

A talk on plastic and plastic pollution by Douglas Woodring will be organized for leaders and key stakeholders of Ladakh and the Himalayan region.
Mr. Woodring is a world-renowned environmental activist and the founder and Managing Director of Ocean Recovery Alliance, which brings innovative solutions, technology, collaborations and policy together to impact positive improvements for the health of the ocean.

In 2018, Woodring’s efforts towards the environmental movement were appreciated with the Prince’s Award for Innovative Philanthropy, awarded to him by Prince Albert II of Monaco.

He is recognized internationally as the UN Climate Hero and a Google Earth Hero for his global interventions to solve the hard challenge of plastic and plastic pollution.

The talk will engage leaders and key stakeholders of Ladakh and the Himalayan region to discuss critical issues relating to water, recycling and waste management, with a primary focus on plastic and plastic pollution. It also aims to provide practical takeaways that can be implemented locally.

A traditional archery competition, fashion show and performances by local and Bollywood artistes will also take place during the Naropa Festival.
Former Prime Minister Indira Gandhi had attended the first Naropa festival in June 1980. At that time, 50,000 devotees had attended the festival.

Plastics: A 2.5 Km Long Road From Plastic Waste Under Construction In Noida To Tackle Plastic Pollution