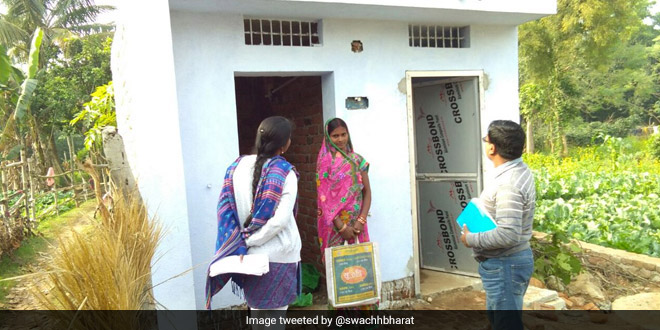 New Delhi: Launched five years ago, the Swachh Bharat Mission (SBM) announced by Prime Minister Narendra Modi is on the verge making India a completely open defecation free (ODF), enabling people to embrace change and live their lives with dignity. Over 10 crore toilets have been built in the country since the launch of the programme on October 2, 2014. A huge section of the population does not have to wait for the designated time of the day to relieve themselves any more. They are free to relieve themselves anytime — once a luxury.

The progress that India made by building toilets and the impact that it has had on the lives of millions in the country and others in the wider world has not gone unnoticed. Recognition has flowed in from global institutions like the Unicef, World Health Organization (WHO) and the Bill and Melinda Gates Foundation.

When Prime Minister Modi visits the US later in September, the Bill and Melinda Gates Foundation will honour the success of Swachh Bharat Mission that has transformed lives of millions across the country.

PM Modi was being recognised for “the progress India is making in improving sanitation, as part of its drive toward achievement of the UN sustainable development goals”, according to the Gates Foundation, which pointed out that globally, sanitation-related diseases kill nearly 500,000 children under the age of five every year.

“Before the Swachh Bharat Mission, over 500 million people in India did not have access to safe sanitation, and now, the majority do. There is still a long way to go, but the impacts of access to sanitation in India are already being realised,” The Guardian, quoted the Foundation as saying in a statement. The statement added,

The Swachh Bharat Mission can serve as a model for other countries around the world that urgently need to improve access to sanitation for the world’s poorest.

Be it Sabita Biswas from Assam’s Morigaon district, Babli of Khanna village in Punjab or the women of Nagwa in Uttar Pradesh, all recognise that the toilets built by the government under the Swachh Bharat scheme has improved their quality of lives.

As Biswas narrated her story, before the toilets were made relieving herself was a harrowing everyday task which became far more difficult during the monsoons and floods.

It’s a similar story in Nagwa, Uttar Pradesh. The toilet was built after 28 years as per an old lady. She added that women used to get up as early as 3 a.m. and look everywhere to find a private place to relieve themselves. She said,

We had real trouble if men folk were up… In the afternoons it would be difficult. So one could go only after dark, making them vulnerable to other dangers. But with the construction of a toilet, there is a reason to rejoice.

A woman from Sikkim said,

There were no toilets before. People used to defecate openly with flies and mosquitoes infesting the place. But now with a toilet in place, it is a lot more comfortable. Almost every household has a toilet and has created a world of a difference.