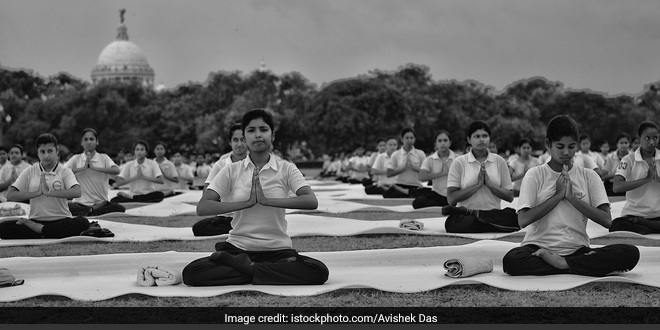 Focusing on Yoga for Humanity, special programmes have been designed this year for specially-abled people, transgender-population, women and children on International Yoga Day

New Delhi: Ahead of the International Yoga Day celebrations, Prime Minister Narendra Modi on Tuesday (June 14), said that Yoga is a perfect blend of gyaan (knowledge), karm (action) and bhakti (devotion). He also said that in a fast-paced world, Yoga offers a much-needed calm. In his tweet PM Modi stated, “Yoga is a perfect blend of Gyaan, Karm and Bhakti. In a fast-paced world, it offers much-needed calm.”

Yoga is a perfect blend of Gyaan, Karm and Bhakti. In a fast paced world, it offers much needed calm. https://t.co/UESTuNQl1u

The theme of last year’s International Day of Yoga (IDY) organised during the COVID-19 pandemic was “Yoga for wellness”.

Prime Minister Narendra Modi announced the theme in his recent ‘Maan Ki Baat’ address. The theme for this year’s International Day of Yoga (IDY) has been selected after much deliberation/consultation and it appropriately portrays, how during the peak of the COVID-19 pandemic, yoga served the humanity in alleviating the suffering and in the emerging post-COVID geo-political scenario too, it will bring people together through compassion, kindness, foster a sense of unity and build resilience among people world over.

See Pics: PM Modi Urges Everyone To Make Yoga A Part Of Daily Routine Since It Has Garnered Tremendous Popularity Globally

Union Minister for AYUSH, Ports, Shipping and Waterways, Sarbananda Sonowal in May said that our Prime Minister has suitably announced this year’s International Day of Yoga (IDY) theme as “Yoga for Humanity”.

As we are aware Yoga is a practice that brings joy, health, and peace from within, and it deepens a sense of continuous connection between an individual’s inner consciousness and the external world. IDY 2022 will be successful in propagating this theme appropriately.

Focusing on Yoga for Humanity, special programmes have been designed this year for specially-abled people, transgender-population, women and children. Human values that are an integral part of Yoga education in schools are also in focus.

This year our villages/Gram Panchayats will also see huge participation as the Common Service Centres (CSCs) are promoting the practice and training of Common Yoga Protocol (CYP) and it is expected millions of villagers will participate in the IDY 2022.

The 8th edition of International Day of Yoga will see many firsts, one of them is an innovative programme named “Guardian Ring”, which will showcase the movement of the sun, participation of people performing Yoga will take place along with the movement of the sun from different countries, beginning from the east and marching towards west. It will be a wonderful Relay Yoga Streaming programme telecasted live on DD channels.

As the nation is also celebrating “Azadi Ka Amrit Mahotsav”, 75 national-level iconic sites will also be showcasing the mass CYP demonstration on June 21st while respective states will also organise similar programmes at 75 important locations as per their selection.