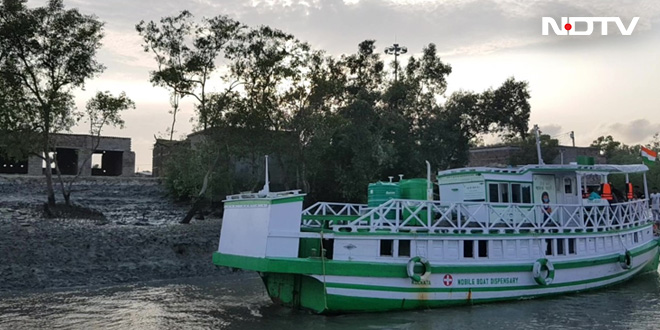 In Sundarbans, boat clinics are an essential and, in many cases, the only health care service

New Delhi: It’s 10 in the morning, a diesel-operated boat, painted in white and green colour, parks itself on the banks of the Datta river near Lahiripur village located in Gosaba in Canning sub-division of South 24 Parganas district. A rider comes out to the front and uses a narrow wooden plank to create a makeshift bridge between the boat and the stairs leading up to the village. As the boat prepares itself for its daily operations, a bunch of people, from children to elderlies, walk to the boat which actually serves as a clinic, crossing over the wooden plank. Clad in a brown coloured saree, 18-year-old Kakoli Gaye, a four-month pregnant woman has come along with her husband to get a couple of blood tests done. She says,

The doctor asked me to undergo a few blood tests and an ultrasound. Looking at my condition, some people suggested that I should get the blood tests done from a nearby clinic, as they provide good facilities to the patients and it is trustworthy.

When Sarita Gyne developed skin disease resulting in inflammation of arms and legs, she came to the same boat clinic for medical advice. She has been coming here for quite some time for her treatment. She says,

Even a mosquito bite leads to spots all over my body. I don’t have anyone in the family to take me to the government or private clinics in the city which is why I come to this boat to seek treatment. The doctors here are good.

For people like Kakoli and Sarita the boat provides free mobile health care in the remote and inaccessible islands of Sundarbans in West Bengal. The boat has been serving as Mobile Boat Dispensary Service since 1997 under the aegis of SHIS (Southern Health Improvement Samity) Foundation.

The story of the SHIS Foundation dates back to September 1978, when West Bengal was hit by weeks of torrential rain and Kolkata and Howrah suffered one of their worst floods in decades. During that time, a young man named Mohammed Abdul Wohab, working as secretary to a village-level governing body, stepped up to rescue people affected by the flood. Recalling that time, he says,

I remember seeing a foreigner swimming and pushing the boat, reaching to people with food. I wondered, ‘Who is that person?’ Back then Tuberculosis was one of the major health challenges and I had lost many of my friends to it. I approached the foreigner, Grandjean Gaston from Switzerland who was trained as a nurse and serving the poorest of the poor in India. He said, ‘If you want to help people, go to your home and start from there.’

Gaston’s response motivated Mr Wohab to go back to his hometown Bhangar where he along with his friend Sabitri Pal vowed to start a social service for the downtrodden of their neighbourhood. Together they started from a small room offered by a tea stall owner and offered free medicines to TB patients. Soon they were joined by M.S. Alam, who later became the first full-time doctor at SHIS. The number of patients swelled and so did the donations. Interestingly, some donations came in the form of bricks which were used to create a bigger space for the SHIS Foundation.

Through word-of-mouth, people got to know that there is a doctor who is giving us medicines. Initially, I and Sabitri used to travel to Kolkata to collect sample medicines from doctors and distribute to people suffering from TB, cough and cold. At that time there were no good roads so it used to take us half a day to reach Kolkata. Gradually, the number of patients increased from 200 to 300 to 400. People had no other source to get examined and procure medicines, said Mr Wohab.

At the same time, French writer, Dominique Lapierre, was documenting the life of Mr Gaston in Kolkata which gave birth to his novel “City of Joy”. On the suggestion of Mr Gaston, Dominique Lapierre decided to donate the profits of his book to the SHIS Foundation. He donated four fully-equipped boats along with two speed boats as mobile emergency ambulances. The boats have been designed to provide both medical and diagnostic services. And that’s how in 1997, boat clinics began their operations and became an essential and, in many cases, the only health care service.

Well equipped with an x-ray machine, a narrow wooden plank, a small pathological lab, qualified doctors, nurses, and trained workers four boats render their service six days a week. At all times, you will find a doctor, a nurse, an x-ray technician, a lab technician, a pharmacist and five other crew members including a boatman and an incharge. Together, they travel through the week to different islands and each boat covers a village a day and sees 100 patients. Majorly 30 islands need service by boats, said Mr Wohab. 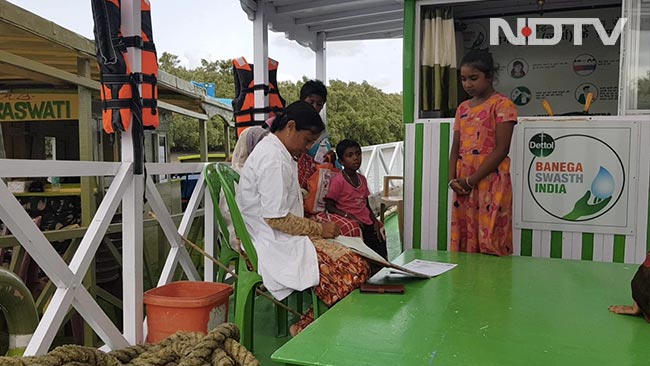 West Bengal, Sundarbans: A young girl registers herself at a Mobile Boat Dispensary for check-up

The boat clinic is provisioned to provide primary treatment, minor surgeries and tests. Since it’s difficult to get elderlies on boats, often doctors try and set-up a camp in a school building or some classroom.

Anima Sarkar a nurse on board at a boat clinic in Lahiripur said that people with different diseases – ranging from hypertension, diabetes, and skin diseases to chronic illness – seek treatment.

Dr Wohab informs that the monthly budget of one boat clinic is Rs. 4-5 lakh. Initially, the funding used to come from Dominique Lapierre but after his death, foreign funding has stopped and currently, the clinics are running with the government’s support.

15 years ago, the government released a tender to work in Sundarbans and we were fortunate to receive that tender but, soon, it will end and we might be compelled to shut operations. We are looking to collaborate with people and organisations to continue the noble work. For istance, Dettol supported us with masks, soap, hand sanitizer, beds, an oxygen cylinder and a solar system. At this stage, large scale support is required, said Mr Wohab.

The Banega Swasth India team visited the boat clinic in Lahiripur and found all sorts of patients in queue. From a young boy who came to get an x-ray done after he fell from a tree to a pregnant woman, all were there to access their right to health which is still not a fundamental right in India. And for the people of Sundarbans, who continue to face an onslaught of cyclones, seeking healthcare is usually at the bottom of the list and a far-fetched dream, a gap that initiatives like boat clinic aim to bridge.

Also Read: A Pastor-Turned-Reformer Is Promoting Healthcare Through A Self-Sustainable Model In Tribal Villages Of Nagaland