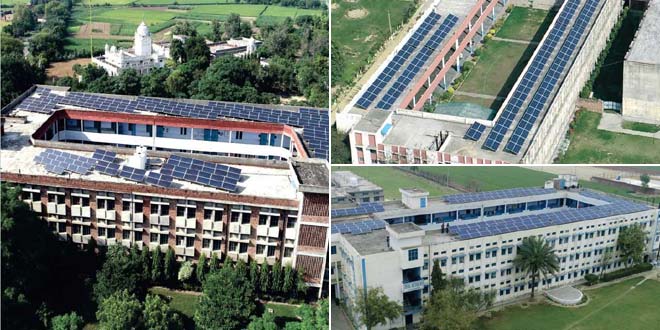 New Delhi: In an effort to reduce carbon emissions by increasing the use of renewable energy, 13 schools and a private university in Bathinda district of Punjab have installed rooftop solar panels for meeting their electricity requirements. Through this step, the schools are aiming to achieve the twin goals of lowering power expenses and set a strong example of sustainable living for the students.

Inaugurated on Tuesday (April 2), the solar project with a capacity of 1.2 megawatts of energy has been commissioned by Akal Academy, a rural education chain of 129 schools and three universities in rural areas of various districts of Punjab, Uttar Pradesh, Haryana, and Rajasthan.

The solar energy project which we have started in our university and in schools in Bhatinda is the largest grid based educational solar power project in rural areas of Punjab. It is a moment of pride for us because through this initiative we can instill the feeling of environment conservation among students. Being part of an institution which uses solar power for meeting its electricity needs will motivate them to make efforts to reduce their carbon footprints in general.

Dr. Singh further informed that the project was built with financial assistance from the Ministry of New and Renewable Energy (MNRE) and out of the total manufacturing and installing cost of Rs. 5.2 crore, about Rs. 1.7 crore was provided by the ministry.

Explaining about the project JP Singh, a consultant for solar energy projects and volunteer with Akal Academy said,

A total of 3750 panels have been set up under the project in 1.2 lakh square feet area.

How Will The Solar Power Project Of Akal Academy Bring A Change?

The solar power project started by Akal Academy is expected to reduce 1,200 metric tonnes of carbon dioxide emission annually and about 35,000 metric tonnes over the next 25 years, as per J P Singh. He also said that this much reduction in carbon emissions is equivalent to the planting of 82,000 trees.

The solar project is expected to meet 80 per cent power demand of the 14 academic institutions which will result in an annual savings of more than Rs. 1 crore in the power bill. The generated power will be consumed to not only light up the classrooms and corridors but will also be used for cooking as well as heating water.

Also Read: In A Bid To Check Air Pollution, Punjab Brick Kilns Will Be Shifting To Cleaner Technology

According to JP Singh, the excess power generated under the project will be sent back to the grid of the local DISCOM (electricity distribution Company) through net metering which is a billing mechanism that pays the solar energy system owner for the electricity added to the grid. The excess electricity can be withdrawn when the sun is not shining.

Talking about the Academy’s future plans related to renewable energy, JP Singh asserted that they aim to install solar panels in all of 129 schools and three universities to further its efforts towards building a sustainable environment.

The solar power project was inaugurated by Jatindra Nath Swain, Managing Director Solar Energy Corporation of India who acknowledged Akal Academy’s efforts towards using green energy and said that the project will be contributing in the government’s vision of increasing the use renewable energy and reducing the dependence on fossil fuels. The Indian government has set a target of producing 175 gigawatts of renewable energy by 2022 and according to MNRE, as of January 2019, the country could produce 74.08 gigawatts. This amounts to about 42 per cent of the target power to be generated.