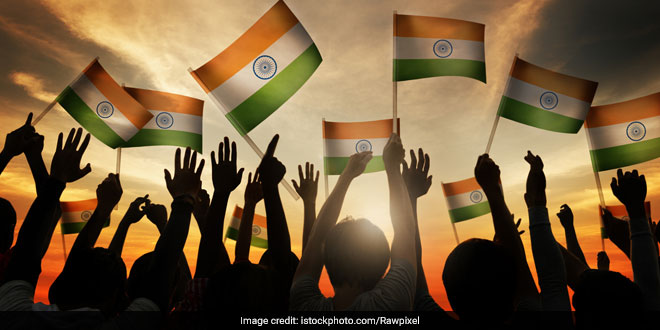 Mumbai: This Republic Day show your patriotism by opting for eco-friendly flags. Every year around this time thousands of tri-coloured flags  get sold across India and most of the flags are made of plastic. Ever wondered what happens to those flags once the celebrations are over? They either end up in landfills or get burnt causing pollution. To ensure that the celebrations don’t harm the environment, Chinu Kwatra from Mumbai has a solution. He has come up with flags that grow into plants. Chinu, who has led beach cleanup drives in Mumbai, has collaborated with Boxwood, a company that manufacturers eco-friendly products like cutlery, stationery, and so on.

Also Read: Soon Agra Will Have A Replica Of Taj Mahal, Only This Time It Will Be Made With Plastic, Polythene Waste

The idea of promoting plastic-free flags came to Chinu during his cleanup drives when he witnessed the massive amount of plastics that makes its way into oceans.

Every year, our foundation, Khushiyaan runs a campaign called ‘Save The Flag’. We visit public places around Mumbai a day after Republic and Independence Day and collect all the flags dumped on the roads. Most of those flags are made from plastic that take years to decompose. I saw how plastic was affecting our oceans during the cleanliness drives. Boxwood was one of the volunteers at the drives and after telling them about the idea plantable seed flags they agreed and started manufacturing them, Chinu tells NDTV.

The plantable seed flags, that cost around Rs 20, are made from paper and seeds of various plants including basil, tulsi, tomato among others are put inside the flags. The dimensions of each flag is 3×2 square inches.

All one has to do is take the flag and put it in an empty plant pot. With proper watering and care, the flag will grow into a plant within seven to eight days.

It was only a few days ago when the flags were ready and hence only 3,000 flags have been manufactured. But to everyone’s surprise, half of them were sold within a period of three days.

Social media is our only marketing strategy and we have received an overwhelming response from individuals and corporate houses. There have been demands from other cities like Chennai and Gurugram (Gurgaon) also. But with limited days and resources were unable to send it. For the upcoming Independence Day, we will make the flags in advance, says Chinu.

While Chinu is on a mission to gift more trees to the city, the Sathya Sai Orphanage Trust in Thiruvananthapuram, Kerala will sell similar plantable seed flags to people. The project is in collaboration with Seed Paper India company and the State Forest Department.

The company has manufactured close to 1,000 such flags, each costing Rs 12. The flags are made from handmade biodegradable paper and have been embedded with different seeds like sunflower, marigold, tomato, etc.

The colours used in the flag are also from natural ingredients. While Spinach is used for the green colour, turmeric powder and blueberries are used for saffron and blue for the Ashok Chakra respectively.