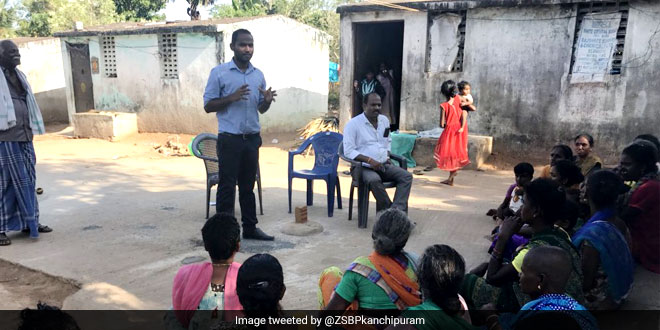 New Delhi: The sustainability of open defecation free (ODF) district is not guaranteed by just ODF declaration, as without continues monitoring and adequate behavioural change, people can inadvertently revert back to their usual habit of defecating in the open. Understanding that Swachh Bharat Abhiyan is not just about constructing toilets, but rather about ensuring regular usage of toilets, the officials of Tamil Nadu’s Kanchipuram district, which was declared ODF in February 2018, has taken up a number of initiatives. To sustain the practice of healthy sanitation and to keep the Swachh Bharat mission up and running in the district, the district officials issued sanitation cards to monitor the regular use of toilets in rural areas, and even formed ODF Sustainability or Swachh Committees at district, block and panchayat levels with defined roles to ensure that people keep using toilets.

Tamil Nadu’s Kanchipuram district, famous for ancient temple architecture and silk sarees, had low sanitation coverage of 55.96 percent in 2014, the year when Swachh Bharat Abhiyan was launched. Over the years, the district officials constructed over 1,81,166 toilets to make the district open defecation free on February 27, 2018, and are now working to ensure its sustainability through the formation of Swachh Committees and Sanitation Cards.

How Sanitation Cards will help Kanchipuram towards ODF sustainability 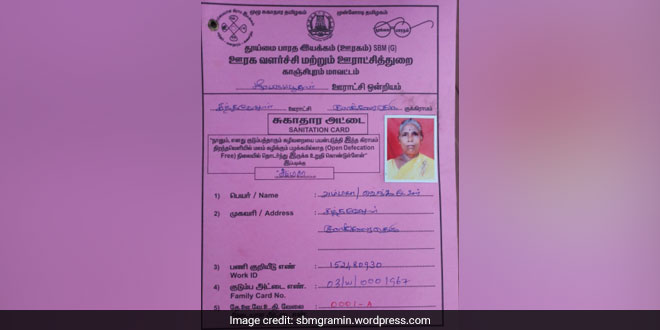 When the swachh officials visit a home, every two weeks, the officer will check if the toilet is being used. If a toilet is found functional and clean during the inspection, they will mark YES and NO if not in use.

Beneficiaries who constructed toilets on their own are not issued these cards; although plans are in the pipeline to issue such cards to all people in the district having toilets in future.

Through the sanitation card, we will keep a check if the beneficiaries are using the toilets regularly or not… if they are using it, we will acknowledge their participation towards making India a clean country, and if they are not using it then will motivate them to start using the toilets. And to ensure the sustainability of open defecation free (ODF) status, the district administration is also thinking of imposing fines on those who violate ODF rules, said Sankar N, Zila Swachh Bharat Prerak, Kanchipuram.

How Swachh Committees at district, block and village level would work in sync to ensure Kanchipuram’s ODF sustainability

Village Level: The Swachh Committee at village level comprises representatives from the departments of social welfare, health, education, women and rural development; headed by a panchayat secretary or a school headmaster.

The swachh motivators will identify defects in previously constructed toilets and resolve the defects to ensure regular toilet usage. In this regard, they would undertake door to door visits to verify regular usage of toilets, while motivating people to keep using the toilet facility.

In schools, the headmasters and teachers during morning assembly would ask students if they have used toilets at home and washed their hands post defecation. Apart from interacting with students, they will also speak to their parents, informing them about how the practice of open defecation would negatively affect physical, mental and cognitive development of students. Every week, the school faculty will also conduct a special class on personal hygiene and safe sanitation practices such as using toilets, washing hands regularly and keeping the toilets clean. In addition to this, the school will also set up a sanitation corner where sanitation related messages will be printed and sanitation equipment will be stored.

Furthermore, the teachers will also form sanitation clubs, involving students who are active and passionate about sanitation. Members of these clubs will create awareness on toilets usage through swachh rallies, public meetings and door to door visits, once a week. They will also use local resources to print and set up sanitation messages at various points within the school.

To educate people about the health hazards of open defecation, the village health nurses visit homes regularly and discuss the link between open defecation and diseases such as diarrhea, cholera and stunted growth of children. They also organise a health campaign to create awareness about toilet usage twice a week, and also conduct a survey on health indicators. As part of this exercise, the nurses will monitor and ensure that field level ODF sustainability activities are being carried out as per the guidelines, and submit a report about the same to block level officers.

Also, the doctors practicing in the villages have to ensure that Out Patient Department (OPD) slip should have sanitation message on its back. And during interaction with patients, they should also advocate toilet usage and inform them about the ill effects of open defecation.

Block Level: The Swachh Committee will have representatives from the departments of health, education, and rural development.

BDO of uthiramerur block conducted orientation on New format made for pilot study to identify the status of outside baseline survey HHs. He involved motivators and Panchayat secretaries for the survey #ZSBP #SwachhBharat @paramiyer_ pic.twitter.com/v8TImzvqqj

The Block Development Officer (BDO) will conduct review meetings regarding the ODF sustainability activities being carried out at village level. And if he faces any challenges with regard to executing the sanitation awareness activities at village level as reported by the field staffs, he should then take necessary action to resolve those difficulties. And the officer is also expected to prepare a monthly report on the sanitation status in the block and submit it to the district level committee.

While the Block Medical Officers and Block Health Supervisors will also conduct ODF sustainability meetings, once a month, wherein they will interact with the village health workers, nurses and doctors to understand the shortcomings and the plan forward.

District Level: the Swachh Committee will comprise members from various departments as in the block and village level committees, in addition to officials from the district administration.

It is disheartening to see that some people accept to go back to the unhygienic and filthy habit of open defecation, despite having a toilet a home and the area where he/she lives in has been declared open defecation free. This refusal to live in an unhealthy environment becomes the cornerstone of behaviour change and the basis for sustained ODF status. We are committed towards ODF sustainability of Kanchipuram, and want that this should be achieved through community participation, said one of the district officials.