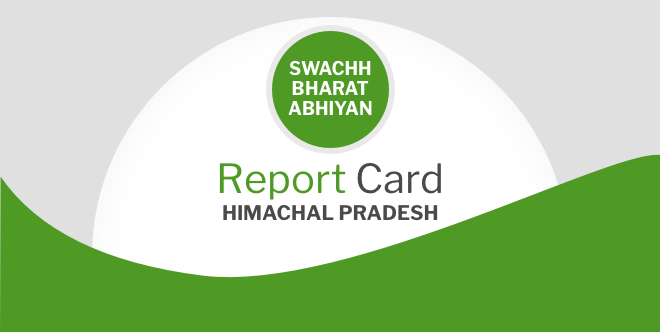 New Delhi: In the year 2015, when Mandi district of Himachal Pradesh was declared free from the practice of open defecation and ranked as cleanest district in the ‘Hills’ category as per Swachh Survekshan 2016, women of the district were having the last laugh. Mahila Mandals of the district were minting money from selling scrap items. It all started with women learning about health benefits of cleanliness at a public awareness program held in the district and then motivating villagers to construct toilets at home. Parallely Mahila Mandals undertook the task of cleaning their villages every week. From February 2015 to August 2016, over one lakh kg of scrap worth Rs. 5 lakh was sold.

Amidst this, the Mahila Mandals initiated Daru-Bandi Abhiyan (liquor ban campaign) in the Sawamahu Gram Panchayat as empty liquor bottles used to be a major source of garbage in the district. Such series of swachh initiatives in one district soon spread in different parts of the state and helped rural Himachal Pradesh (which is 90 per cent of the state) to become open defecation free (ODF) and only the second state in the country after Sikkim, to get the ODF tag.

In the year 2000, as part of the Central Rural Sanitation Program, the ‘Dev Bhumi’ (Abode of Gods), Himachal Pradesh government started building toilets. So by 2014, when Swachh Bharat Abhiyan – a nationwide cleanliness campaign, was launched, Himachal already had 88.04 per cent of sanitation coverage. As per the data available on government portal – Swachh Bharat Gramin Dashboard, with the construction of over 1.7 lakh (1,72,551) household toilets, all the 12 districts, 77 blocks, 3,231 Gram Panchayats and 15,291 villages in the state of Himachal Pradesh were declared ODF.

The state of Himachal Pradesh which has almost 90 per cent (89.97%) of its population residing in rural areas – declared itself open defecation free in 2016. The reason behind an early achievement is the early adoption of the Community Led Total Sanitation (CLTS) programme, usage of IEC (Information, Education and Communication) activities and introduction of reward programmes, like the Maharishi Valmiki Sampoorn Swachata Puruskar (MVSSP). Under this programme, the government would give away awards to the cleanest Gram Panchayat at Block, District, Division and State level.

Today, rural areas of the state are working for ODF Plus and ODF Plus Plus status. While the focus of ODF Plus is on sustaining toilet usage by ensuring these are functional, clean and well maintained. ODF Plus Plus focuses on achieving sanitation sustainability that is liquid waste/fecal sludge and septage management (FSSM). Sharing details of the same, Gian Sagar Negi, Deputy Secretary-cum-Joint Director, Rural Development, Himachal Pradesh, says,

Very soon we are going to conduct a survey under which we will be checking toilets that is what kind of toilets have been built, septic tanks to know about their functioning and how safe they are. Also, we have identified some houses that don’t have proper toilets; their toilets are being constructed under government’s MGNREGA scheme.

For liquid waste management, soak pits and underground channels are being constructed. Grey water which includes water from kitchen, shower water from bathroom will be directed to the soak pits. As far as solid waste management is concerned, the state government is adopting a cluster approach. Explaining the approach, Mr Negi says,

We have identified different clusters of 10-12 gram panchayats and each cluster will have waste collection at source, effective management and disposal of waste. While plastic waste will be collected and sent to industries for recycling, organic waste will be converted into compost.

Currently, Ima Panchayat in Palampur, Himachal, follows waste segregation at source and has waste to compost plant. Other gram panchayats are being asked to take lessons from Ima and replicate the same model. The state government has already conducted training and sensitisation of panchayati raj institution members.

Till now, both wet and dry wastes are collected together and there is no proper disposal of it. But like Ima Panchayat, we will be promoting waste segregation at source. For easy disposal and management of waste, segregation at source is must and individuals need to understand this, says Mr. Negi. 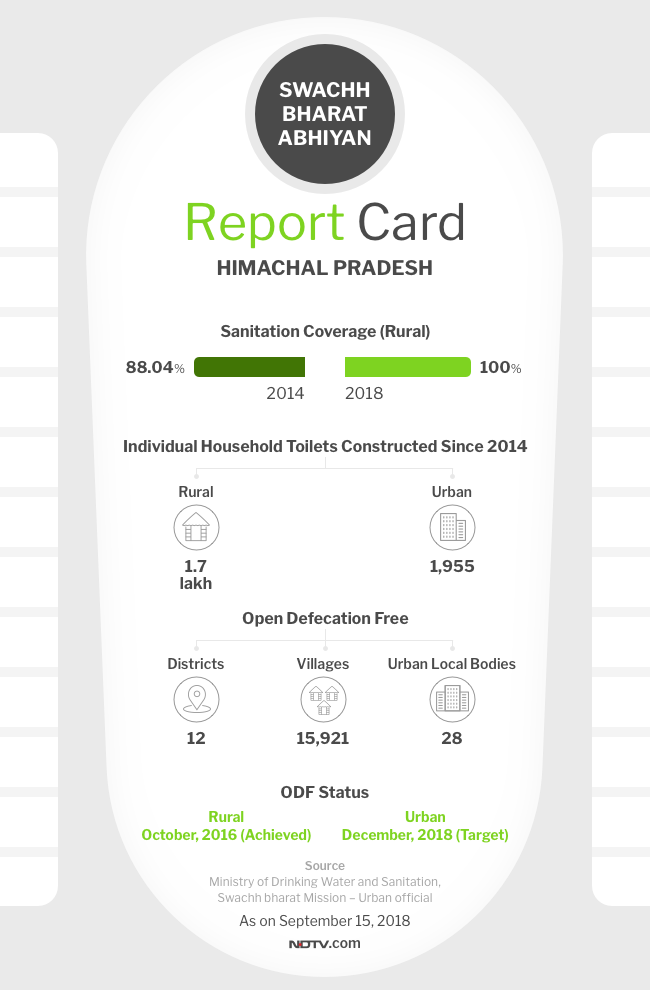 As per the data shared by one of the officials of Swachh Bharat Mission in Himachal, out of the total 54 Urban Local Bodies (ULBs) in the state, till today only 28 ULBs have achieved the ODF status. While 23 ULBs are still edging towards ODF, remaining 3 ULBs are yet to put out report on their ODF status. The urban areas of the state have a target to go ODF by this December.

Explaining the status of open defecation, an official said,

Though the urban areas are yet to achieve the ODF title, according to the defined parameters, but here, you will not find anyone defecating in the open. In urban areas, one cannot find even single open defecation spot. People are well informed and willing to build toilets. It is just we have to go through a process for allocation of funds and other things.

If resources are present, people are educated then what’s holding back the urban areas from going ODF? Shedding light on the same, the official says,

There are set parameters to declare a city ODF, apart from the one that no individual should defecate in open. We are lacking in those key points like documentation. Under documentation, we need declaration signed by schools students, councilors, women from different self-help groups under national urban livelihood missions. Say there are 3,000 students in a school and we need ODF declaration by 85 per cent of students, but we could not reach out to those many students, reason being under staff.

Apart from lack of manpower, majority of the staff lack technical know how making it a challenge to upload the data on government dashboard of Swachh bharat Mission – Urban.

On the other hand, to encourage individuals and accelerate the toilet construction and spread awareness on the benefits of hygiene and sanitation, the state government is making use of IEC (Information, Education and Communication) activities like street play, organising workshops, using radio as the medium of communicaion and others.

In a bid to tackle issues like overflow of garbage which leads to water pollution, leachate, littering and animals getting sick from eating the littered garbage, Himachal Pradesh’s winter capital Dharamshala, has installed sensor-based underground bins. In the year 2017, Dharamshala Municipal Corporation (DMC) initiated the project of placing underground bins across 140 public locations in the city and this year it became India’s first city to do so. 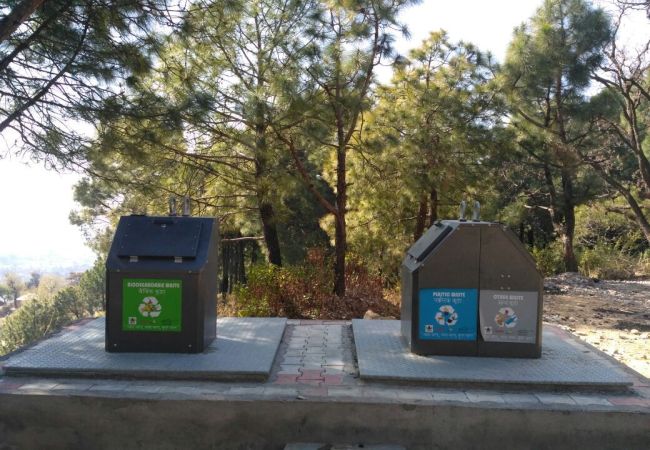 At every location, a concrete pit is created in which a bin is installed and fenced with tiles around it and a lid is placed onto the bin. Finally, a sensor is attached to the bin which sends an alert to the operator once the bin is full, who in turn will direct the civic workers to empty the bin. Crane-like vehicles are specially allocated to remove the garbage from the underground bins.

At every location three bins for three types of waste have been installed– plastic, wet and non-plastic dry waste. 100 underground bins with sensors are now open to public in Dharamshala.

Apart from dealing with the regular waste, the state is also fighting a battle against plastic bags and thermocol cutlery. On October 2, 2009, the state government had banned the use of any kind of plastic bags in the state. But despite the ban, plastic continued to used in packaging.

In 2009, when the state government declared a blanket ban on plastic, manufacturers opposed it and approached court for a stay on the ban. Back then they were granted stay and since then the case is pending in court. To ensure collected plastic waste does not end up in some landfill or pollute water bodies, the state is installing ‘waste to energy’ plants. Currently, plan is to have three plants – one in Shimla, which is functional, other two in Kullu and Baddi, which will be functional soon.

After the unsuccessful ban on plastic bags, the state government decided to ban thermocol cutlery. This year on World Environment Day, Chief Minister Jairam Thakur announced the ban on thermocol cutlery. Since plastic bags are being used, despite the ban, a fresh notification was issued in July stating that the ban would be made effective after three months of publication of the notification in the government gazette.

Ban on plastic bags has been in action from a long time. Now the government is focusing on single use thermocol cutlery. The ban will be in effect from the first week of October, tells D C Rana Director, Department of Environment, Science and Technology, while speaking to NDTV.

Though, rural Himachal Pradesh is ODF and is now focusing on liquid and solid waste management, but urban areas need serious attention as they are not ODF yet even after four years of the Swachh Bharat Abhiyan. In addition, scientific disposal of waste is yet to take off uniformly across the state. Probably, the determination and diligence of Mahila Mandals of Mandi is what the state needs to take inspiration from, for the next leap.