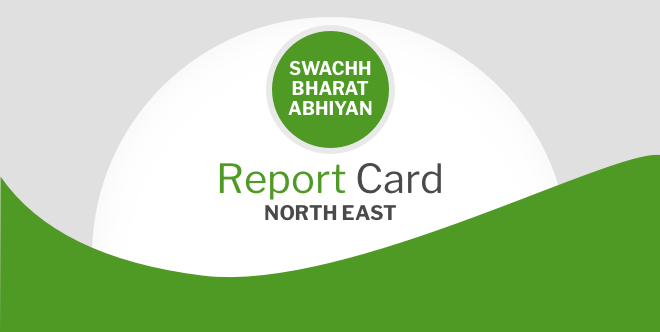 New Delhi: The Swachh Bharat Abhiyan completes its four years this October, the gradual improvement in India’s sanitation coverage and increase in the number of household toilets indicate that the mission’s goals of making India open defecation free (ODF) by 2019, is on track. If the Swachh Bharat Abhiyan is to be ranked region-wise, the pan Indian performance has been satisfactory and even states like Bihar and Uttar Pradesh which were underperformers till last year, have upped their ante this year. The eight states of Northeastern India were reeling under poor sanitation coverage of less than 50 per cent, barring Sikkim which was one of India’s first open defecation free states. The Northeastern states today collectively boast of sufficient sanitation coverage, and the rural areas of three northeastern states of Meghalaya, Mizoram and Arunachal Pradesh have been declared open defecation free (ODF).

To ensure that Northeastern states do not fall prey to financial burden due to the toilet construction exercise, the Centre in 2014 decided to bear 90 per cent of the cost of building a toilet in these states, and will provide an amount of Rs 10,800 per toilet to each beneficiary, across the Northeastern states. Across rural northeast, 38 lakh toilets have been built already, and the region is marching towards becoming ODF.

Before the Swachh Bharat Abhiyan and amidst India’s long list of sanitation missions, Sikkim had proved that people dedicated to the cause being aware towards cleanliness and hygiene can work wonders. The state had become ODF in 2003, but has not stopped making cleanliness and hygiene a priority. Despite being an ODF state, Sikkim continued to build household toilets in its rural areas, especially in newly built houses. In 2018-18, Sikkim added 4,510 new household toilets in its rural areas, taking the total number of households in the state with toilets to above 55,000. The state has also done exceptionally well in making all seven of its urban local bodies (ULBs) ODF and over 1,066 household toilets have been built in urban areas. Given its ODF status for over a decade, Sikkim is now in a transition phase as the state is moving towards becoming ODF plus.

In 53 wards across 7 ULBs, door-to-door waste collection has been achieved. Currently, the state is converting 183 metric tonnes of waste into compost annually, and plans to increase the amount to 400 metric tonnes by next year. The state government continues its motivational and awareness programmes, and has ensured that districts regularly arrange for handwash programmes and rallies in schools to pass on the message of a clean and healthy Sikkim to the next generation. Despite being ODF, Sikkim has till now received Rs 18 crore for the Swachh Bharat Abhiyan.

Assam: Next In Line To Become Open Defecation Free

With 29 lakh toilets built and sanitation coverage of 92 per cent, Assam remains the fastest mover in the northeast region. In 2014, Assam was reeling with sanitation coverage of 41 per cent, and 20 out of its 27 districts had sanitation coverage of 40 per cent or less. In four years, 12 districts and 8,600 villages in Assam have become ODF, signaling the state’s acceleration towards becoming ODF. Over 10,000 toilets have been built in urban households across Assam. The state is rushing to make the rest of its 15 districts ODF and expects to complete the construction process by March, post which verification and monitoring will be the priorities. Though over 1,400 community and public toilets have been built in Assam, the performance of the state’s urban areas remains a concern. The capital Guwahati, dropped 71 positions down to 207th in this year’s Swachh Survekshan, with major concerns regarding the city’s sanitation facilities, 80 per cent of which are unclean, as per response submitted during the survey. Floods remain a concern in rural Assam, and the state has plans to continue installation of elevated toilets in flood prone areas to meet the October 2019 ODF deadline. Till 2017, Assam has received Rs 1,700 crore under the Swachh Bharat Abhiyan.

Our biggest concerns are toilets in flood prone areas, as in their absence people have no option but to defecate in the open. Elevated toilets made of bamboo, and mobile toilets that can move from one place to another have been installed in six flood prone districts across Assam,”said Pratul Kumar Choudhury, State Coordinator, Swachh Bharat Abhiyan.

Rough terrain and difficult access did not deter Arunachal Pradesh district officials from going door-to-door in every village in the state and spreading the message of safe sanitation and its necessity. The result? Rural Arunachal Pradesh has become ODF with over 5,300 villages having access to individual household sanitation across the state’s 20 districts. This is a major improvement from last year, when only one district in Arunachal Pradesh held the ODF distinction. The state has continued with its bamboo toilet initiative, and 13 districts in the state has more than 500 or more bamboo toilets, as they are located in terrain where building of traditional two-pit toilets is difficult. On the urban front, though over 5,600 household toilets have been built, only five ULBs in the state are ODF. To accelerate building of toilets and improve Arunachal Pradesh’s overall cleanliness scenario, the state government earlier this year had launched a cleanliness campaign. The campaign focused on door-to-door garbage collection, waste segregation and continuous awareness on using household and public toilets. The state has also converted over 100 unsanitary toilets into sanitary ones. Apart from the 184 crore allotted to Arunachal Pradesh by the Centre for Swachh Bharat Abhiyan, the state has spent an additional Rs 30 crore towards Swachh Bharat Abhiyan.

Mizoram began 2014 with rural sanitation coverage of 74 per cent, but certain villages had less than 20 households with toilets. In four years, rural areas of the state have witnessed a fairytale turnaround, with over 33,000 toilets built across its 8 ODF districts. Difficult terrain and a population with majority of people being below the poverty line did not deter the state government from implementing the Swachh Bharat Abhiyan objectives. Thanks to its performance in Swachh Bharat Abhiyan, the state has also done well to prevent child stunting, as 2017 saw stunting rates come down by up to 39 per cent in the state. Mizoram’s urban sanitation problems however continue to pose problems for the state. The state has managed to construct 143 public toilets against a target of 300 and only only 1,037 household toilets, for an urban sanitation coverage of 25 per cent. Till now, the state has only received Rs 14 crore funding from Centre for the Swachh Bharat Abhiyan, and will hope to get more to improve its dire urban sanitation scenario.

Since the launch of the Swachh Bharat Abhiyan in October 2014, Meghalaya had been one of the fastest movers in improving its rural sanitation scenario. From 56.11 per cent sanitation coverage in 2014, rural Meghalaya has increased its coverage to 100 per cent, effectively becoming ODF in the process. Over 2,09,374 toilets have been built in the state, the third highest in the northeastern region. 6,028 villages in the state have become ODF across all 11 districts in the state. Not a greater performer in the urban counterpart of the Abhiyan till 2017, Meghalaya has managed to construct over 8,700 toilets in its urban households and build 296 public and community toilets to take its urban sanitation coverage to above 75 per cent. Meghalaya has received Rs 110 crore from Centre for Swachh Bharat Abhiyan till 2017.

Another feather in the northeastern region’s cap, Nagaland has also performed well in the past four years to take its rural sanitation coverage to 98 per cent, and is eyeing an ODF certificate for its rural areas by December 2018. 9 out of 12 districts in Nagaland’s rural areas have become ODF, and the remaining three are scheduled to go ODF by the end of this year. 1.25 lakh toilets have been built in Nagaland and 1,412 villages have been declared ODF. From 285 individual toilets in urban areas to 2,972 ones, Nagaland’s urban sanitation progress has also been speedy in the past one year. The only area where Nagaland is yet to show any progress is making its ULBs ODF, as none of the state’s ULBs are ODF yet. Nagaland has received Rs 95 crore from the Centre for Swachh Bharat Abhiyan, till 2017.

With over 2,30,000 toilets in its rural areas and 6,81,000 household toilets in its urban areas, Manipur has performed exemplarily to make its presence felt in the Swachh Bharat Abhiyan. The state currently enjoys sanitation coverage of 95 per cent in its rural areas. Manipur had initiated district wise campaigns for Swachh Bharat Abhiyan, and had set periodical goals to achieve its ODF target. The state is now looking to go ODF by the end of this year, and become the third northeastern state to join the elite list. 8 out of the state’s 15 districts are ODF, and barring Imphal East and West, all the non-ODF districts have sanitation coverage above 80 per cent. The state has also managed to eradicate open defecation from 27 ULBs. Manipur has received a little over Rs 80 crore from the Centre for Swachh Bharat Abhiyan, till July 2017.

Tripura Remains The Only Underperformer In The Northeastern Region

The only state with less than 80 per cent sanitation coverage, Tripura is yet to join its neighbours in becoming a success in the Swachh Bharat Abhiyan. Though over 1,92,000 toilets have been built in Tripura, no district has gone ODF, worrying state officials whether the state will be able to meet the October 2019 ODF deadline. The districts of north, south Tripura, Sepahijala and Unnakoti have sanitation coverage of less than 25 per cent, and these are districts Tripura must focus on to become ODF by October 2019. On the urban front, mere 21 per cent of the urban areas are ODF, as only two ULBs in the state have managed to eradicate open defecation. With only 517 household toilets constructed in urban areas, Tripura has the lowest rate of urban household toilet construction among northeastern states. Nearly 2 lakh more toilets are required to make Tripura ODF, and the state needs to make speedy progress to make up for lost ground. Till July 2017, Tripura received funds worth Rs 104 crore from the Centre, for Swachh Bharat Abhiyan.