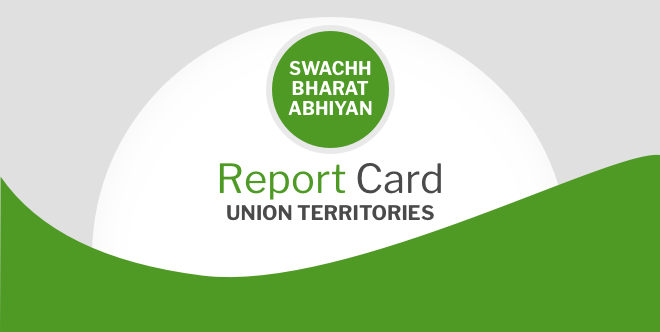 New Delhi: From a mere 38.70 per cent of sanitation coverage in rural areas in 2014 to now 92.06 per cent, Swachh Bharat Abhiyan – the nationwide cleanliness campaign, has come a long way. Individual household toilet construction in India has been on a spree since the inception of cleanliness mission and it is evident with 20 states and Union Territories (UTs) declaring themselves free from the age old practice of open defecation. Until last year, among union territories, only Chandigarh was declared open defecation free (ODF), but in past one year, a significant change has been witnessed as four out of five (excluding Lakshadweep and Delhi) union territories are now declared ODF, excluding Delhi and Lakshadweep. Here is a look at the swachh journey of all the UTs.

Chandigarh, a city and union territory that serves as the capital of the two neighbouring states of Haryana and Punjab, was the first UT to go ODF. With the construction of 6,117 individual household toilets, 2,324 community and public toilets in urban areas where 97.25 per cent of people live, the city was declared ODF back in 2016. In the same year, Swachh Survekshan 2016 results declared Chandigarh as the second cleanest city of India.
But soon, the city witnessed a dip in its sanitation quotient. Relocatable and community toilets grabbed attention for their pathetic condition. Under Swachh Survekshan 2017, which assessed 434 cities across India, the city’s swachh ranking slipped to rank 11.

But that changed rapidly as the state government undertook different awareness programmes and activities to uproot the problem of open defecation. After ODF verification, the city got reverification done by Quality Council of India (QCI). The city climbed back the swachh rankings in Swachh Survekshan 2018 and was titled as third cleanest city of India.

Amidst this, the Chandigarh municipal corporation signed ‘Yaar Anmulle’ famed Punjabi singer – Sharry Mann as their Swachh Bharat Abhiyan ambassador. Mr Mann was chosen as their mascot because of his popularity amongst youngsters in the city.

Now we are prepping for Swachh Survekshan 2019 which focusses on ODF PLUS and ODF Plus Plus, which is sustaining the ODF title and liquid and solid waste management. For effective waste management, door-to-door waste collection, waste segregation at source is being done. Additionally, composting is being practiced in different areas of the city, says Mr. Saurabh Mishra, Additional Commissioner 1, Municipal Corporation Chandigarh, while speaking to NDTV.

The Union Territory of Daman and Diu which is largely divided into two parts – Daman and Diu, attained ODF title in December 2017, before its target of March 2018. The news was confirmed by Secretary Ministry of Drinking Water and Sanitation, Parameswaran Iyer.

According to the data shared by Vaibhav Rikhari, Chief Officer, Municipal Council, Daman, a total of 675 individual household toilets, 22 community toilets, 12 public toilets were constructed in urban areas of the UT. Additionally, over 100 toilets were renovated. The reason behind early achievement is the rigorous awareness campaign, and IEC (Information, Education, and Communication) activities. Sharing details of the same, Mr. Vaibhav Rikhari says,

It was challenging for us to inculcate the behavioural change among people because for years people have been practising open defecation and it is not easy to let go an old habit in a day or two. To overcome this, we composed swachhta song which was played on garbage vehicle that would go door-to-door for waste collection. Also, regular interaction with households helped us understand their problem and at the same time educate them about sanitation.

After ODF, the UT is focusing on toilet usage and solid waste management. For solid waste management, the department has made bulk waste generators a part of the campaign and is segregating and processing over 50 per cent of the waste. Additionally, two compost machines of five tonne each has been installed in Daman. A sewage treatment plan having capacity of treating 4.21 million litres of daily is underway.

It is easy to become ODF, but difficult to sustain it for a long time and we are moving in that direction only, says Mr. Vaibhav Rikhari.

As per the data available on government portal – Swachh Bharat Mission Gramin, a block, 20 gram panchayats, and 69 villages are self-declared and third party verified ODF. Since until October2017, the rural sanitation coverage was 80.62 per cent, it didn’t take much time for the UT to declare itself ODF.

As far as urban areas of the UT are concerned, government portal Swachh Bharat Urban states that 675 individual household toilets and 397 community and public toilets have been constructed till today. The urban areas of Dadra and Nagar Haveli were declared ODF in November 2017. Currently, the urban areas are not focusing on waste management.

Till June 2016, zero toilets were constructed in rural areas of Andaman and Nicobar Islands. Though the sanitation coverage in Nicobars was 92.07 per cent in 2014, but north and middle Andaman and south Andamans had only 33.54 per cent and 59.24 per cent of sanitation coverage respectively. It is in June 2016, the rural areas got the swachh campaign off the ground and attained ODF status before the October 2019 deadline.

As per the information available on the government portal, 18,535 household toilets have been constructed in the rural areas. Today, there are 37,080 households with toilet and 22 Community Sanitation Complexes (CSCs).

Talking about the challenges and how did the UT overcame it, Vijay Kumar, Extension Officer, Directorate of Rural Development, says,

Here the cost of material is way too high. The government provides Rs. 12,000 for a toilet, but here it takes us Rs. 70,000-80,000 to construct a toilet. Rs. 50,000 goes just in construction of septic tank. But we didn’t let it become a hurdle. We used to ask one simple question – did government pay for the TV you watch everyday or the bike you ride on? Did you ask for any monetary help for your wants? No. If you can afford luxury then why not basic sanitation? Also, we did awareness campaigns at panchayati level.

Today, 7 blocks, 3 districts, 65 gram panchayat, and 192 villages are verified ODF. Though the rural areas have achieved ODF in figures, now they wish to achieve it in terms of sustainability that is ODF Plus.

The urban counterpart of the city also performed in a quite similar way. In October 2017, capital city, Port Blair, was the first one to be declared ODF. It is only after that the other cities and ULBs came forward and started an extensive campaign. By the end of 2017, the urban areas were also declared ODF.

Puducherry On Its Way To Go ODF

Today, Puducherry is the only UT that has not achieved ODF status. The UT has already missed its initial deadline of October 2, 2017 and the overall deadline for UTs of March 2018. As per the government data, in 2014, rural areas of Puducherry were languishing at 66.06 per cent of sanitation coverage. In the financial year 2015-2016, zero household toilets were constructed. But slowly and gradually, the sanitation coverage rose and today it stands at 99.76 per cent with construction of 27,965 household toilets.

The major problem was poor mobilisation of funds. Also, people were not well aware of twin pit toilets. They thought it would fill instantly, but with awareness programmes we made it clear. Today majority of the toilets in the area are twin pit.

Urban counterpart of Puducherry is not far behind. As per the data shared by T. Sudhakar, Commissioner, Pondicherry Municipality, while 935 IHHL have been constructed, 340 are under progress and work order has been issued for 1,751 IHHL. Already 57 community toilets, and 23 public toilets exist in the city. Pondicherry municipality declared itself ODF on March 28, 2018. Now, along with building toilets, door-to-door waste collection system is practiced in the entire limit of Pondicherry Municipality. Scientific processing and disposal of waste is under consideration.

While the city is doing all to attain the ODF status, there are things that make it a tad difficult. Talking about the same, Mr. Sudhakar says,

The biggest challenge is to motivate the beneficiaries to construct a toilet. The delay in completion or construction of IHHL is mainly attributed to land problem, non-availability of sand, and other such issues. Also, Pondicherry is a tourism interest place so it becomes pivotal to keep the city spic and span.

Right from organising cycle rallies to spread awareness on ill effects of open defecation, holding cleanliness shramdaan to Lieutenant Governor Kiran Bedi, herself visiting various pockets of the UT to ensure the effective implementation of Swachh Bharat Abhiyan, Puducherry is doing all to go ODF.

Today, the officials and citizens need to brace themselves if they want to achieve the ODF title before October 2018. 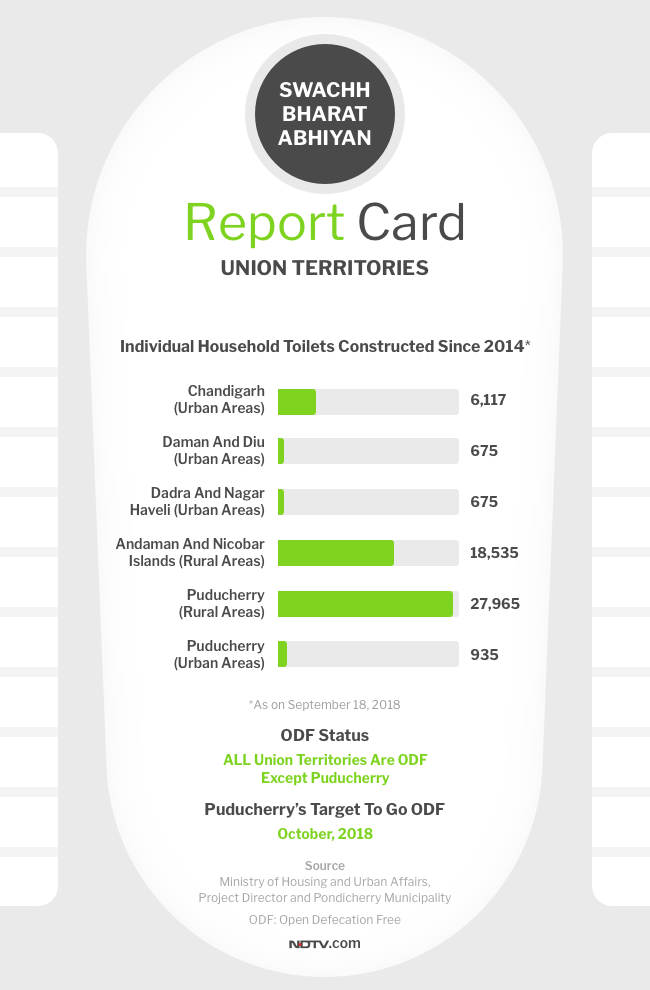 Please Note: Delhi is neither a State, nor a Union Territory, it is formally known as National Capital Territory of Delhi. However, the government for Swachh Bharat Abhiyan includes the local civic bodies of New Delhi under Union Territory list.

Lakshadweep is an Indian union territory, however it is not included in this article as the data of it is not available on Government dashboards.

Once Among The Worst Performing States In Swachh Bharat Abhiyan, Jammu And Kashmir Is Now ODF

Rural Himachal Pradesh ODF Since 2016 Works To Hold On To The Status, While Urban Areas Still Wait To Be ODF