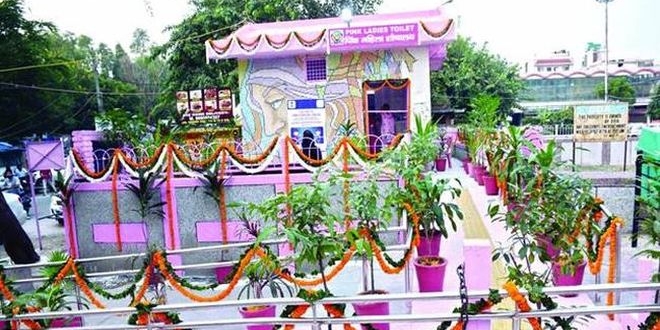 New Delhi: “I have never used a public toilet and certainly don’t have any plans to use one in the near future because public toilets are almost always dirty, unhygienic and home to numerous diseases. Also, in Noida, public toilets are constructed in isolated areas and personally, I don’t feel safe in going in the corners that don’t have proper lightning and male washroom being in the same complex”, says a 28-year-old woman resident of Noida Sector 37, on the condition of anonymity. Women often avoid using public toilets because of their poor condition and fear of safety, but it looks like Noida Authority has found a solution, tried and tested with some success elsewhere – Pink toilets.

Pink toilets are toilets armed with facilities like sanitary napkin vending machine, an incinerator facility for effective management of menstrual waste and a feeding area for breastfeeding mothers. Toilet complexes are painted pink so as to make them easily identifiable. The Noida Authority is planning to build four such pink toilets within three months.

Pink toilet is a good initiative considering no woman feels comfortable to walk up to a public toilet complex to find if there are women’s section or not. Since pink toilets are easily identifiable and are equipped with basic amenities, women feel comfortable to access them, says Jyoti Sharma from FORCE, an NGO working to create water and sanitation secure communities.

The project is being taken up on a pilot basis on the orders of newly appointed Chief Executive Officer Ritu Maheshwari. The Public Health Department of Noida Authority will be constructing four pink toilets at locations that witness a substantial footfall of women and girls that is majorly in industrial and commercial areas. Locations for these toilets will be finalised soon and accordingly the construction process will begin says Salil Yadav, Senior Manager, Electrical at Noida Authority.

Locations for the first batch of pink toilets is expected to be decided in two days’ time and within three months the city will have four toilets. The toilets will be constructed on BOT (Build, operate and transfer) basis under which Noida Authority will provide land and specifications for construction of toilets and private companies will help construct it. Elaborating on the same, Mr Yadav says,

Apart from construction, private companies will have to maintain these toilets for a particular period of time, which can be five to seven years, depending on the contract. In return, we will provide them a space for advertisement through which they can earn revenue.

Under the same model, the Noida Authority has constructed 98 public toilet units (PTUs) and around 55 community toilet units (CTUs) and achieved the coveted open defecation free (ODF) tag in January this year. All the toilets are furnished with a feedback machine, using which toilet users can rate toilets on the basis of cleanliness.

Watch: Use Google Maps To Find The Nearest Toilet

All the toilets are free for use and operational from 6 AM to 10 PM. Initially, we decided to keep these toilets open 24×7, but the fear of nuisance created by alcoholics restricted us from doing so, says Mr Yadav.

While some have lauded the move, others cautioned about cleanliness and hygiene, one of the reasons why women avoid using public toilets even in case of an emergency.

Considering the add-ons like sanitary napkin vending machine, pink toilets are beneficial and need of the hour, no doubt. While I don’t mind having a male toilet complex next to female toilets, I do consider maintenance, hygiene and cleanliness, says Anoushka Mudgil, a resident of sector 77.

A resident of sector 37 says, “If a toilet is specific for women and clean, I will consider using it, if need be.”

Hoping pink toilets will address the issue of cleanliness, 29-year-old Chandni Aggarwal, who works at a private company in Sector 5, told PTI, “Public toilets are definitely not in good condition. Regular cleaning is a must. Soap dispensers should be filled, and well maintained.”

The initiative is upright, but what matters is the functionality. Organisation getting contract for the construction and maintenance of the toilet should perform its job well else the idea will fall flat, says Anuj Yadav, Chief Operating Officer at Sukriti, NGO working in the Water, Sanitation, and Hygiene (WASH) sector, while talking to NDTV.

27-year-old Shipra Aeron, a software engineer, too focused on the need for hygiene and space for infants. She told PTI,

If these toilets, which are at the planning state, make sure to have space for infants would be good. Often we see mothers with their infants and toddlers struggling inside public toilets. Probably that can be addressed.

Noida is not the first city in India to construct a women exclusive pink toilet. In recent times, pink toilets have been constructed in Hyderabad, Uttar Pradesh’s Ghaziabad, Lucknow, and Vikaspuri area in Delhi, among others. Talking about the success of pink toilets in South Delhi Municipal Corporation (SDMC) area, Rajeev Kumar Jain, Superintendent Engineer at SDMC said,

We have constructed three pink toilets in areas under our jurisdiction and so far we have received positive feedback only. As per our records and feedback from the cleaning staff, toilets are being used by women and girls and females feel more comfortable in using pink toilets.

Sanitary Napkins Are Being Given To Adolescent Girls At Subsidised Rates, Says Health Minister Harsh Vardhan