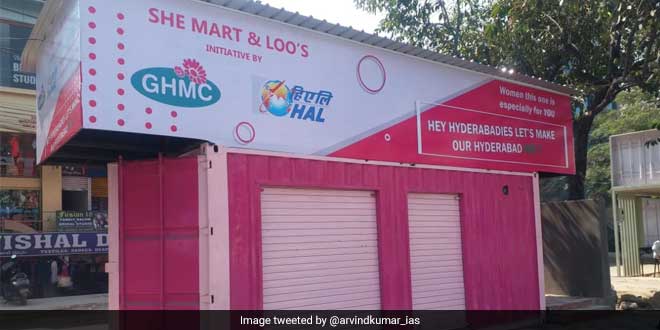 Principal Secretary Arvind Kumar of GHMC inaugurated the first pink toilet in the city on February 6 near Chandanagar. The remaining two toilets were inaugurated a few days later.

Inaugurated “ She-mart & loo” exclusively for women & the first one having privacy of “Baby feeding centre” managed by SHG group- will sell eco-friendly products. Thanks Hindustan Aeronautics ( HAL) for taking it up as #CSR & thanks @zcwz_ghmc, MLA Sherlingampally pic.twitter.com/8BJYOwzjWR

Talking to NDTV about how the pink toilets will make access to sanitation easy for women and girls, Hari Chandana Dasari, GHMC West Zone Commissioner says,

Whenever anyone talks about a public toilet, the first thought is to avoid using them considering its cleanliness and hygiene status. Our corporation is trying to change people’s behaviour by giving them international standards of sanitation like the loo cafes.

Since most of the public toilets in Hyderabad only have male caretakers, women feel shy to use the toilets especially during their menstruation days. By installing pink toilet, we want to provide the best sanitation to women, she adds further. 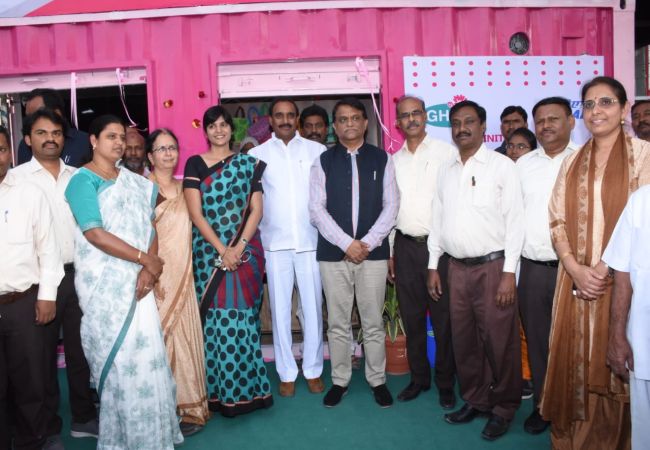 Coloured in pink, the hygienic toilets have multiple facilities

Coloured in pink, the hygienic toilets have multiple facilities including sanitary napkin vending machines, incinerators to dispose of menstrual waste, and a separate area for breastfeeding mothers. Buckets, towels and soaps are also available for free for bathing. The vending machines will give sanitary pads at a subsidised rate. Anyone can deposit Rs. 5 in the machine and get a sanitary pad in return.

The She Mart store located along the pink toilet sells eco-friendly, upscaled and recycle products like jute bags, tiles and clothes made from recycled plastic. The cloth and jute bags are manufactured by city-based Self-Help Groups (SHGs). The revenue generated from the Mart will be used to maintain the toilets.

The She Mart store located along the pink toilet sells eco-friendly, upscaled and recycle products

Several SHGs were trained by the GHMC to make jute and cloth bags last year. However, with lack of marketing opportunities they were not able make a profit. The Mart will help them earn money, says Ms Chandana.

Installation of pink toilets will also benefit women from underprivileged background as they will be provided jobs. The district administration has hired four women for each of its toilet to maintain cleanliness and help the users to avail the benefits at the toilet.

In October 2017, the South Delhi Municipal Corporation installed a pink toilet in an area which witnesses a substantial footfall of women and girls. Other places like Lucknow and Kaushambi in Karnataka have also opted for the concept to provide separate sanitation facilities to women.