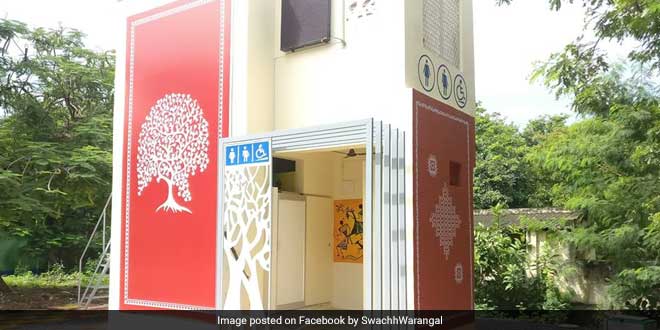 Mumbai: For Telangana based 37-year-old Vidya Panicker, having access to a brand-new toilet with handwashing and bathing arrangements didn’t stop her from defecating in the open. Her hope of finally using a toilet built under Swachh Bharat Abhiyan was dashed after the public toilet, newly built by the Greater Warangal Municipal Corporation (GWMC) in March 2017 was at an inappropriate location and had a male caretaker. Like Vidya, 21 other women from the same vicinity were uncomfortable to use these public toilets. When the civic corporation conducted a study involving 197 women they found several reasons for this, ranging from uncleanliness, presence of men near the location of the toilets, restricting women from using these toilets. Based on the suggestions of participants, the corporation designed exclusive toilets for women in October 2017 integrating features like female caretakers, choice of squatting and raised seats and means for disposing used sanitary napkins. Within days of its launch, the number of open defecation instances involving women have come down significantly.

To help tackle this issue, WaterAid, United Nations International Children’s Fund (UNICEF) and Water and Sanitation for the Urban Poor (WSUP) have jointly launched a guide for government and toilet-building agencies to develop toilets that cater to the needs of women and girls.

Also Read: World Toilet Day: The Empowering Of Communities In Some Of Delhi’s Slums Is Resulting In A Silent Sanitation Revolution

What Are Female-Friendly Toilets?

In a recently launched guidebook titled ‘Female-friendly Public and Community Toilets’, these organisations have listed factors that make a toilet female-friendly:

Why Are Female-Friendly Toilets Essential?

Sanitation is a cornerstone of public health. Improved sanitation contributes enormously to human health and well-being, especially for girls and women. We know that simple, achievable interventions can reduce the risk of contracting diarrhoeal disease by a third, said WHO Director-General Dr Margaret Chan.

Also Read: Clean Toilets, Better Menstrual Hygiene Services: Here Is How A Duo Is Building A Healthier Mumbai For Women

Lack of female-friendly toilets can put women and girls at greater risk of damaging their health. Unlike men, women cannot openly urinate and so restrict themselves from eating or drinking to delay the toilet use. This may lead to several health problems like Urinary Tract Infections (UTIs), kidney stones and weaker bladder muscles.

Talking to NDTV about the health risks that pose women in India, VR Raman, Head of Policy at WaterAid India says,

While using dirty and unhygienic toilets lead to several infections, absence of adequate and hygienic toilet facilities most often also makes women to postpone or hold back their physiological needs. It is critical to go to the toilet at the right moment and to avoid prolonging peeing or pooing, since such retaining can cause many health issues. Holding back urine for long can cause infections and can lead to issues with bladder muscles as well as kidneys. Similarly, if faeces are not expelled in time, the small intestine tends to collapse, stopping assimilation of nutrients, leading to worsening of the already deficient nutrition of the poorest women in India, who suffer high rates of anaemia and immunosuppression. It also makes gases to accumulate in the intestine, leading to damage of intestinal systems and vulnerabilities to infection. Women from poor economic backgrounds and from working class has added burden of poor-quality water and food, which leads to chronic illnesses and related risks.

Menstruating women need a private and accessible toilet. Being unable to manage menstruation hygienically affects women’s health, mobility and dignity. Using the same sanitary product for too long can increase the risk of infection, while not washing hands after changing menstrual products can help spread infections such as Hepatitis B. Pregnant women using toilets need to be protected from various infections and illnesses too.

The fact that we had to come up with this guide in itself indicates the unfortunate situation prevailing around addressing the needs of women and their health, which should have been addressed long ago. Though we have initiatives like female-friendly toilets in Hyderabad, Delhi and Pune, initiatives in Delhi and Bengaluru giving free or paid access to toilets in restaurants and the SBM (U) Toilet Locator android app by the Ministry of Housing and Urban Affairs, we still have to understand and address sanitation needs of women at scale. In most places, the concept of having adequate toilet facilities for women is missing, says Mr Raman.

Adding to this, the concept of maintaining the available toilets hygienically is also not well established. The guide, in this context, has taken into account the needs of a range of female population from small girls, menstruating women, pregnant women, women with small kids, women with disabilities, to elderly women  and to make it as inclusive as possible. The success of this initiative will depend on the realization and implementation of these recommendations in scale, by local bodies.

Further talking about challenges that pose the female-friendly toilets in India, he says,

Maintaining hygiene and cleanliness in public toilets is a challenge that is going to remain, especially in crowded places like railway stations, bus stops, markets and so on. Unlike in elite places like malls, where the maintenance staff has been hired and deployed for routine cleaning, the public toilets in such crowded places do not have sufficient number of caretakers to ensure cleaning between frequent uses. Community toilets for the urban poor are missing many of the critical elements that women would require too.

WaterAid, together with UNICEF, has prepared a shorter version of this guide that consists of key takeaways from the global guide and necessary additions for the Indian scenario, and submitted it to the Swachh Bharat Mission (Urban) (SBM-U). WaterAid expects this to be further taken up by the SBM-U soon, preferably on World Toilet Day (November 19), as a priority with the urban local bodies across the country.

World Toilet Day 2018: How India Is Gearing Up For The ‘D-Day’ To Achieve The Dream Of Swachh Bharat