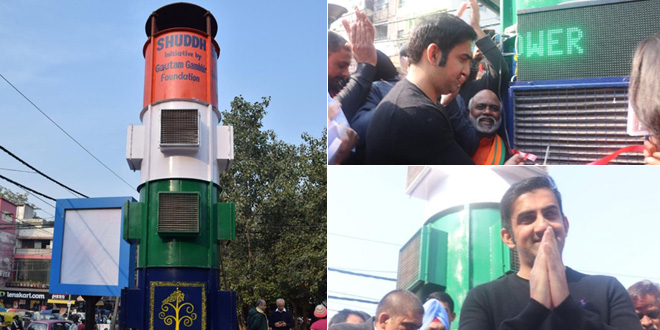 New Delhi: In view of the alarmingly high levels of air pollution in the capital, the citizens of Lajpat Nagar in Delhi welcomed the installation of a giant air purifier also referred to as smog tower on Friday (January 3). The smog tower was installed by Traders’ Association Lajpat Nagar (TALN) and Gautam Gambhir Foundation, a non-profit organization founded by Member of Parliament (MP) Gautam Gambhir. While talking to NDTV about the initiative, Sanjeev Madan, President of TALN said,

This is Delhi’s first smog tower. Such initiatives are very much needed to be undertaken as Delhi is a pollution capital after crossing all pollution charts in India.

Talking about the features of smog tower, Aparajita Singh, an official at Gautam Gambhir Foundation said that the smog tower, which is installed in Lajpat Nagar’s Central Market, is 20-feet-tall and runs on electricity. The gigantic air purifier is fitted with exhaust fans to suck in polluted air with the help of a big inlet unit. It has a capacity of treating 2.5 Lakh to 6 Lakh cubic meters of air per day. She said that the purifier collects more than 75 per cent Particulate Matters PM 2.5 and PM 10 from the air and releases bubbles of fresh and purified air. 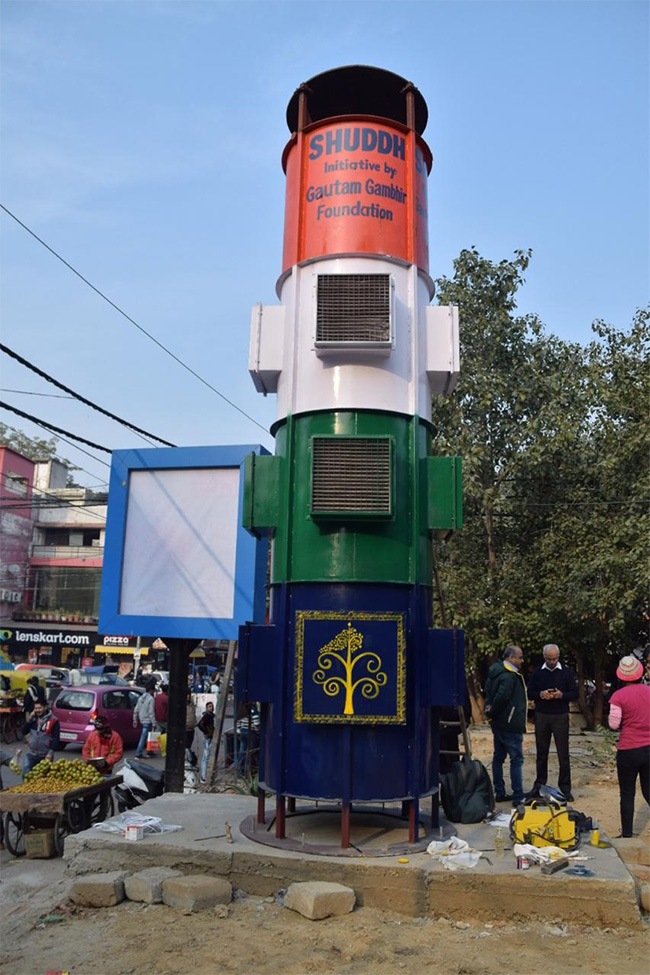 The smog tower is installed in Lajpat Nagar’s Central Market

Speaking at the inaugural event, former cricketer Gautam Gambhir asserted that combating air pollution in the capital is the need of the hour. He said,

This air purifier is a prototype. We will analyze its performance and then install several purifiers across my constituency. Every step in the direction of making Delhi pollution-free, saves lives.

According to Ms. Singh, the cost of the smog tower is around Rs. 7 Lakh, which is borne by the Gautam Gambhir Foundation while the maintenance cost will be taken care of by TALN. She said that the foundation had been working on various solutions to fight air pollution since long. She said,

We have been conducting awareness-building drives and also distributed air pollution masks to thousands of children across the capital. We soon realised that this will not help and there is a need for a bigger intervention. Therefore, after many consultations with engineers and other professionals, we came up with a proto-type of a giant air purifier. We will be monitoring it closely now and if this attempt works and is able to make a dent in the pollution levels of the area, we will work on installing more of such smog towers.

Earlier in November 2019, Supreme Court had asked the Central and the Delhi government to come up with a road map on installing smog towers in the national capital region (NCR) to combat air pollution.

While China has been already experimenting on using smog tower to clear the ambient air, air pollution experts and environmentalists have expressed doubts and concerns regarding the feasibility of smog towers. On being asked about how effective smog towers are, Anumita Roychowdhury, Executive Director, Research and Advocacy, Centre For Science and Environment,

There is no data to establish that smog towers can clean up outdoor air pollution. This is not part of global regulatory action. Instead of diverting and locking up valuable resources in these gizmos, take aggressive action to reduce emissions from pollution sources to fight air pollution.

A member of Care for Air, a non-governmental organization that works on issues of air pollution said that smog towers are nothing more than band-aid solutions. As per her, these are only a very short term emergency measures and cannot be relied upon. She said,

Smog towers are completely useless in bringing down PM2.5 levels by any significant amount, and could even add to pollution when their filters are disposed in our already overflowing landfills, and eventually burnt.

Swachh Survekshan 2020 Gets Underway, Here Is How Cities Will Be Assessed This Year