New Delhi: Sundarbans is a geographically vulnerable place as it experiences natural calamities on a regular basis and this vulnerability of the delta often works against it and affects people’s access to healthcare services. When high tides, storms and cyclones take away lives and livelihood, seeking healthcare takes a backseat. Talking about the same, Dr Samiran Panda, Additional Director General, ICMR and Head of the Epidemiology and Communicable Diseases who has researched on Sundarbans, said, “The purchasing power of the population in an area which gets devastated would naturally go down repeatedly. It’s like a repeated assault on their livelihood. You might have a static healthcare centre but it’s difficult for many to access it. One has to cross water bodies which takes time.”

32-year-old Sanjukta Manna from Ramnagar Abad village located in the Patharpratima sub-division of South 24 Parganas works at an NGO-run school and is involved in admin work. She lives near the river, which means that she is one of the major affected victims during storms and cyclones. A health centre is around 4kms away from her house but for emergencies, she has to visit a government hospital located in the Diamond Harbour, 20kms away from her house. On May 10, when her husband, a farmer, met with an accident and suffered a head injury among others, he had to be taken to the government hospital. She believes that the delay in treatment has led to a blood clot in her husband’s head. Currently, her husband is undergoing treatment in Kolkata, but for Sanjukta, the family’s poor economic condition is a cause of worry.

40-year-old Sulota Phurkait runs a humble tea stall next to the Hotel Sonar Bangla in Gosaba, Sundarbans. Two years ago, after her husband injured his leg, Sulota held the reins of her house and opened a tea stall where she also prepares customised food like flatbread, eggs, crabs, among others – depending on what the guests demand. Sulota, a mother of three – two girls, both married and a son who now works as a labourer – informed that to access primary health care in Gosaba she has to travel by boat for an hour. For intensive care, she has to go to Kolkata. 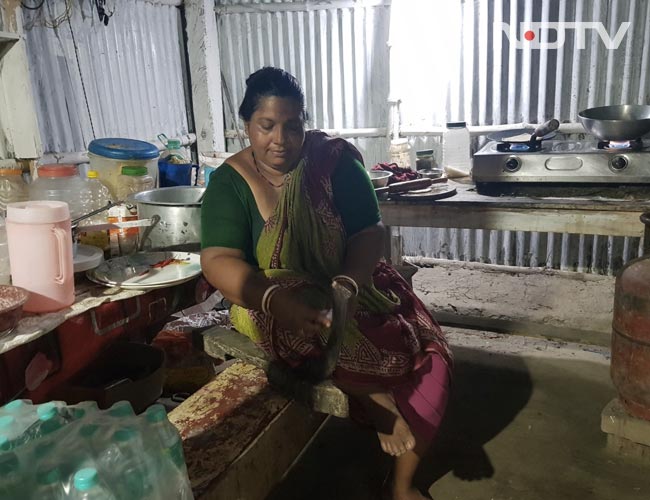 Sulota Phurkait sitting inside her tea stall, cutting vegetables and preparing dinner for her guests

We have done medical camps and found that people are struggling to make ends meet. One of the reasons behind poor access to health services is transportation. If someone gets a heart attack, they often die by the time they reach the hospital. During labour pain, women have to cross the river.

In Pics: World Environment Day 2022: How Climatic Change Is Depleting Lives in Sundarbans

Dr Dhires Kumar Chowdhury, Geriatrician and General Physician and President of NGO Banchbo working in the Sundarbans for over two decades told that elderlies and those living in remote areas like Bali island, Ghoramara or the ones closer to the Bay of Bengal suffer the most. Reason being, lack of services and transportation. He said,

Older people can’t travel to the public health centre because of their age and transportation is another challenge. Many elderlies suffer from chronic ailments, hypertension, diabetes, thyroid and even cancer. They require regular follow-up which doesn’t happen because of poor accessibility. Seeking treatment at private hospitals requires money but the poor economic condition of the residents adds to their misery.

Because of the prevailing challenges, the people of Sundarbans are left to the mercy of local NGOs who are also dependent on the funding for daily operations. For example, in 1997, NGO SHIS (Southern Health Improvement Samity) spearheaded by M. A. Wohab started a floating boat dispensary to serve the people of this region. The initiative expanded to four boat clinics, each covering a village a day.

When Sarita Gyne developed skin disease resulting in inflation of arms and legs, she came to a boat clinic run by the SHIS Foundation. She said,

Even a mosquito bite leads to spots all over my body. I don’t have anyone in the family to take me to the government or private clinics in the city which is why I come to this boat to seek treatment. The doctors here are good.

There are many like Sarita who either because of lack of options or finances resort to local level treatment. Dr Dhires Kumar Chowdhury through his NGO has found a prevalence of mental illness as well. He believes one of the most neglected health impacts of the regular occurrence of cyclones and other natural calamities is the impact on mental health. He said,

We do monthly Geriatric OPD at Patharpratima block and there we see many patients complaining of anxiety and insomnia which affects their blood pressure and blood sugar levels. Elderlies are concerned about their family, their economic condition and the possible impact of future cyclones. After every storm, we see a rise in people complaining of mental illness. To top that, accessibility of minimum healthcare has decreased after COVID.

West Bengal, Sundarbans: A young girl registers herself at a Mobile Boat Dispensary for check-up

What can be done to uplift the five million people of the Sundarbans? Dr Panda recommends indigenous involvement in not only identifying the problem but also finding solutions. And this can be done through community engagement.

If you have to identify what could help people absorb iron from the food better, you need to know their food habits. For example, rice is their staple food from which they get carbohydrates but what about protein? Do they have access to pulses that is a vegetarian source of protein or some animal source of protein? By working with them one has to find solutions. Imported solutions from outside don’t help. We can create an app and use technology, especially mobile phones to know what are they eating and what could help them and accordingly tweak their diet. Harnessing technology and community engagement is the key, he said.

Dr Sugata Hazra, Professor, School of Oceanographic Studies, Jadavpur University says that there is only one way to save the delta – both man and mangrove – to bring back freshwater to Sundarbans. If we have freshwater, we can handle any crisis, even climate change, he said.

According to a study titled “Spatial Inequality in Health Care Infrastructure in Sundarban, West Bengal, India”, published in the International Research Journal of Social Sciences in 2014, not a single block has been found where less than 30,000 persons are served by one PHC. In contrast, there are four blocks namely, Canning-I and II, Kakdwip and Jaynagar-I where the population served per PHC is more than four times than the existing norms. Under the National Health Mission (NHM), PHCs are established to cover a population of 30,000 in rural areas and 20,000 in hilly, tribal and desert areas.

NDTV reached out to Dr Siddhartha Niyogi, Director of Health Services, Department of Health and Family Welfare, Government of West Bengal to understand the healthcare infrastructure in Sundarbans and the initiatives being taken by the government for the upliftment of people. He said,

For Sundarbans, we have one hospital in Basanti in the Canning Sub-division of South 24 Parganas. We have made arrangements to provide healthcare facilities on the boat. There is one waiting hub where pregnant women can wait for a few days ahead of delivery. Health is not a problem in Sundarbans. The issue is of people living near the forest and we can’t help it. We have health workers who go to sub-centers.

Dr Niyogi didn’t share any further information on the lack of healthcare services in the region or any data on the existing facilities.

In June 2020, a newsy agency PTI reported that West Bengal Chief Minister Mamata Banerjee has urged NITI Aayog to form an inter-disciplinary team to initiate preparation for a masterplan for the Sundarbans, a UNESCO World Heritage site wreaked by frequent cyclones.

I would like to request NITI Aayog to kindly commission the preparation of a Master Plan by an inter-disciplinary team of experts covering all aspects of socio-economic development of this ecologically fragile region, she said, as quoted by PTI.

As per some news reports, the government has also initiated a water ambulance service to assist quick transportation of patients in case of emergencies. As the climate crisis deepens exhibiting greater challenges, how much impact these measures will have in improving access to healthcare in the region is something to see, but a speedy and concerted effort is needed to ensure that the people of the region living on the frontlines of climatic turmoil have all that they need to survive this existential crisis.

Sundarbans, The Cyclone Capital Of India: The Direct Impact Of Cyclones On Health