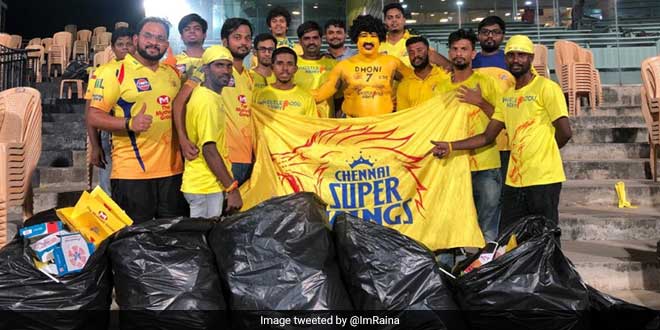 New Delhi: On April 6 (Saturday), after a nail-biting match between Chennai Super Kings (CSK) and Kings XI Punjab (KXIP) at M. A. Chidambaram Stadium in Chennai, Tamil Nadu, all cricket enthusiasts left except a bunch of CSK fans. ‘Whistle Podu Army’, touted as an official fan club of CSK, stayed back post the cricket match to clean the stadium and waste left behind thousands of people. From pizza boxes, plastic water bottles, chips packet, to cans and other waste items, the Whistle Podu Army collected over 10 kilos of garbage.

Recognising Whistle Podu Army’s swachh efforts, Suresh Raina, the 32-year-old cricketer, known as Chinna Thala (right hand of the powerful leader MS Dhoni) among his fans posted on twitter, “So proud to see #WhistlePoduArmy joining hands for #Cleanliness campaign! Post our last match, they collected over 10 kilos of garbage at the stadium. Are you striving for a Clean India? All you gotta do is post pictures/videos of cleaning your area using: #DontBeMeanKeepItClean”

So proud to see #WhistlePoduArmy joining hands for #Cleanliness campaign! Post our last match, they collected over 10 kilos of garbage at the stadium.

Are you striving for a #CleanIndia? all you gotta do is post pictures/videos of cleaning your area using: #DontBeMeanKeepItClean pic.twitter.com/Gjyzvv8t6X

Ahead of IPL (Indian Premier League), a Twenty20 cricket league in India contested by eight teams representing eight different cities in India, cricketer Suresh Raina, requested IPL viewers to keep stadiums clean and not leave waste behind them through a video series.

The @IPL fever is kicking in! Aren’t you excited? But, hang on! Did you know an average #cricket match in #India produces 3-4.5 tons of waste. So, how are you going to help keep our stadiums clean? I'd say, go for the bins & #DontBeMeanKeepItClean. @SwachhBharatGov #SwachhIndia pic.twitter.com/UHKIeWXTvr

The cricketer listed a couple of ways to maintain cleanliness in stadiums like picking up trash before leaving, and using dustbins.

On social media, an official handle of CSK too supported Suresh Raina’s campaign and asked people to join the swachh team. “When #Yellove is a family and #AnbuDen is truly home! Join in #ChinnaThala’s initiative and post pictures/videos of you having cleaned your area, using hashtag #DontBeMeanKeepItClean! #WhistlePodu for a cleaner surrounding!”

When #Yellove is a family and #AnbuDen is truly ????! Join in #ChinnaThala's initiative and post pictures/videos of you having cleaned your area, using hashtag #DontBeMeanKeepItClean! #WhistlePodu for a cleaner surrounding!???????? https://t.co/jnNNKlQEo0