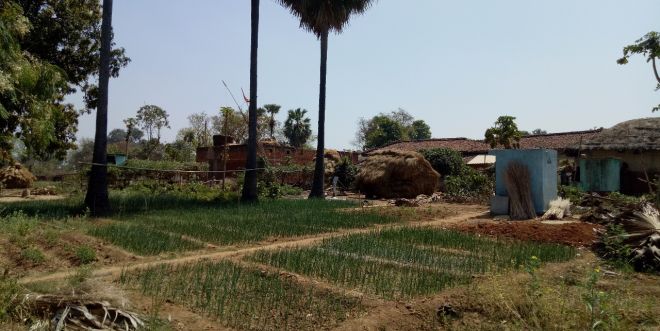 New Delhi: “It’s perfectly safe and clean to empty a twin-pit toilet and use its content (human excreta), which over time degrade completely and turn to solid, odorless, pathogen free manure, for agricultural purposes,” said the 65-year old Panbati Devi, who teaches this lesson to everyone in her gram panchayat Paraspani in Jharkhand’s Godda district. While educating people to use the golden manure or organic compost taken out of a twin leach pit toilet, Panbati Devi refers to her onion yield, which got far better than previous years with the manure from her twin-pit toilet. The elderly lady, who is a member of the Maa Bharti Mahila Mandal, a local Self Help Group (SHG), even attributes the size and yield of the onion to use of twin pit manure.

All the district officials are delighted to see that Panbati Devi has used the twin pit compost for growing onions, which turned out to be bigger and of better quality and also weighed more than usual onions grown using chemical fertilisers and cow dung manure.

While introducing the twin-pit toilet model which is best suited for rural communities to end open defecation, the Swachh Bharat Mission team had demonstrated to the people about how the twin pit model worked and emphasized that there was nothing wrong with touching the fecal matter turned compost.

Talking about how Panbati Devi got an idea to use twin-pit manure for agricultural purposes, Shibnath Chaterjee, Zila Swachh Bharat Prerak, told NDTV:

While the toilets were being constructed in the Paraspani gram panchayat of the Pathargama block in the Godda district in 2016, we ensured that the toilet beneficiaries become aware of the advantages of using a twin pit toilet, which not only ensure family hygiene but also provide natural compost. And to make people understand that it’s safe and clean to empty a twin-pit toilet, we used enter in a pit and take out manure from it… thus hitting hard the stigma associated with the activity of emptying these pits after closing them for six months or a year. And, when we showed the retrieved dried up faecal matter, which had turned into manure, to villagers in our own hands, they understood that once they close one pit for months, the excreta get converted into clean compost which is rich in nitrogen, potassium and phosphorus, and is extremely useful in agricultural practices.

According to the district officials, the residents of Paraspani gram panchayat are now very well aware of the advantages of the twin-pit technology, wherein they have two pits for collecting solid waste from household toilets – after one pit is filled with human waste, it is closed and the waste is collected into the second pit. While the waste in the first pit is allowed to dry for over a year, the dried waste is then taken out and used as organic manure for farms.

Panbati Devi now gives other villagers an example of how effective is the manure for agriculture and horticulture purposes. In fact, she herself extracted the compost from a pit and demonstrated its use in kitchen gardens and in fields, added Shibnath Chaterjee. 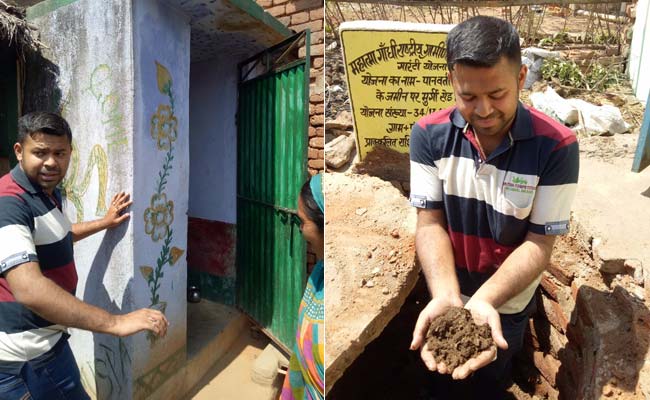 Panbati Devi followed the instructions of Swachh Bharat Mission officials carefully and implemented it in her life, and is now overjoyed with the results… the best onion yield over the years. She and others in the community who have had benefitted from the system will inspire others in their neighbourhood, an official added.

With sanitation coverage of just over 45.12 percent, Jharkhand’s Godda is working on a mission mode to become an open defecation free (ODF) district by October 2018. The district administration is hopeful that by October 2018, they will not only be able to provide individual household toilets to all but will also successfully inculcate the necessary behavioural change among people as in the case of Panbati Devi.

Related Topics:
Jharkhand Toilets
Up Next