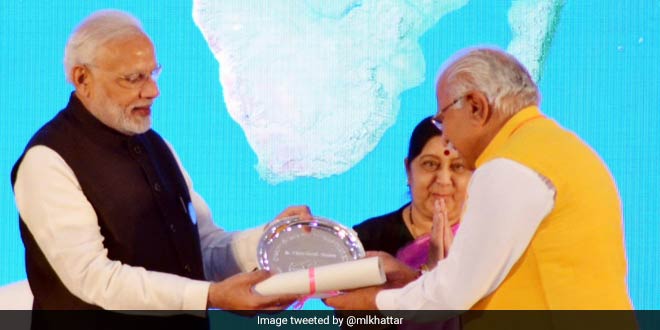 Mumbai: Topping the chart of Swachh Survekshan – Grameen, rural Haryana bagged the cleanest state title, with three of its districts – Gurugram, Karnal and Rewari among the six cleanest districts of India. Announcing the results of the survey that rated districts and villages basis on cleanliness and sanitation, on the fourth anniversary of Swachh Bharat Abhiyan on October 2, Prime Minister Narendra Modi presented the award to Haryana Chief Minister Manohar Lal Khattar at an event in Delhi. The Chief Minister lauded the efforts of all citizens, administration and those who were actively involved in making this possible. He said that Haryana will continue to work towards a Swachh Bharat as envisioned by Mahatma Gandhi.

Honoured to receive the No. 1 state award in the #SwachhSurvekshan – Grameen. The award shows that the #SwachhBharat campaign, which was initiated by PM @narendramodi ji is inspiring millions of citizens across the state and the country, Chief Minister Khattar tweeted.

Honoured to receive the no. 1 state award in the #SwachhSurvekshan – Grameen. The award shows that the #SwachhBharat campaign, which was initiated by PM @narendramodi ji is inspiring millions of citizens across the state and the country. #SwachhBharatDiwas pic.twitter.com/6JswEp1tyr

Haryana was one of the first states in India to declare all its urban and rural areas Open Defecation Free (ODF) in 2017. Both the urban and rural areas in Haryana have successfully completed two rounds of third-party verification process with no open defecation cases reported in the last one year. The state is now working towards an ODF plus tag, which refers to total sanitation in terms of solid and liquid waste management and improved sewerage lines.

Over six lakh toilets (6,34,442) in rural areas and 5.60 lakh toilets in urban areas were constructed between 2014 to 2017 in Haryana, to make the state Open Defecation Free. The sanitation coverage of the state was 77.83 per cent when Swachh Bharat Abhiyan was launched and today it stands at 100 per cent. In terms of liquid and solid waste management, the state has already sanctioned 1,360 projects of scientifically treating solid waste and integrated the flagship programme GOBAR Dhan (Galvanizing Organic Bio Agro Resources Dhan) Scheme.

Also Read: Champions Of The Earth Award: This Honour Is For Women Who Have Made ‘Recycle’ A Part Of Their Lives, Says PM Modi

To tackle the liquid waste in rural areas, the state government will build 20 solid and liquid waste management projects in three of its districts – Yamunanagar, Kurukshetra and Kaithal. These projects will tackle water pollution in Saraswati river. As for the urban areas, the government is setting up Haryana’s first Integrated Solid Waste Management Project in Gurugram and Faridabad.

Here are the notable performers in the Swachh Suvekshan – Grameen:

The cleanliness survey was carried out on a comprehensive set of parameters including district-level surveys of public places like schools, anganwadis, Panchayat and citizen’s perception of Swachhata and their recommendations for improvement of the programme.

6,980 villages in 698 Districts across India were covered. Around 1,74,500 citizens were interviewed in villages for their feedback and overall around 50 lakh citizens’ feedback was obtained. Also, citizens were mobilised to provide feedback on sanitation relation related issues online using an application developed for the purpose.