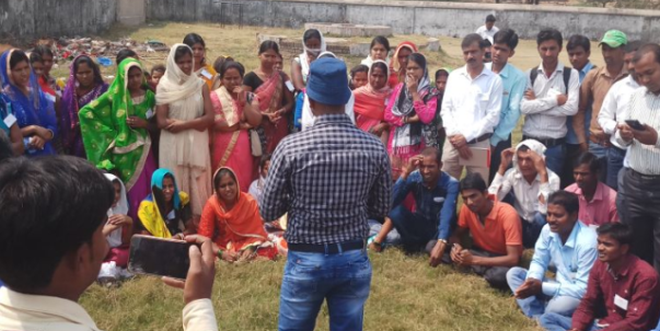 New Delhi: To declare Jharkhand’s Giridih district open defecation free (ODF) by July 2018 (and verification by October) seems to be a daunting task for the officials for a number of reasons. After four years of the launch of Swachh Bharat Abhiyan in 2014, the district’s sanitation coverage stands at 62 percent with the construction of over 1.9 lakh toilets, while the target is over 3 lakh toilets. Furthermore only two of the 13 blocks have been ODF so far, along with over 13,000 dysfunctional toilets that need to be fixed. Not deterred by these figures, the officials however, seem to be confident to overcome all these challenges and make Giridih ODF. To take on the sanitation challenges, the district administration earlier created a pool of women masons (Rani Mistris) to ensure that the toilet construction activity does not get hampered by the non-availability of local masons (men) who preferably take up lucrative construction activities rather than building toilets. Now, to accelerate the toilet construction activity, they have created a pool of 164 Swachhagrahis, who have been trained to undertake Community Led Total Sanitation (CLTS) methods for mobilising communities to completely eliminate open defecation.

Community-led total sanitation (CLTS) is an approach towards bringing in behavioural change in a community to improve sanitation and hygiene practices. As part of this exercise, people are triggered to end open defecation. As part of this triggering exercise, the Swachhagrahis undertake activities like ‘walk of shame’ (walking with community to the sites of open defecation), putting faeces in front of people in order to make them understand the way flies move between their food and faeces, to stimulate a collective sense of disgust and shame among community members.

The goal of this exercise is to help community members see for themselves that open defecation has disgusting consequences and creates an unpleasant environment.

How the Swachhagrahis were trained on Community Led Sanitation Approach

During the four days of CLTS training, several sessions were facilitated to impart the knowledge about the utility, principles and its practices. After a short introduction of all the participants, discussion was made regarding the objectives and the sanitation status of Giridih district. Apart from discussing the technical issues involved in the construction of toilets, stress was given on to motivate the trainees so they could in turn stimulate the community members to adopt safe sanitation practices, said Akash Ganguly, Zila Swachh Bharat Prerak, Giridih.

Also, sessions were conducted on triggering outcomes, follow-up strategies, technology options towards constructing toilets, attitude and behaviour of CLTS practitioners etc. However, the prime focus of the workshop remained on making it a practical training by providing every participant (Swachhagrahi) an opportunity of hands-on experiential learning through triggering in at least two villages during the workshop.

As part of this exercise, the triggering was done in the evening time, and on the next day, the morning follow up was conducted in the same villages to make the triggering even more impactful, Mr Ganguly further added.

During the implementation of Swachh Bharat Abhiyan, the district officials observed that there are a certain marginalised areas where the practice of open defecation is rampant and is and widely accepted as a norm by the community. 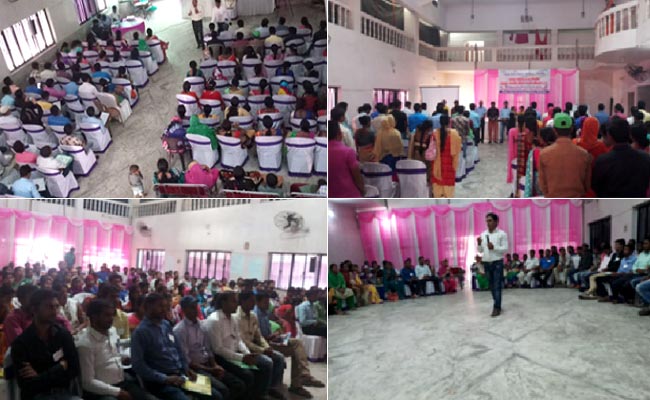 The people in these areas were not just reluctant to build toilets at home but even those who got toilets at home don’t seem to use it. Under these circumstances, sensitising the entire community about the ill effects of open defecation and convincing them to construct toilets at home was the only way forward. To trigger behavioural change among such people to adopt safe sanitation practices (construct toilets at home and stop defecating in the open), the district officials trained the Swachhagrahis with the help of UNICEF between March 21 and 24. From going door-to-door to educate people on why they should construct a toilet at home and use it to organising clean-up drives, the swachhagrahis are now working to build a momentum of jal andolan to make Giridih free from the menace of open defecation, Mr Akash Ganguly further added.

When asked what sort of triggering activity works best to motivate people to construct and use toilet at home, one of the Swachhagrahis said:

We collect the human waste from the surrounding open defecation site and keep it alongside the food items on a table in front of the community members. Shortly, the flies used to sit on the human waste and then on the food items as well. After seeing this, the people immediately realise the hygiene concern that we are referring to. This activity works best… as the people confront the crude facts about mass open defecation and its negative health impacts, they get convinced to construct toilets and adopt safe sanitation practices.

Outcome of this exercise

The training resulted in the formation of a team of 164 trained CLTS practitioners who are presently engaged in pre-triggering, triggering and follow-ups in their respective areas. The participants in their respective Block level teams have prepared their action plans for implementing CLTS under the guidance and ownership of the District Swachh Bharat Mission team.

The administration is very much hopeful that Swachhagrahis will motivate the marginalised communities to take an immediate action towards stopping the practice of open defection and adopting safe sanitation practices, which will ultimately help in making the district open defecation free as per the set deadline.