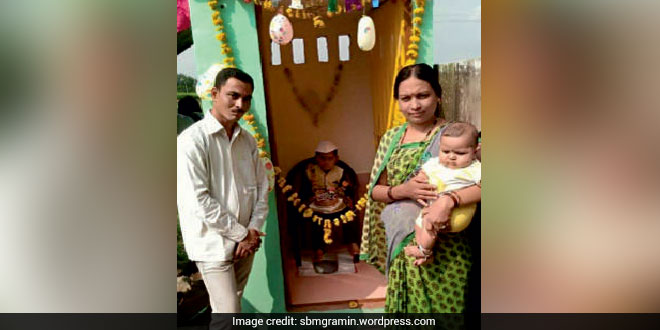 New Delhi: Preparations are in full swing in the Sagare household in Halgara village in Maharashtra’s Latur district. Flowers, balloons, are up. The Welcome signage is in place. The multi-coloured decorations with big bold Happy Birthday letters are up. The birthday cake is ready and waiting to be cut. Final touches are being given to the Rangoli on the floor, bright colours that bring alive the letters of ‘Welcome’ at the entrance of the toilet – the venue for the Birthday party of the junior most Sagare who turns four. That’s right the party is in Sagare household’s toilet!

Also Read: Taking On Stigmas And Taboos: Comptroller And Auditor General Steps Into A Toilet, Empties It Barehanded

When asked why they chose to decorate the toilet to celebrate their son’s birthday, the Sagare couple said,

We realised about the adverse effects of poor sanitation practices like open defecation on health, particularly on children. A swachh official told us how open defecation contaminates our water resources leading to regular stomach upsets, cholera, typhoid, diarrhoea and other gastrointestinal infections, and how it also affects pregnancy outcomes… sometimes leading to stunting (preventing growth or proper development) in children. We don’t want that due to our open defecation, children should suffer. So we decided to celebrate our son’s birthday in a toilet to send across a social message about the importance of not just having one but also using a toilet to end open defecation. And just how we keep our homes spotlessly clean, we should keep our toilets clean as well… so clean that one can even celebrate special occasions.

“Unless and until everyone in the country adopts safe sanitation practices, our children will not be fully safe,” said Ajay Sagare, the father of the 4-year-old.

While motivating them to adopt safe sanitation practices, the doctor practicing in their block informed the couple how children under TWO years OF AGE are vulnerable to diarrhoea and how the disease permanently alters their gut, thus preventing the absorption of essential nutrients and ultimately putting them at risk of stunting and even death, said Navnath Gore, Zila Swach Bharat Prerak, Latur.

Inspired by the government’s ‘Swachh Bharat Abhiyan’, Mr Sagare and his family wanted to ensure that all houses of their Halgara gram panchayat have a toilet.

The couple even shared the picture, where they can be seen standing in front of the decorated toilet with the birthday boy sitting on a chair (holding the birthday cake) inside the toilet, with their relatives and other villagers. The idea was to successfully pass on the message to have a toilet at home and put an end to the age-old practice of open defecation, affecting both human health and environment.

When Dr. Vipin Itankar, CEO Zilla Parishad, Latur District received the photograph on his WhatsApp, he shared it with all the swachh officials, said Mr Gore.

‘Go Green, There Is No Planet B’, Says Shin Chan And Garfield At ‘Say No To Plastic’ Walk In Mumbai

25 Volunteers Collected Over 3.5 Tonnes Of Waste From Goa’s Monkey Beach And Grand Island