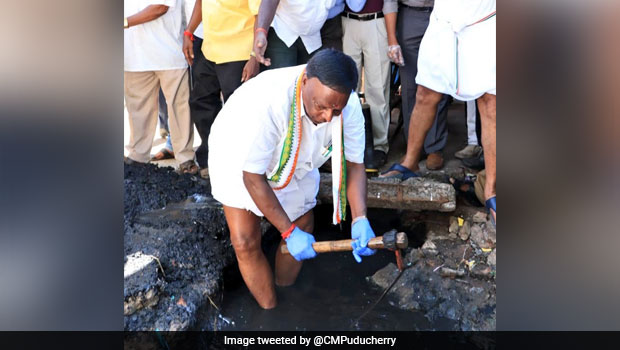 New Delhi: Puducherry Chief Minister V Narayanasamy wins everyone’s heart on social media during Swachhata Hi Seva week with his short video, where the leader is seen entering the clogged drain barefoot with a shovel in his hand to clean-up the waste and blockage. The video was a part of Prime Minister Narendra Modi’s ‘Swachhata Hi Seva’ movement which was launched ahead of Gandhi Jayanti to ensure a high standard of cleanliness across the country. The video posted on Chief Minister’s official social media handle was captioned as, “Cleaning drainage at #Nellithope #Puducherry . #SwachhataHiSeva #SwachhBharat #SwachhBharatMission.”

Since the time it has been shared, the video has garnered over 27,000 views, 1,297 likes and 106 comments. Many users appreciated the leader’s effort and even called him a role model.

Narayanasamy Ji, kudos to you for leading from the front and inspiring others to strengthen the movement to clean India.

Narayanasamy Ji, kudos to you for leading from the front and inspiring others to strengthen the movement to clean India. https://t.co/z4Tdhu31eU

Chief Minister V Narayanasamy spent around ten minutes clearing a drain, afterwards he also inspected the market place and interacted with the public to review cleanliness on ground and get feedback. He also inspected the underground sewage work undertaken in Nellithope.

The Swachhata Hi Seva celebrations that culminated on Gandhi Jayanti on October 2, also saw Puducherry declare itself open defecation free (ODF). The official ODF declaration happened at a function held at Kamban Kalai Arangam, Lieutenant Governor Kiran Bedi along with other senior officials were present at the function.

Kiran Bedi also shared few glimpses of the event on her social media platform, she said,

Historical day for Puducherry, because of the relentless efforts of the people, the Union Territory has achieved the open defecation free (ODF) status today.

Until now, Puducherry was the only Union Territory that had not got the ODF tag. The UT had already missed its initial deadline of going open defecation free by October 2, 2017, and the overall deadline for UTs of March 2018. But, finally this year on Gandhi Jayanti, Puducherry became successful in achieving the ODF status.

In the Union Territory, till date 935 individual household toilets and 57 community toilets have been constructed in the urban parts, 27,965 household toilets have been successfully built in the rural regions. Shifting the focus from ODF to sustaining the ODF tag and door-to-door waste collection system along with scientific processing and disposal of waste, Puducherry now aims to successfully achieve the status of ODF Plus and ODF Plus Plus under the Swachh Bharat Mission.

Despite Progress, 12% Of World Still Defecates In Open: UNICEF Chief

Punjab Is The Fourth State To Completely Go ODF