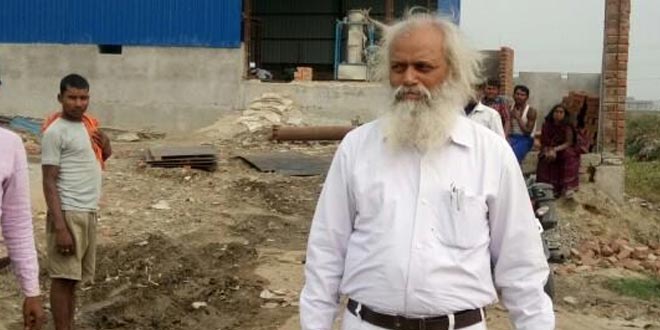 In a crowd of daily office goers, it will be hard to spot Patna’s Vikas Chandra, as he sets out for work every morning. But unlike ordinary officer goers, Chandra’s work consists of saving the Ganga from pollution and waste disposal. From cremating unclaimed corpses floating in the river to activating dysfunctional sewage treatment plants, Chandra, popularly known as Guddu Baba, has dedicated himself in cleaning the Ganga for the past 19 years.

It all started in 1998, when Chandra saw an old man bathing in the sewage-filled waters of the Ganga in Patna. When asked, the man said he was there to perform his wife’s last rites, but did not have the required Rs. 300 to hire a boat and bathe in the cleaner part of the river. This touched Chandra who decided to embark on his journey of saving the Ganga.

I was astonished to see the state the river was in and how a man had to resort to bathing in the sewage-filled waters. I decided that something must be done about this, said Chandra.

Chandra’s first stop was at the Patna Medical College Hospital (PMCH), where he encountered hundreds of unclaimed corpses lying on the river banks, along the hospital’s boundary walls. These corpses had been thrown away post dissection by the hospital authorities, polluting both the environment and the waters of the river. The apathy of the authorities inspired him to begin his crusade with the Ganga Bachao Andolan in 2000. Despite several requests to the administration, and even fasting for 48 hours, Chandra’s appeals for cleaning the river had no effect. 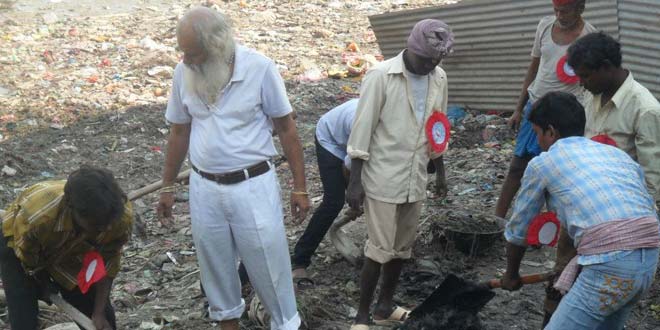 It was then that he filed his first Public Interest Litigation (PIL) on 20th July, 2000. The following year, on 16th March 2001, the Patna High Court ruled that unclaimed bodies were the state government’s responsibility and directed them to perform the last rites of the deceased. PMCH too stopped disposing unclaimed bodies in the river.

Chandra has also been vocal about waste disposal into the Ganga and played a pivotal part in reviving three sewage treatment plants at Beur, Saidpur and Pahari. Apart from the PMCH, Chandra has also filed PILs against the Department of Railways for disposing bodies into the Ganga, which resulted in a High Court order and construction of a mortuary near the Patna junction.

Also Read: Villages Along The Ganga To Be Open Defecation Free By December 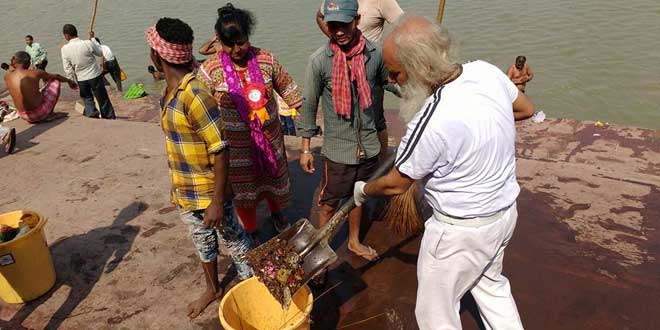 Chandra cleaning up the Ganga ghat.

Chandra has filed several RTIs to seek information from state governments on how they dispose unclaimed bodies. He found out that over 70,000 unclaimed bodies were reported from all over the country. His PIL in the Supreme Court in 2013 resulted in the apex court setting up guidelines for disposal of unclaimed bodies.

I have not been granted any funds by the government, ever. Contributions pour in from several corners, just like volunteers do. I was awarded an amount of Rs. 5 lakh in 2009 by a leading media house, all of which I’ve spent on filing PILs, RTIs and other volunteer work, said Chandra.

A double postgraduate in political science and public administration, Chandra is grateful towards his army of volunteers and the media who have believed in his work. No help from the government and several threats to his life notwithstanding, Chandra says that it is his duty to continue working towards achieving a clean environment, as he firmly believes that a clean environment leads to a clean society. Chandra’s hard work and dedication show that no mountains are too hard to topple, for a Swachh warrior like him.