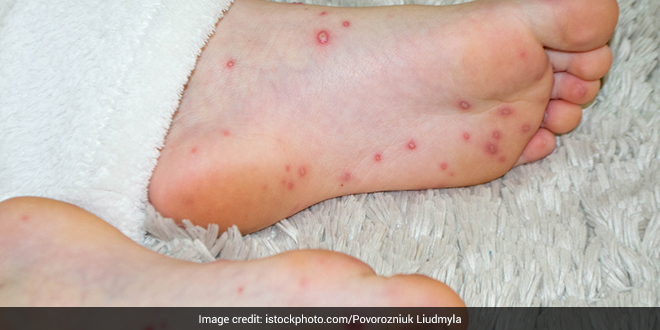 So far, cases of Tomato flu have been reported among children only

New Delhi: Tomato flu or Tomato fever is an illness that appears to be a new variant of the viral hand, foot, and mouth disease, affecting mostly children under 10 years of age. The first case of Tomato flu was reported in the Kollam district of Kerala on May 6, 2022, and as of July 26, 2022, more than 82 children below 5 years of age have been infected, as reported by The Lancet Respiratory Medicine, a medical journal.

Also Read: Lancet Warns Of “Tomato Flu” Outbreak Among Children In India. Here Is All We Know So Far

The infection gets its name ‘Tomato flu’ from the red and painful blisters that appear throughout the body and over time enlarge to the size of a tomato. As per the report, these blisters resemble those seen with the Monkeypox virus.

Talking to NDTV about the symptoms of Tomato flu, Dr Suneela Garg, Advisor to WHO and ICMR Task Force and Member of Lancet Commission said,

As the name suggests, tomato means tomato like red blisters and flu indicates flu like symptoms including fever, body ache, cough and cold. There could be gastrointestinal symptoms as well like Diarrhoea, vomiting, and dehydration.

On the other hand, the typical symptoms of Monkeypox include fever, intense headache, muscle aches, back pain, low energy, swollen lymph nodes and a skin rash or lesions.

Dr. Soumya Jagadeesan, Associate Professor, Dermatology, Amrita Hospital in Kochi elaborated on the progression of the two diseases. She said,

Hand foot mouth disease (HFMD) predominantly affects the palms, soles and oral cavity. Though the rashes can be seen over the buttocks and thighs also, it is uncommon to have extensive involvement of the body. It is usually a mild and self-limiting disease. In case of Monkeypox, the rash spreads from head to toe sequentially. Involvement of the face, genital area and palms and soles is characteristic. Different types of skin lesions starting from flat reddish patches to small, raised bumps to fluid-filled and pus-filled blisters are characteristic. The rash usually begins within 1-3 days of fever onset and lasts for 2-4 weeks. Scabs remain for a week before falling off. Unlike in HFMD, the lesions may ulcerate and leave behind scarring.

Tomato Flu or HFMD (Hand, Foot, Mouth Disease) is a far more common and very mild disease in children; very rare in adults. It spreads by saliva kisses and is airborne in nurseries and schools. Whereas, Monkeypox is detected majorly among adults and is transmitted by prolonged direct, skin-to-skin contact with index cases with skin lesions.

WHO says that Monkeypox can be transmitted through contact with bodily fluids, lesions on the skin or on internal mucosal surfaces, such as in the mouth or throat, respiratory droplets and contaminated objects.

The diagnosis of both the disease conditions is mainly based on clinical suspicion with the presence of typical rash pattern, fever, and skin lesions, along with exposure history to a suspected or confirmed positive patient. Confirmed diagnosis of disease conditions is by performing specific PCR for the viruses of the samples like discharge from lesions, skin biopsy from the site of lesions; direct microscopic examination of the lesions, electron microscopy, and viral isolation and cultures.

Both Monkeypox and Tomato flu are self-limiting diseases which means, symptoms resolve on their own, with or without any specific treatment. As per Dr Narang,

Children infected with Tomato flu should isolate for a week or until lesions dry up. On the other hand, adults with Monkeypox need to isolate for a month.

The advisory released by the centre for the prevention of Tomato flu says that there are no disease-specific drugs on the market. Adding that the recommended course of treatment is the same as for other viral infections i.e. isolation, rest, plenty of drinks, and hot water sponges to soothe itching and rashes.

As of now, no death has been reported due to Tomato flu in India. Since both the diseases are very similar, Dr Garg said,

Our immune mechanism is compromised as we are facing one infection after another; particularly among children as compared to adults. Therefore, we need to be on alert and seek expert guidance as and when the need arises. We should follow the doctor’s advice.