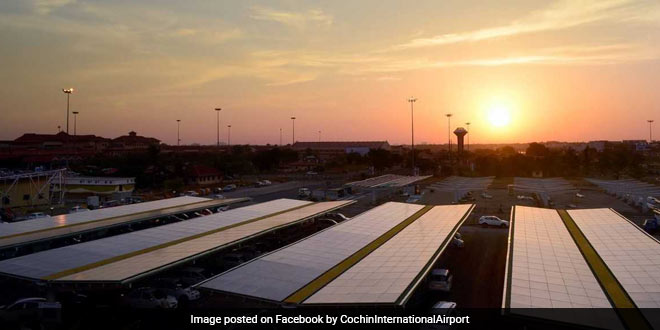 New Delhi: Year 1999, Cochin International Airport Limited (CIAL) becomes the first airport of the country to be developed under a public-private partnership. No mean achievement, it became the symbol of new India, an India that was opening up its economy and ushering in investors into different sectors, which were till then out of bounds. Cochin airport signified that and its success prompted a greater role for private players in this sector.

Year 2018, Cochin airport is yet again taking the lead. Located in the southern state of Kerala, it is the first fully solar-powered airport in the world. With the increasing number of evidence of climate change prompting the governments around the world to look for a greener source of energy to reduce reliance on fossil fuels for electricity and to decrease their carbon footprints, CIAL’s solar project is an example to be followed in the use of sustainable energy.

The fourth largest airport in India in terms of international traffic, CIAL started with a small pilot project by installing a solar energy plant with 400 panels on its rooftop in 2013. When that experiment succeeded, it decided to go all the way and now has more than 1 lakh solar panels installed that are tapping the power of the sunlight and transforming it into energy. Over the next 25 years, this green power project of CIAL will avoid carbon dioxide emissions from coal-fired power plants by more than 3 lakh metric tons, which is equivalent to planting 3 million trees or not driving 750 million miles, informs a spokesperson of CIAL.

The United Nations Environment Global Chief, Erik Solheim who had visited Cochin earlier this year noted that the initiative of CIAL can be followed by other airports around the world as well and said, “What we here at Cochin International Airport is the future.” The media release by the United Nations Environment Programme observed, “Cochin is showing the world that our ever-expanding network of global movement doesn’t have to harm the environment. As the pace of society continues to increase, the world’s first fully solar-powered airport is proof positive that green business is good business”

CIAL’s managing director Vattavayalil Joseph Kurian who pioneered the idea of making the airport a world’s first fully powered by solar energy dedicated the award to the people of Kerala who recently suffered the worst monsoon flooding since 1924, and the Chief Minister of Kerela, Pinarayi Vijayan. While talking to NDTV Mr. Kurian said,

Before becoming fully solar-powered, CIAL was procuring electricity from Kerala State Electricity Board (KSEB). As the airport operates 24×7, the power bill was very high. In 2015 the per day consumption of CIAL was 48,000 units and the per unit cost paid by CIAL was Rs. 6.8 per unit which means the airport was paying as much as Rs. 3.26 lakh per day computing to Rs. 97.92 lakh per month. These huge electricity bills prompted the CIAL management to look for alternative solutions. It experimented with a 100 Kilowatt peak (KWp) solar power plant in 2013 and then scaled up the installed capacity to 1.1 Megawatt peak (MWp) by next year and to 12 MWp by August 2015 and became fully solar-powered airport saving Rs. 3.26 lakh per day.

When we had realized that the power bill was on the higher side, we contemplated possibilities. Then the idea of tapping the green power came in. We consume around 48,000 unit (KWh) a day. So if we can produce the same, that too by strictly adhering to the green and sustainable development model of infrastructure development that we always follow, that would transcend a message to the world. Now this has become the world’s first airport fully operates on solar power.

As CIAL built a new terminal and expanded recently, the electricity requirement increased to almost 1.05 lakh units. To meet the increased requirement, more solar panels were installed. The capital cost of CIAL’s solar project was about Rs. 5 crore per megawatt while the operational cost is about Rs. 5 lakh per megawatt per annum. Currently, CIAL is producing 30 MW of solar energy for the maintenance of which it is incurring Rs. 1.5 crore per annum as against Rs. 7.14 lakh per day if the airport was still dependent on the grid-based electricity from KSEB, informed a member of CIAL’s solar project team.

CIAL has more than 100,000 solar panels now which are installed at different locations in and outside the airport. The Airport has optimally utilised the airspace over a 2-km long canal within the Airport, by installing more than 20,000 solar panels. There are solar carports (at the airport which have a capacity of 2.7MWp and provide roofing for 1400 cars parked at the Airport. All these plants together generate approximately 120,000 units of green power every day, which is more than the present daily power requirement of the Airport. Till date, Cochin Airport has produced more than 4 Crore units of solar energy worth approximately Rs. 30 Crores. CIAL is now in process of scaling up its solar power generating capacity by next month.

Also Read: Prime Minister Narendra Modi Calls For ‘One World One Sun One Grid’ For Flow Of Solar Energy Across Borders

Mr. Kurian said, “CIAL is under the process of increasing the current capacity of 30 MWp to 40 MWp which will be ready by next month and we will be supplying power to other consumers also.” By the end of November 2018, with the full swing operation of 40 MWp plants, on an average, the airport will get 1.6 lakh units of power a day whereas the consumption is expected to be around 1.3 lakh units. With the help of a power banking module worked out with KSEB, CIAL has been able to store the excess power produced during the daytime into the utility grid which can be withdrawn when solar power is not available.

The prices of solar power generation have come down significantly in India over the past few years, because of a global reduction in solar module costs and favourable government policies of competitive bidding of large projects. This has helped the industry mature and hence the generation prices have come down. CIAL has been able to gradually shift their dependence from grids based power to solar generated power. The biggest impact that this project has is the demonstration impact, it sets up a positive example and gives confidence to other big power consuming entities to put up similar projects. And when we talk about airports, especially the large airport do not have land constraint as a factor, and most large airports are gradually shifting to solar and as the economic benefit becomes more apparent those projects will be scaled up. The smaller airports, however, may take longer.

John Samuel, President of Institute of Sustainable Development and Governance, Trivandrum who is a frequent global traveller, told NDTV, “These days most of the airports in the world look the same with more or less similar architecture, facilities, and structures. But some airports stand apart. My favourite one is Changi airport in Singapore. In India, Cochin airport stands out as it has a distinct flavour. The architecture is different from others and it also is an airport with a character. One can sense the efficiency of management. The new terminal in Cochin is of international standard. The solar panel to create an alternate mode of electricity also make in a distinctive airport.”

Taking a cue from CIAL many other airports are moving towards solar energy. Indira Gandhi International Airport of Delhi currently has a solar power plant with a capacity of producing 7.84 MWp and is planning to expand to 20 MWp by 2020. Bangalore and Kolkata airports are also going the solar way. Following the suit, the Ministry of Civil aviation has instructed all airports in the country to produce at least 1 MWp power from non-conventional sources.

Even If Violated Widely, Supreme Court Order On Firecrackers Is Good Starting Point For Change: Experts