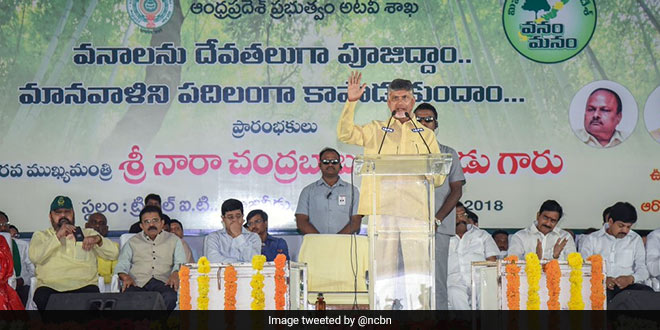 The Vanam-Manam initiative is a part of Mission Haritha Andhra, which is a government project to increase green cover in the state. The Chief Minister, while planting the first tree as a part of the Vanam-Manam initiative, said that within the next 127 days, Andhra Pradesh government was looking to plant 26 crore saplings as a part of the tree plantation initiative. To make this possible, the Chief Minister urged people from all over the state to plant trees, nurture them and in the process, increase the state’s green cover. The Chief Minister also said that all government departments of Andhra Pradesh will partake in the tree plantation drive to achieve the 26 crore saplings target.

We want to encourage citizens to make posts on social media about their best practices to protect the environment. Every citizen can take part in the revolutionary #VanamManam initiative & inspire people from all across the State to adopt an eco-friendly lifestyle. pic.twitter.com/UZ9Nmv3Z6V

I am calling out to all residents of Andhra Pradesh to do their bit to plant trees and look after them. This initiative will be taken to increase the state’s green cover. All the state government departments will also play an active part in this initiative, said N Chandrababu Naidu, Chief Minister, Andhra Pradesh.

Andhra Pradesh, which currently has green cover of 26 per cent is looking to increase the coverage to 50 per cent by 2029, said Chief Minister Chandrababu Naidu. The government is encouraging the plantation of trees, and requested people to use social media extensively to spread information about the necessity of planting trees and adopt an eco-friendly lifestyle. The Chief Minister further said that it was very important that schools participated wholeheartedly in the plantation drive, as students planting trees in large numbers also inculcates in them a sense of caring towards the environment. Thousands of students who were gathered on the occasion pledged to participate in the Vanam-Manam initiative.

The Chief Minister also attended a meeting with the Agriculture department, where it was decided that the Andhra Pradesh state government will set up organic waste management plants. The state will receive technological assistance from the Australian waste management company Expert 365, which will set up two pilot plants in Guntur and Vijayawada, work for which will begin from July 18. The organic compost from these plants will be supplied to farmers at cheap prices, said Chief Minister Naidu.

The agenda of a Swachh Andhra has been one of the key focus areas of the current state government of Andhra Pradesh. With its tree plantation programme now in full swing, the state to nearly double its green cover by 2029.