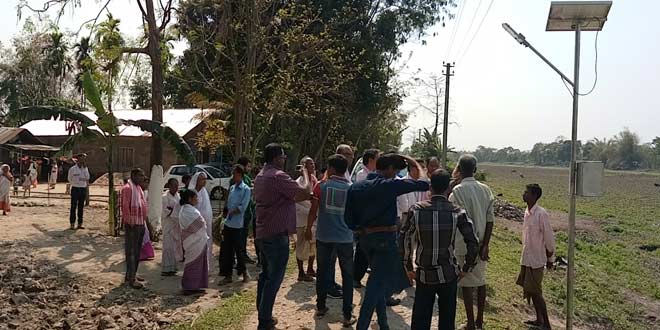 New Delhi: With no access to water and electricity, life had come to a standstill for Arun Das, resident of Gandhigaon village in Assam’s Golaghat district. In 1972, Mr Das who is a farmer had fled his flood-ravaged village to come and settle at Gandhigaon. He was among many migrants who had made this village their home. However, once they settled down, they realized that their new village was not all that it seemed to be. Despite being at the heart of the relatively prosperous Golaghat district, Gandhigaon had no amenities – no electricity, no drinking water or even toilets.

I am still puzzled how after 67 years of independence, in the heart of Assam and that too 10 kilometers from national highway and the district capital such village exist, said Mrinal Talukdar, head consultant at Taluka Nada Foundation, a local NGO.

It took 45 years, repeated complaints and promises by various officials, an active local media and a conscientious local company to turn around Gandhigaon and make it a model village.

Mr Mrinal says lack of political will; villagers’ lack of exposure, farsightedness and lack of education has been responsible for the isolation of this village. Year after year, government authorities used to visit the village and assure everyone that they would provide basic facilities.

However it was not until the local media started reporting on the situation in Gandhigaon, that the village came to the notice of oil PSU Numaligarh Refinery Limited (NRL). The company tied up with an NGO Nanda Taluka Foundation and stated the process of developing the village.

The project aimed at providing solutions to fundamental issues of water, sanitation and electricity. 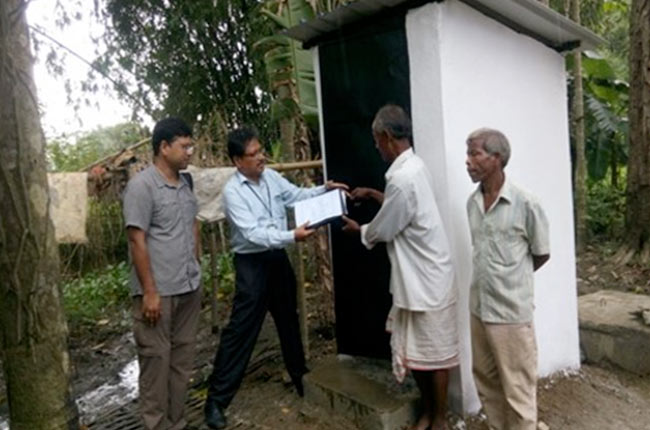 The villagers waited 45 years for a toilet

Turning Around The Water Crisis

Until this year, Lake Veel was the one and only source of water in the village, for everything from drinking to farming.

A baseline survey conducted by the Nanda Taluka Foundation in 2015 found that Lake Veel had traces of iron components because of which nearly 67% of the population suffered from various stomach problems. “Many villagers had contracted deadly diseases like diarrhea and cholera. Due to kacha roads, it became very hard for us to get medical treatment and we had to travel for 3-4kms to get medicines,” says Mr. Das

To tackle the water borne diseases, every family, most of them living below the poverty line, used to end up spending nearly Rs 300 every month to buy medicines. In many cases, the families couldn’t afford treatment and had to keep suffering.

The first step towards transforming the village was to clean up its water, which NRL did by setting up a Reverse Osmosis (RO) plant.

I was shocked to see that all the villages around Gandhigaon had basic facilities. This village, however, was left out from the human civilization. Providing basic facilities like water became the need of the hour, said Pankaj Baruah, Deputy General Manager of CSR at NRL.

The RO plan, built at a cost of Rs 8.2 lakhs is now run and maintained by the villagers themselves. Every household now receives 25 litres of pure drinking water everyday by paying a monthly maintenance fee ranging between 75-100 rupees. Water-borne diseases have drastically come down.

On asking if the plant can improve overall health condition of village, Mr Baruah said “The RO water quality is as high as bottled water, free from chemical impurities. It will take a year or so to bring an impactful change.”

For so many years, I lived in constant fear of being infected by the filthy water as I have four children, but now with the construction of this plant, I am hoping that something as basic as water will no more be a threat, says a much relieved Mr Das.

Solving the problem of Open Defecation

The next problem that needed urgent attention was the problem of open defecation. Not a single household had seen a proper toilet in 45 years.

Last year, 77 high quality toilets were built at a cost of Rs 26,000 per toilet, and handed over to the villagers.

The village is surrounded by a number of river tributaries that were constantly getting polluted due to open defecation, and the construction of toilets has resolved sanitation issues to a great extent, added Mr Buruah.

For villagers who spend close to 5 decades without the most basic amenities, the past year has been nothing short of a miracle.

For me this transformation is incredible. In such an uncivilized backdrop, works of NRL-NTF are unbelievable and shall termed as divine intervention, said Mrs Munumai Das, Panchayat Ward Member.