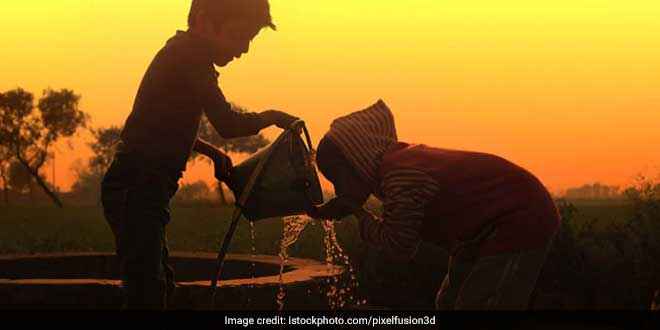 New Delhi: With water fast becoming a stressed resource and the Narendra Modi government focusing majorly on water conservation and accessibility, as part of ‘Har Ghar Jal’ to provide water to every household, a major work on mapping the fast depleting groundwater reserves is on across the country. India has 447 billion cubic metres of replenishable groundwater reserves, of which 60-70 per cent goes off in irrigation. The government has launched mapping of the groundwater reserves of the 24 lakh square kilometre (sqkm) of the mappable area, of which 10 lakh sqkm has been mapped, and the rest will be completed over the next year or so.

While depletion of surface water is visible, in the form of shrinking or drying up water bodies like ponds and rivers, in the case of groundwater it is invisible as it is deep underground. But it is not an infinite source of water, and its replenishment is slow.
Groundwater is a precious resource and the challenges of its fast depletion are being tackled by the government under the new Jal Shakti Ministry — the merged entity comprising the earlier Drinking Water and Sanitation, and the Water Resources and Ganga Rejuvenation ministries.

India’s per capita availability of water is 1,400 cubic metres per year, while it gets 4,000 billion cubic metres in the form of precipitation, like rain and snow.

With most of the rainfall flowing off, the focus would now be on how to best utilise the water resources, through localised rain water harvesting in cities and homes. As part of the water conservation efforts, Prime Minister Modi had written to over 2 lakh village heads (sarpanches) last month to conserve rainwater during the monsoon. The letters were hand delivered to each sarpanch.

While the water availability presents an alarming picture, there are many good initiatives taking place across the country and could be learning points. In Rajasthan, the traditional form of rainwater harvesting, of building storage tanks under the house, called ‘tanka’, are very effective in conserving water.

Among other measures would be to improve the water use efficiency of dams, as most of the water used in farming through dams is lost through leakages and evaporation.

Another factor to be considered is that water-guzzling crops like paddy, wheat and sugarcane use up 80 per cent of the irrigation water, which means that the other crops like millets are able to survive on little water. But to make farmers diversify from paddy and wheat to millets would not be easy and for this many other factors, like people’s choice, the market among others, would have to be taken into consideration.

As water is a state subject, the central government provides states with the technical know-how and financial help in managing water resources. Many states have set up bodies for conserving water, like Rajasthan’s ‘Mukhya Mantri Jal Swavlamban Abhiyan’, Maharashtra‘s ‘Jalyukt Shivar Abhiyaan’ to make the state drought-free, Telanagana‘s ‘Mission Kakatiya’, ‘Neeru-Chettu’ in Andhra Pradesh and ‘Sujalam Sufalam Abhiyan’ in Gujarat.

The Government of India also provides funds to states for water conservation/water harvesting through the MNREGA (Mahatma Gandhi National Rural Employment Guarantee Act), with Rs 60,000 crore being made available annually.
The government last week launched a campaign for water conservation and water security to focus on 1,592 “water stressed blocks” across 256 districts.

As part of the push, senior officials have been deployed across the country to assess ongoing schemes and plan ways to conserve water. They would also focus on Behaviour Change Communication to convince people to conserve water, and make it into a habit. Akhil Kumar, Joint Secretary, Ministry of Water Resources told IANS,

Water conservation is planned to become like a Jan Andolan, or mass movement, with peoples’ participation. Following the Prime Minister’s directive, it has been taken up in mission mode.

Electric Vehicles: India’s First Electric SUV Launched This Year, But Are We Ready For The E-Revolution?