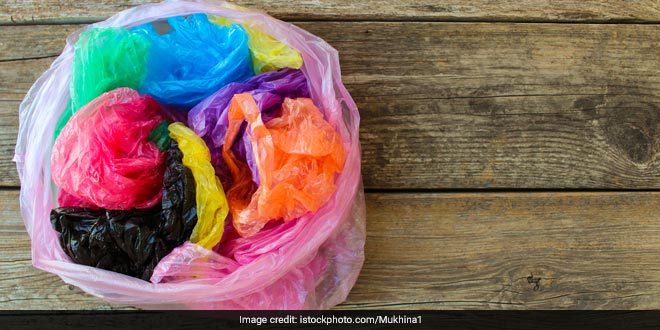 New Delhi: On February 18, 2016, Department of Local Government, Punjab, issued a notice prohibiting the manufacture, stocking, distribution, recycling, selling or use of plastic carry bags in the state, with the effect from April 1 the same year. Even three years after the ban was notified and put into effect, the use of plastic carry bags continue in the state, as is evident from the recent surprise checks. To check the efficacy of the ban on plastic carry bags in Punjab, on Saturday (June 15), the Punjab Pollution Control Board (PPCB), Department of Rural government and Department of Local Bodies carried out statewide raids and seized 40 tonnes (40,000 kg) of banned plastic bags. The team carried out a surprise check at 500 shops and 200 violations were detected.

40,000 kg of plastic carry bags were confiscated during the raid of which 11,000 kg were collected from Fatehgarh Sahib District alone, informed K S Pannu, Director of Department of Environment, while speaking to NDTV.

Continuing with the spot check on Monday (June 17), PPCB and Department of Local Bodies impounded 35,000 kg of plastic carry bags of which 10,000 kg were accumulated from Ludhiana.

Punjab Plastic Carry Bags (Manufacture, Usage and Disposal) Control Act, 2005, defines ‘carry bags’ as plastic carry bags either having a self carrying handle or ‘D’ punched handle or not. The act also levies a fine of Rs. 500 on the use of plastic carry bags, along with seizing of banned plastic.

In 2016, when the government banned all kinds of plastic carry bags in the state, shopkeepers and individuals made an eco-friendly switch to cloth bags and jute but the change didn’t last long, because alternatives to plastic are expensive.

Mr Garg is of the opinion that education, awareness and stringent laws are the keys to effective implementation of the ban. In a bid to educate and make individuals aware about the health and environmental hazards of using plastic, the department is going door-to-door for direct interaction, reaching out to households via advertising and distributing jute bags.

Further talking about how the ban can be effectively executed in the state, Mr Garg says,

Stringent action needs to be taken against individuals involved in the trading of carry bags. The government should come out with instructions that ban the import of plastic carry bags in the state.

As per the information shared by the PPCB, the state generated 54,000 tonnes of plastic waste in 2017. The collected plastic waste along with other unsegregated waste was sent to the landfill.

The MLPs waste is often seen lying unattended in the state. Since it has no alternative use, even rag pickers don’t collect it. To manage this waste we have established Punjab Plastic Waste Society wherein 35 brands or producers like Nestle, Pepsi, Vadilal, Cremica, among others have been given the task of managing their MLP waste.

This is being done using the Extended Producer Responsibility (EPR) – a policy approach under which producers are given significant financial responsibility for the collection and treatment or disposal of multi-layered plastics.

The 35 producers have been asked to collect the MLP waste from the state. Last year, they were given the target of collecting 500 tonnes of MLP, but together they managed to accumulate 1100 tonnes of MLP, which is more than double the target. The collected waste is either used in the construction of road or as fuel in cement plants, said Mr Garg.

For research purpose, on a pilot basis, half a kilometer of road was constructed using MLP waste. Currently, the road is being scrutinised, depending on the results, PPCB will take forward the project. But the challenge continues to be lack of alternatives to plastic bags.

For now, to put a full stop on the usage of banned plastic products and ensure compliance of the law, PPCB, Department of Rural government and the Department of Local Bodies plans to continue with more such surprise visits.