New Delhi: Way before superheroes like Spiderman, Superman and Batman made their way into our lives, Indian children and even adults had their own superhero – Chacha Chaudhary. The wise old man Chacha Chaudhary has entertained people across generations even before the advent of cable television. He would move from home to home, spreading joy and wisdom through a humble comic book. With big white mustache, a red turban and a walking stick in his hand, Chacha Chaudhary’s ability was to solve problems. The ageless iconic hero from the 1970s has now made a comeback to not just entertain but also give a message on hygiene. This time he is Dettol’s superhero!

Dettol Banega Swasth India along with Diamond Comics has introduced ‘Dettol Superhero’, a comic book for children. In this special edition, ‘hygiene’ is the topmost priority for the superhero as they fight against germs and protect children. The basic idea is that hygienic life equates to a healthy life. All stories are weaved around interactions between the children and hygiene superhero in various settings, primarily three settings: home, neighbourhood, and schools. 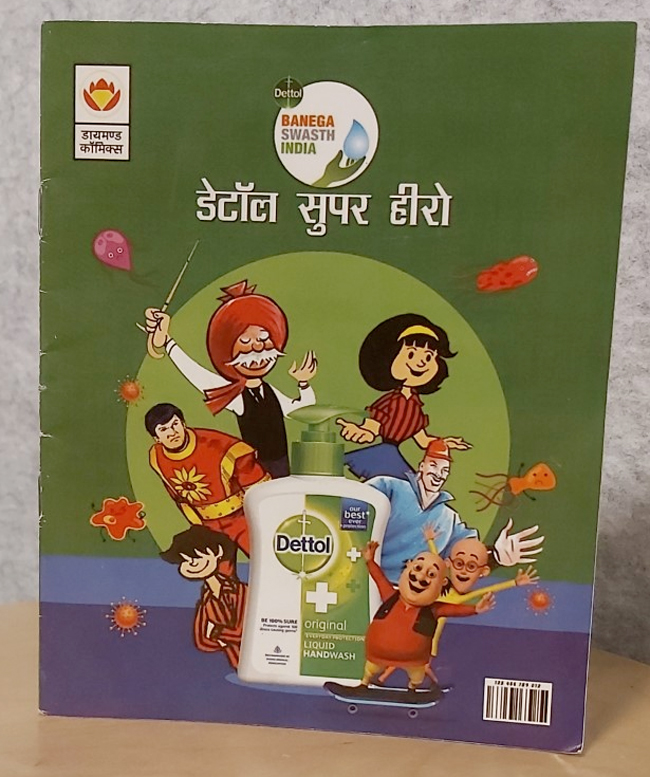 With Chacha Chaudhary, other superheroes like Shaktiman, Saabu, Pinky and Billu have also come. Interestingly, not only beloved superheroes are playing the role of hygiene heroes. The idea is that all kids can become hygiene heroes by following a few protocols and actively fighting germs.

To reach a wider audience, the comic book has been released in multiple languages – English, Hindi, Marathi, Tamil, Telugu, Kannada, Spanish and Portuguese.

One thing that hasn’t changed for kids despite everything that has changed around us is their love for stories and comic characters. Chacha Chaudhary is one character that cuts across generations. In fact, there is a group of characters. Everyone loves those stories. We were looking at different ways to communicate the message better about hygiene and that is how we came up with stories.

The Diamond Comics team worked with the Banega Swasth India team to construct the stories and visualisation. Inputs of storytellers, programme implementers and children were gathered to figure out the narrative and storylines. Richa Shukla, an Educationist is one of the brains behind this innovative message. Ms Shukla extensively worked on this project and explained the role of comics in education. She said,

There is a lot of research behind positive role modelling. When certain characters fascinate children and if you really have these characters impart some important critical messages that become a part of children’s lives. The character Chacha Chaudhary and others have always modelled certain things in a very positive light whether it is about problem solving or thinking. Messaging has to be age appropriate and done in a fun way. Our stories have a lot of conflict in them, some drama, superhero influence and power.

It is a very dynamic, evolving children’s world today. They are living in the world of Marvel and Disney but that is about metro kids. There is a larger population that still does not have access to this. Therefore, what if our beloved old characters are able to drive change among the population that needs it the most. In addition, if characters have an impact on children, they are likely to follow what they are teaching. Our characters are not preaching; they are doing it in a form that appeals to kids more which is bringing in a lot of action and drama into it.

A Peek Inside ‘Dettol Superhero’

The story is about the animated microorganisms attacking the school washrooms and toilets and spreading infection, resulting in students falling ill. This is brought to the headmaster’s attention, who dials Chacha Chaudhary and urges him to visit the school premises to contain the situation.

Chacha Chaudhary asks the headmaster if the school had maintained a “hygiene corner’. On finding that the management was unaware of the concept, the iconic comic character details out the importance of having a designated place in the school that has all the materials related to the practice of hygiene, such as soaps, handwash, hand sanitisers, among others. Chacha Chaudhary said,

If kids are not aware of the importance of hygiene, the germs will definitely attack. 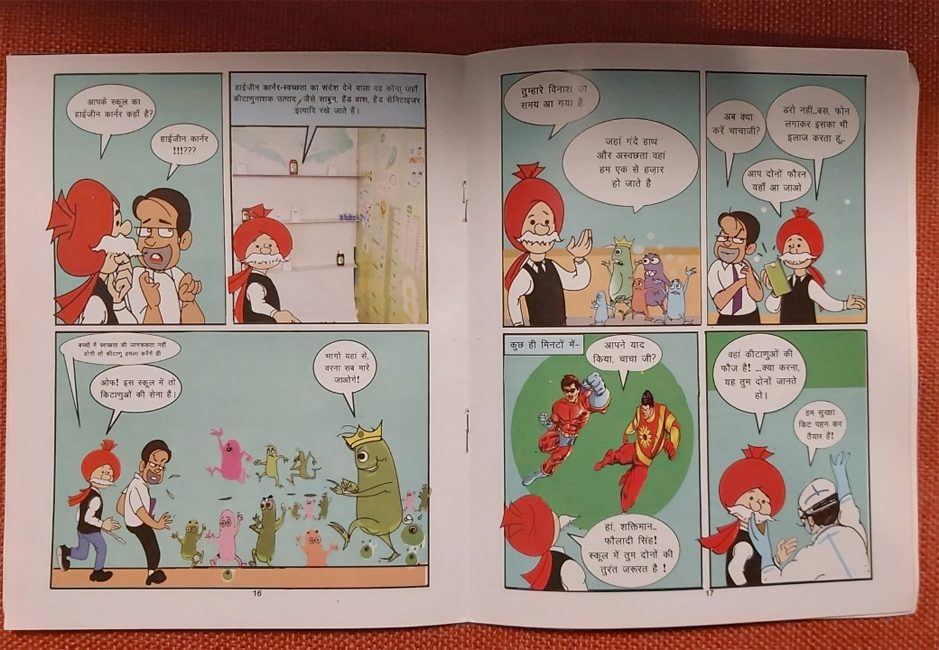 An excerpt from the story “Swachta School Mein”

With the help of superhumans like Shaktiman and Fauladi Singh, sanitation places in school is cleaned, and a ‘hygiene corner’ is set up.

The character then details out the correct way of washing hands and maintaining personal hygiene.

“Swachh rahoge toh swasth rahoge (If you will stay clean and maintain hygiene, you will be healthy),” Mr. Jafferi ends with the moral of the story.

Mr. Jafferi lauded the concept of using a comic book to teach the students about hygiene. He added,

Because of the audio-visual hype in recent years, students have forgotten to turn towards reading in general. The trend of comic books has almost died, but this concept brings it back to life. This will also help develop a reading habit among children.

There are more such stories in the book that talk about cleanliness in the neighbourhood and at home. The book launched earlier this year has already made its way to the hearts of hundreds and thousands of children. Sharing the plans with regard to taking the book to every corner, Dr Sistla said,

We are aiming to ensure that the comics reach every school we work with. We have covered 50 per cent of the schools with the comics. We are also collecting feedback on the stories and the experience of the students and teachers. The aim will be to make them better, and perhaps diversify into audio versions of the same, that can be disseminated to a wider audience.

Also Read: How Dettol’s Hygiene Curriculum Is Changing Lives Of The Children