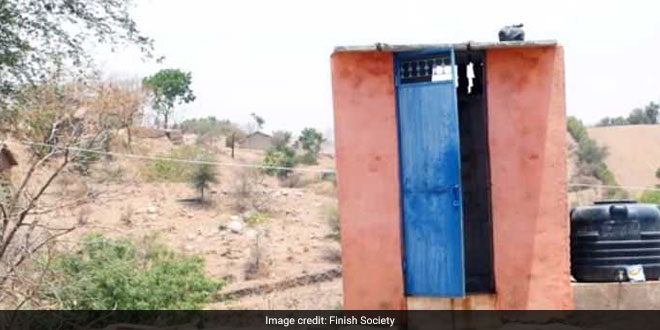 The rocky and barren hills of Rajasthan’s Dungarpur district witness the daily struggles of people. Sun baked rocks with nearly nil vegetation and limited sources of water. Inhabitants of Dungarpur, Rajasthan’s southernmost district with a population of over 13 lakh in 989 villages, had too many daily struggles to deal with to worry about toilets and the benefits. Open defecation was a widespread practice. Today, the district boasts of sanitation coverage of above 92 per cent. This miraculous turnaround that happened in a year was made possible by a community led united approach, which prioritised sanitation above anything else.

Till 2015, only 12 per cent of Dungarpur’s population had access to toilets. Worse, only 2 per cent used these as scarcity of water made defecating in the open easier. Women had to bear the brunt of the practice as they could only venture out to relieve themselves before sunrise or after sunset, not during the day. This unhygienic practice had adverse effects on the health of women of the district’s villages, as regular occurrences of urinary tract infection, diarrhoea and other diseases were reported. 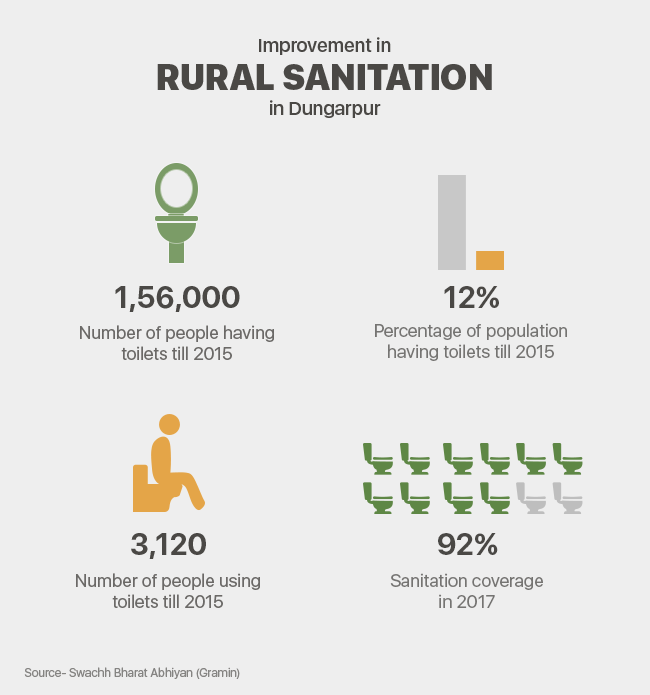 In Dungarpur, till 2015, people either did not have toilets or did not use them and none of these were ideal situations for sanitation. Even after a year of the Swachh Bharat Abhiyan, people remained unaware of the sanitation mission as for them, their daily struggles kept them aloof from thinking of better sanitation solutions, said Ashok Kumar, Additional District Collector, Dungarpur

In January 2017, the district administration, on realising that the sanitation scenario in Dungarpur needed accelerated improvement, partnered with the NGO Financial Inclusion Improves Sanitation and Health (FINISH) society and laid out a comprehensive plan to build toilets in the district’s households and simultaneously inculcate behavioural change among the district population. 45 gram panchayats were chosen to and it was decided by the district administration that to cover over 900 villages in these gram panchayats, volunteers on behalf of the FINISH society as well as the district administration will visit homes of villagers. The volunteers began noting down the grievances of the villagers, especially of the women who complained about how difficult it was for them to go out and relieve themselves, especially during their menstrual cycles.

For us, there were several hurdles initially as far as convincing the villagers were concerned. Years of negligence had also shaken their beliefs in any efforts to improve sanitation, and they were of the opinion that a bag of cement and sand cannot be enough to solve their toilet problems, said Mr Saurabh Agnihotri, member, FINISH Society.

The women of Dungarpur were however, way more welcoming towards the district officials and FINISH society members. Unlike the men, the inability of the women to go out anytime they wanted was also a point which was spoken about in extensive detail during the house visits. Since community led total sanitation was the approach undertaken at Dungarpur, many women took an active interest in the construction of toilets. As construction materials started arriving in the villages of Dungarpur, women picked up sacks of cement and sand and joined volunteers, administrative officers and fellow villagers to begin construction of toilets in May 2017. To ensure that newly constructed toilets do not run out of water, water tanks were also brought to be fitted along with the toilets.

When the materials began arriving, we decided we must help. We had to face the worst situations due to unavailability of toilets in our villages and the only constructive way of helping was to involve ourselves in toilet construction. The terrain is rocky and uneven and local help was highly appreciated by the administration. In many places where vehicles with materials could not reach, we would transport the materials manually, said Kokila Damor, resident of Dungarpur Tehsil.

The administration and FINISH agreed upon a 100 day approach and the target for the first 100 days was set at 100,000 toilets in the same number of homes. By July 2017, over 75,000 homes had toilets in them and 45 gram panchayats became completely open defecation free. To ensure absolute behavioural change among people, the village women also took it upon themselves to monitor homes in their respective villages and see whether the toilets constructed are being used. This initiative was taken up voluntarily by the women of Dungarpur’s villages. The mission saw the involvement of over 600 volunteers, 300 community leaders and 400 masons, making it one of Rajasthan’s largest rural sanitation missions.  Dungarpur’s sanitation mission has not been restricted to merely its villages. FINISH society, in participation with UNICEF has undertaken a programme in 150 schools to equip them with toilets, hand washes and give rewards for practicing safe sanitation.

Dungarpur’s success story involved a lot of hard work to tackle ground realities and challenges and credit goes to the villagers, especially women, who worked hand in hand with volunteers to ensure that the sanitation scenario undergoes a thorough change. The success of the community led total sanitation initiative sets a good example for other districts where safe sanitation remains an alien concept.

For the Swachh Bharat Abhiyan to become a success, Dungarpur’s model can be replicated in other rural districts where scores of men and women have no access to safe sanitation.