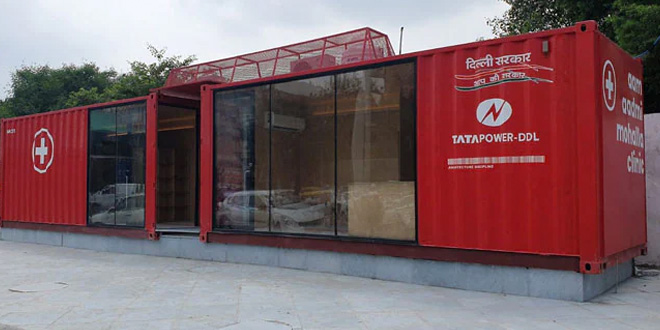 New Delhi: With an aim to cater to the healthcare needs of people in slum areas, the Government of Delhi has launched new mohalla clinics that can be easily installed in congested areas. Made out of shipping containers, these portable clinics are more compact than previous designs and thus solving the government’s big hurdle – the lack of land in the capital, according to Delhi’s Health Minister Satyendar Jain. The first such clinic has been installed in the Rani Bagh are of Shakur Basti, the assembly constituency of Mr Jain.

According to Mr Jain, this is one of the two clinics prepared in shipping containers on a pilot basis. He said,

After they are commissioned, feedback will be taken, based on which, further action will be taken. Delhi government is preparing more such projects to revolutionise the healthcare system in the capital.

Mr Jain took to Twitter to announce the launch of mohalla clinics and said that the project will help in easy setup and transport in cluster areas and narrow streets where healthcare infrastructure is less accessible.

Visited the construction site of 2 new Mohalla Clinics at Shakurbasti. These Clinics have been set up in portable containers.

Such Clinics are easy to set up & transport in Cluster areas like Jhuggi-Bastis & narrow streets where healthcare infrastructure is less accessible. pic.twitter.com/YTF8OcPokn

This is just the beginning. Delhi Govt is preparing more such projects to revolutionize the healthcare system of Delhi. pic.twitter.com/p3HpGDTpsM

The area covered by each new clinic is roughly 350 square feet, while the space taken up by the previous models was 600 square feet each. The small space has been divided into several sections, which include waiting area for patients, a pharmacy and an area for test sample collection.

Built at a cost of about Rs. 20 lakh each, the air-conditioned portable clinics are being made by connecting two shipping containers. According to Mr Jain, the cost of the new design is currently similar to the mohalla clinics built as per the previous design, however, once the government is hoping a reduction in this cost as they start bulk production of the new clinics. Mr Jain added that the idea behind the new design of mohalla clinic is to reduce the time as the construction of clinics takes 3-5 months while this is made in a factory which takes only three to four days to be installed.

There were issues of thefts arising at mohalla clinics but these shipping containers are made of sturdy material and will be able to withstand the danger of thefts, Mr Jain said.

The Mohalla Clinics Of Delhi

Mohalla clinic is one of the flagship initiatives of the state government to boost the primary healthcare system in Delhi. A typical mohalla clinic has a doctor and a midwife-cum-nurse. It provides an array of diagnostic services and essential medicines free of cost. The first mohalla clinic of Delhi was inaugurated on July 19, 2015 in Rajiv Gandhi JJ Punjabi Colony, a relief camp in Peeragarhi. The Government of Delhi has said on multiple occasions that it aims to build 1,000 mohalla clinics in the capital. It has built about 500 clinics so far on rent basis or in porta cabins at some places.

Also Read: COVID Warriors: Meet The ‘Ambulance Couple’ From Delhi Who Has Been Providing Free Service For 20 Years Now

Related Topics:
Delhi Health
Up Next