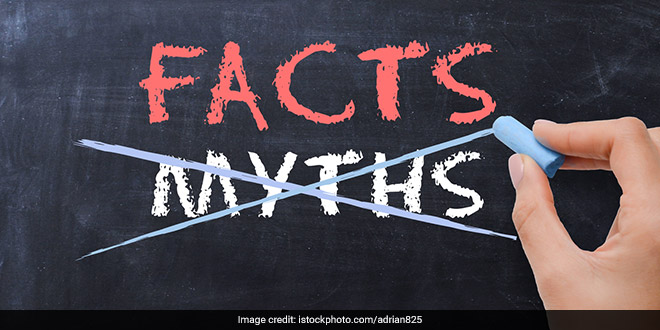 New Delhi: According to the World Health Organisation (WHO), the spread of HIV and AIDS has affected crores of people worldwide. As pre an estimate by the Joint United Nations Programme on HIV/AIDS (UNAIDS), over 3.8 crore people are living with HIV worldwide. UNAIDS recommends that awareness can play a vital role in combatting the disease. On the occasion of World AIDS Day, which is celebrated every year on December 1 to raise awareness among people about HIV and AIDS, NDTV spoke with Dr. Veena Aggarwal, Gynaecologist, Consultant Women’s Health, Medtalks.in, an online medical platform which provides continuous medical education to doctors and paramedical staff and Dr. Tanaya Narendra, Sexual and Reproductive Health Expert, Pee Safe, a manufacturer of daily hygiene products to debunk some of the most common myths and misconceptions around the infection. Experts asserted that misconceptions can prevent individuals from making informed choices and taking appropriate actions on time in order to live longer and healthier lives even with HIV.

Fact: HIV does not always lead to AIDS

HIV (Human Immunodeficiency Virus) is the virus that can cause AIDS (Acquired Immune Deficiency Syndrome) but this does not mean that all HIV positive persons will develop the disease. Early treatment of HIV infection can prevent AIDS. Dr. Aggarwal explained,

If a person is HIV-positive, it means they have the HIV virus in their body. AIDS is a syndrome of immune system deficiency that is the result of HIV attacking the immune system over time and is associated with weakened immune response. AIDS is the last stage of HIV infection but it can be prevented easily if a person takes medication to keep the levels of HIV infection under control. This can help in maintaining a healthy immune system for a long time and therefore preventing other infections caused due to weaker immune response and a diagnosis of AIDS.

Fact: HIV infection does not only occur in homosexual men and drug abusers

According to Dr. Narendra, this is one of the most common misconceptions since the beginning of the epidemic. She said that anyone who does not practise safe sex or uses contaminated needles can get HIV and if left untreated without medication to stop replication of the virus in their bodies, they can develop AIDS.

HIV cannot be transmitted through touch, tears, sweat, saliva, or pee, said experts. They said that one cannot catch it by activities like breathing the same air, touching a toilet seat or door knob or handle, sharing utensils, hugging, kissing, or shaking hands. Dr. Aggarwal said,

“This is such a common myth, I don’t know who started it and why? Even though the virus is passed through blood, there is no need to be worried about a vector carrying it,” said Dr. Narendra. She added that while biting or sucking blood, insects do not inject the blood from a person or animal they had bitten earlier.

FACT: There is a need of using protection even if both partners are HIV-positive

Fact: According to Dr. Narendra, using protection during sexual intercourse is extremely important, no matter what the HIV status of an individual is. She said,

The HIV virus has many strains. Also, the viral load among individuals differs. While one person may have low viral load, another may have high. Thus, the risk is always there of their condition getting worse. Besides, there are many more diseases that can spread through unprotected sex such as herpes and gonorrhoea.

FACT: Having HIV does not mean death

She added that HIV positive individuals who are receiving proper antiretroviral therapy (ART) can expect to live a normal life span, so long as they take their prescribed medications and follow a healthy lifestyle to avoid other infections.

FACT: HIV-infected women can have children

Dr. Narendra said that while it is true that a mother can transmit HIV to the child during pregnancy, childbirth or later on while breastfeeding, it can be prevented by taking the required treatment. She said,

A woman with HIV who is preparing for pregnancy must take help of her healthcare provider to begin ART (antiretroviral therapy) treatment, recommended for HIV, as soon as possible. The risk of transmitting HIV to the baby can be reduced to a significantly less levels if a woman takes her medicine daily as recommended by a healthcare provider throughout her entire pregnancy including labour and delivery and continues medicine for her baby for four to six weeks after birth.

The WHO says that an HIV-positive woman can breastfeed her baby through the first year, provided she has an undetectable viral load in her body and she takes antiretroviral drugs throughout the period of breastfeeding.

According to Dr. Narendra, as of now, there is no cure for HIV. However, she said that it can be kept at the level at which it cannot be detected via tests through medications meant for reducing the replication of the virus which reverses the immunodeficiency syndrome. Dr. Aggarwal said that suppressing the viral load to undetectable levels makes individuals living with HIV far less likely to pass the virus to others. However, due to the lack of awareness and the stigma around AIDS, people hesitate to get tested and take proper treatment. This not only puts them at risk of developing chronic life-threatening conditions but also puts others at the risk of contracting the virus.

Also Read: World AIDS Day 2020: A Look At How HIV-AIDS Has Been Impacting The World